PAUL ACROSS AMERICA
US Route 271 runs through northeast Texas, southeastern Oklahoma, east-central Oklahoma, and a tiny crossover into Fort Smith, Arkansas.  Fort Smith is where US Route 271's northern extent lies, barely crossing into Arkansas to end at the business alignment of US Route 71.  From there, US Route 271 heads southwest to Hugo, Oklahoma, south to Paris, Texas, and southeast to Mount Pleasant, Texas, where it meets Interstate 30.  Continuing onward, US Route 271 moves south to Gladewater, then southwest to Tyler, where it ends.  US Route 271's southern end is not at a US Route or Interstate, but at Texas Highway 31, the main east-west route through Tyler. Tyler has an array of different highways, including US Route 69, so I don't see how US Route 271 couldn't be rerouted on other state-maintained highways to get a proper end at US Route 69.  (Or maybe we make Texas Highway 31 into a US Highway like 184 or 480!  Okay, maybe not. I'm getting carried away.)  Anyway, the southern end of US Route 271 is at Texas Highway 31 on the east side of Tyler. 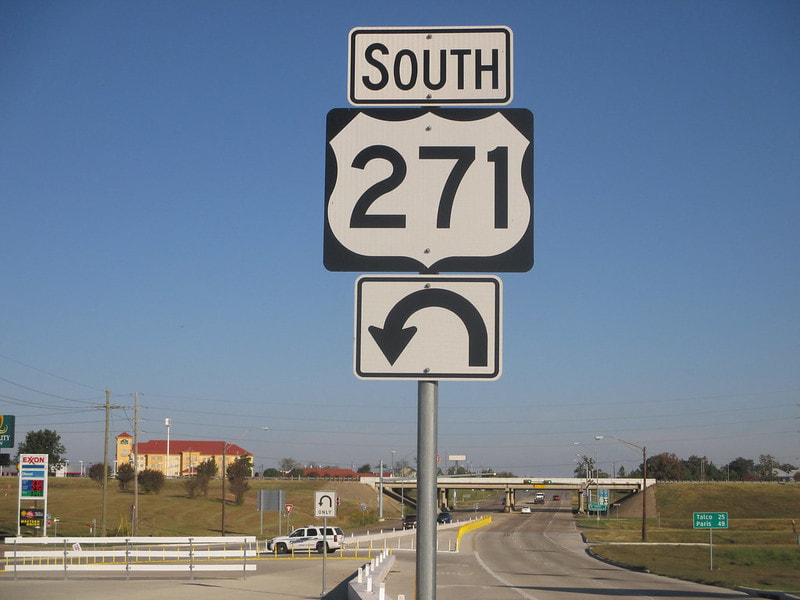 The sign assembly you see in my photo for US Route 271 sits on the median of US Route 271 facing south, in Mount Pleasant, Texas.  The photo was taken between Interstate 30, which sits in the background, and US Route 67, which lies just behind the aperture. In this area, US Route 271 is a divided highway, with only a few select points where one can cross the median (a "Michigan left" setup).  At the time I took this photo in October 2014, along the return home from my first Gulf Coast trip, this was the first time I saw a supplemental U-turn sign panel below a route marker.  Taking this U-turn should be the only way for westbound traffic on US Route 67 to access US Route 271 south--but the left turns at the intersection of those two routes are allowed, defeating the purpose of the "Michigan left" setup. When taking this photo, I was hoping that the driver of the police car, seen in the background making the U-turn, didn't think I was doing anything suspicious.
Back to the nationwide main page.
Back to the home page.