PAUL ACROSS AMERICA
US Route 75 runs from Dallas, Texas, north to he Canadian border in the northwest corner of Minnesota.  The northern end is a closed border crossing at Noyes, Minnesota, and it's closed because it's just across the river from the border crossing used by Interstate 29 in Pembina, North Dakota.  From this northern end, US Route 75 heads south along Minnesota's entire western border, penetrating into northwestern Iowa up until Sioux City.  At Sioux City, US Route 75 crosses into Nebraska, to follow along that states' eastern border; it forms the main north-south freeway passing through Omaha's city limits (Interstate 29 lies just to the east in Iowa, technically).  US Route 75 continues south through eastern Kansas and eastern Oklahoma, passing through Topeka and Tulsa.  In McAlester, Oklahoma, US Route 75 deflects southwest to end as a freeway in Dallas, Texas. The southern extent of the US Route 75 freeway becomes the northern extent of Interstate 45 in Dallas, at an interchange with Interstate 30. 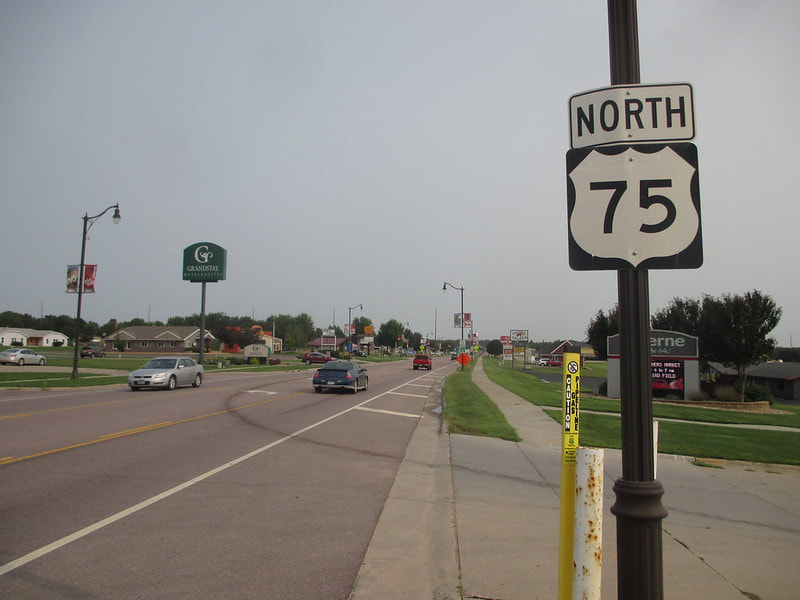 I wanted to have at least one photo in my collection demonstrate Minnesota's approach to US highway signs.  That photo ended up being my US Route 75 photo, the northbound trailblazer posted just north of the Interstate 90 interchange in Luverne, a town way in the southwest corner of Minnesota.  This photo was taken along the return trip from the drive to the Pacific Ocean, featuring visits to Glacier National Park, Astoria in Oregon, and Yellowstone National Park, in August 2018.
Back to the nationwide main page.
Back to the home page.