PAUL ACROSS AMERICA
US Route 67 runs north-south in easternmost Iowa, western Illinois, and eastern Missouri, before becoming a diagonal route southwest through Arkansas to Texas.  The northern end is just outside of the island village of Sabula, Iowa (the island is on the Mississippi River), at US Route 52.  From there, US Route 67 follows the west bank of the Mississippi River into the Quad Cities, where it crosses the River into Illinois.  US Route 67 runs through western Illinois to cross back to the Mississippi River's west side, entering Missouri and the St. Louis area. After that, US Route 67 heads south through southeastern Missouri to Walnut Ridge, Arkansas, where it becomes a freeway diving southwesterly into Little Rock. From Little Rock to Dallas, US Route 67 parallels Interstate 30. Beyond Dallas, US Route 67 runs more westerly than southerly, but the southerly progress is enough to take it to its final destination: the Mexican border crossing in Presidio, Texas. 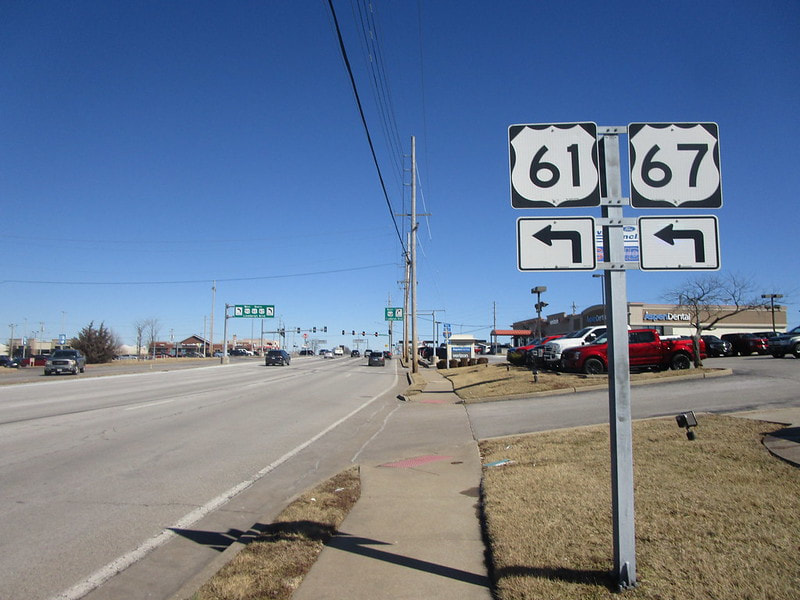 My photo for US Route 67 came from a local trip around the Midwest, in February 2022. The sign assembly shown faces south along a roadway in Mehlville, Missouri, that carries US Route 61 and US Route 67, but only until the intersection visible in the background.  Both US highways make a left turn onto US Route 50, which passes from left to right through the intersection in the background. (Continuing straight ahead will put you on Missouri Highway 267.)  I have photographed this sign assembly twice, actually!  The first time was in January 2019 as part of my third trip to the Gulf Coast, but the lighting was poor due to overcast skies.  Since I was stopping for lunch at the same spot in February 2022, I ended up photographing the same assembly in the decidedly better lighting.
Back to the nationwide main page.
Back to the home page.