Zion National Park is a heavily-visited park among the red rock landscapes of southwestern Utah.  We saw the Emerald Pools Trail, the Canyon Overlook Trail, and some other low-hanging fruit while in the park.  Our visit was only a cursory one-day visit in April 2017, but we would love to go back and see more of the park.  The Angel's Landing Trail and The Narrows Trail are legendary, but they require a great deal of fitness and hiking experience--things we lacked, as this was the first national park we visited.

The trail to the Emerald Pools begins at a trailhead along the Virgin River Canyon road, reachable only by bus.  Embarking on the trail started with a footbridge over the Virgin River. 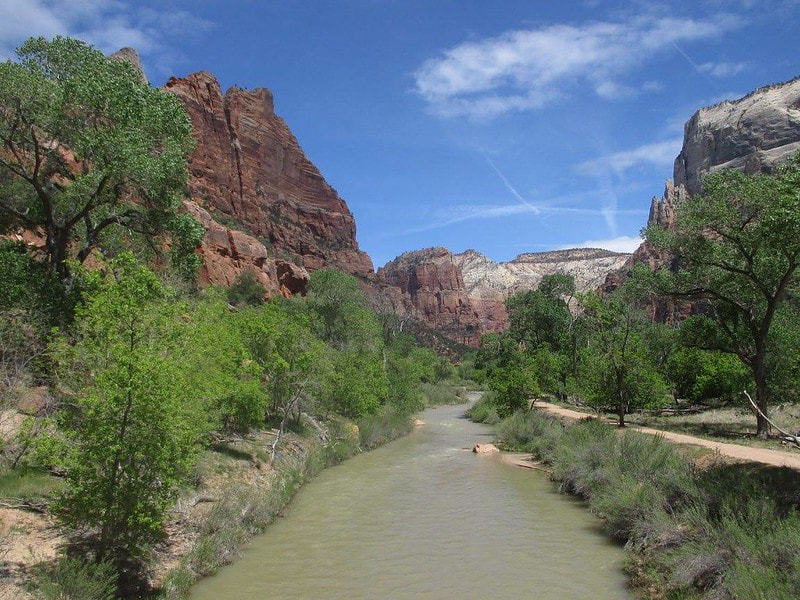 The middle Emerald Pool appears in this next photo, but the close quarters make it difficult to take a photo that encompasses the whole scene: 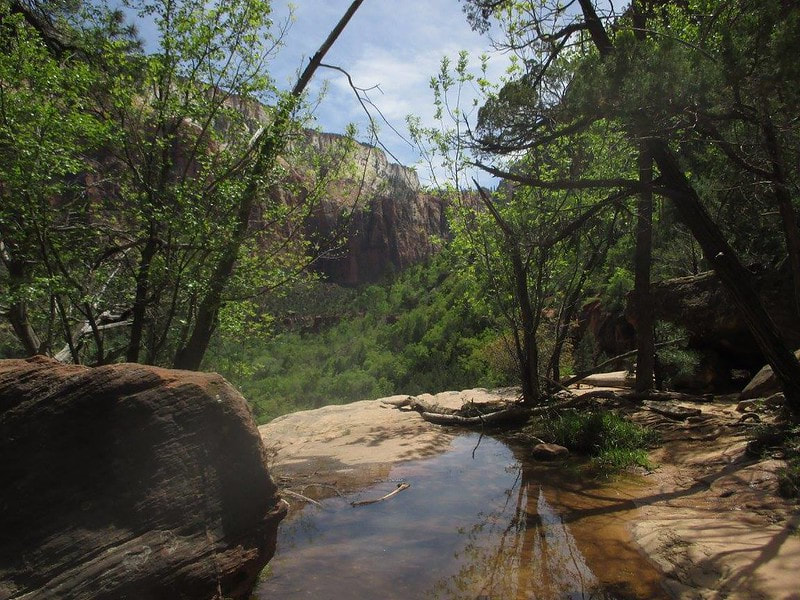 I like how the presence of water makes everything just a little lusher here: 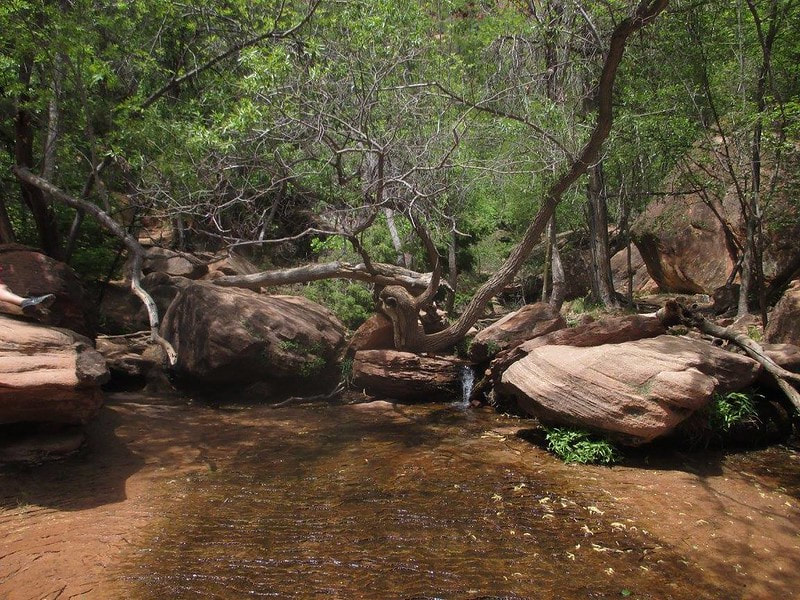 Reaching the Upper Emerald Pool, the penultimate goal of the trail, puts you in a semicircle of bluffs that hang somewhat overhead. 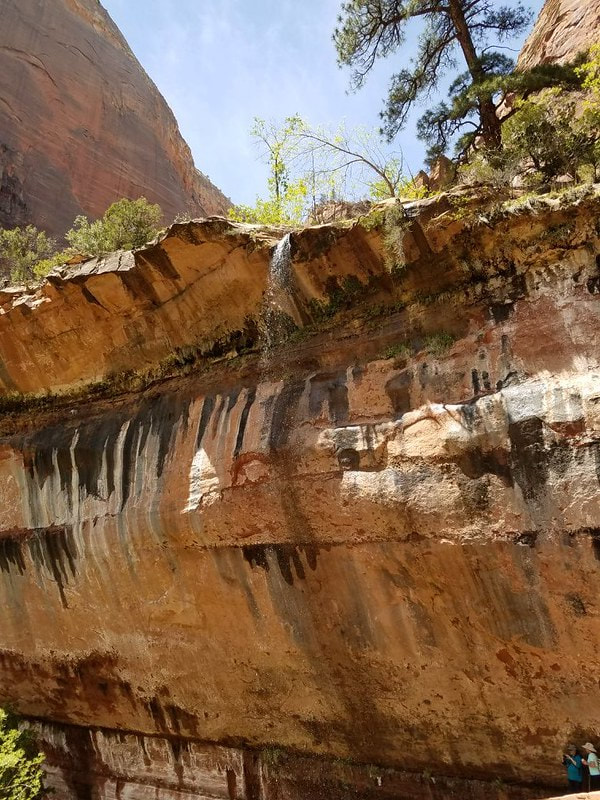 Look at the strange geometry of this cliff that looms overhead directly to the west: 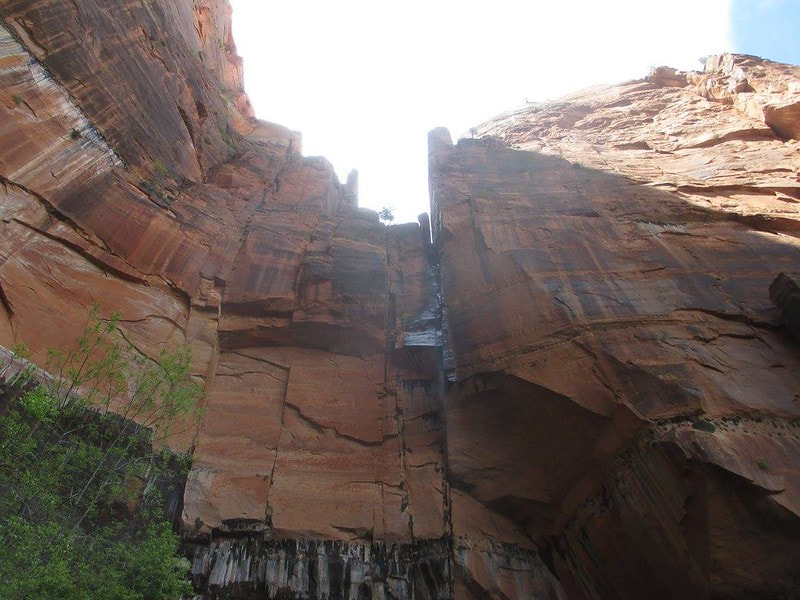 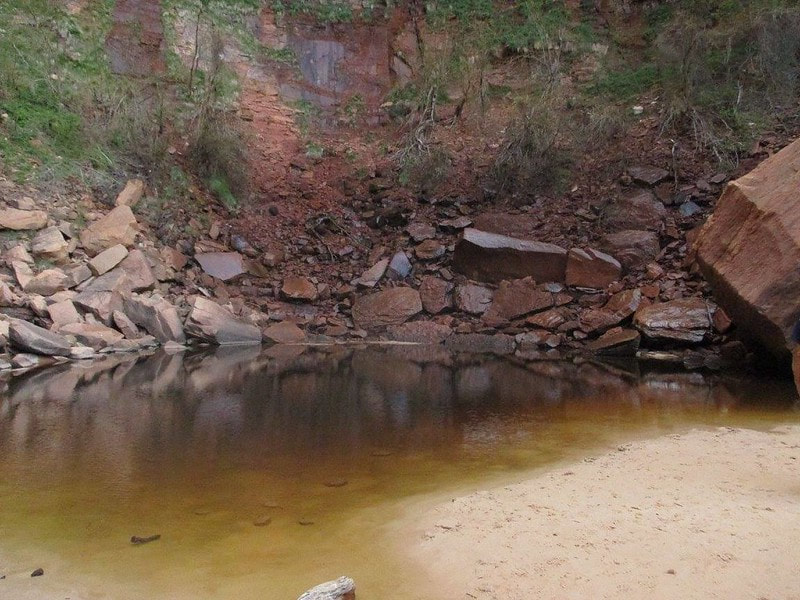 Look at this desert-dwelling lizard I found on the trail!  He was right by the footbridge over the river, so I spotted him 99% of the way through our hike: 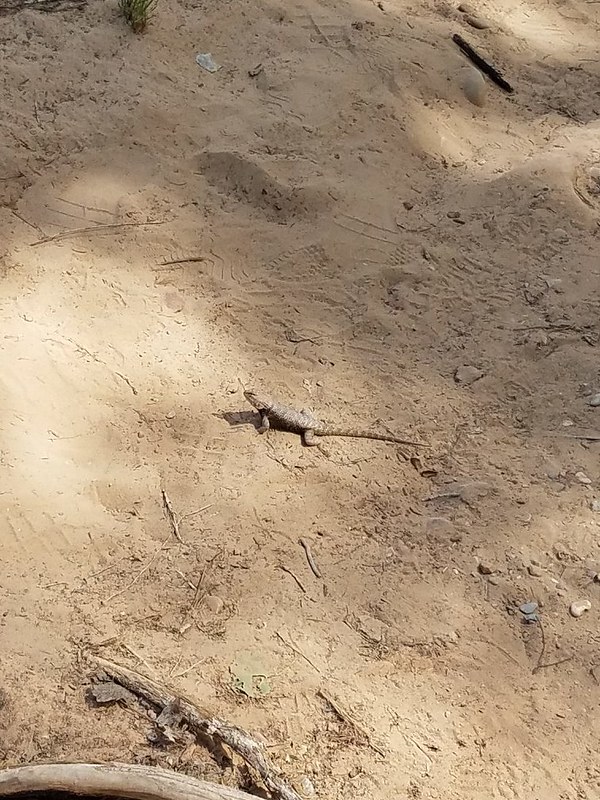 I believe this photo was taken as I was walking south along the canyon road (I figured that walking toward the car would get more done than just standing and waiting at a bus stop, even if I just ended up walking to the next bus stop to the south): 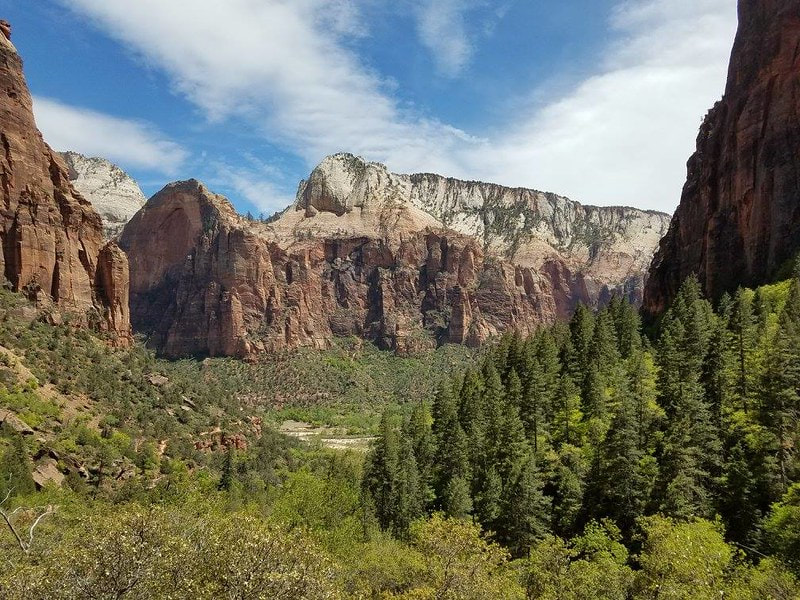 Part 2: Scenes From the Park Road 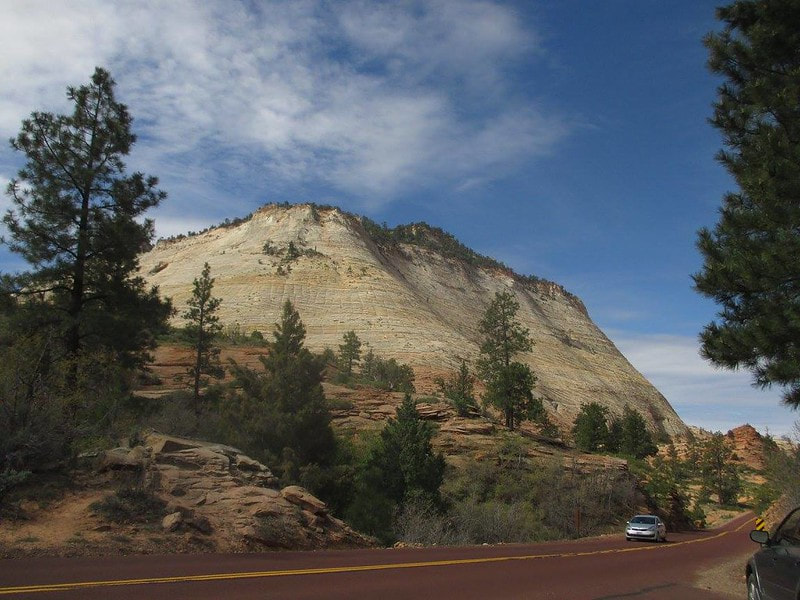 The road running north up the Virgin River to most of the premier hiking is restricted to shuttle buses only.  To access any of the attractions in the Virgin River canyon, you must park at the Visitor's Center at the south end of the road, where the road meets Route 9.  (Route 9 is the east-west route providing access to the park's east and west entrances.)  If the road was open to individual passenger cars, it would be a nightmare,  Leaving the park would be near impossible toward the end of the day, creating an effect that traps people in the canyon.  It's nice and clear most of the time, creating a mostly peaceful hiking experience along the road between trailheads. 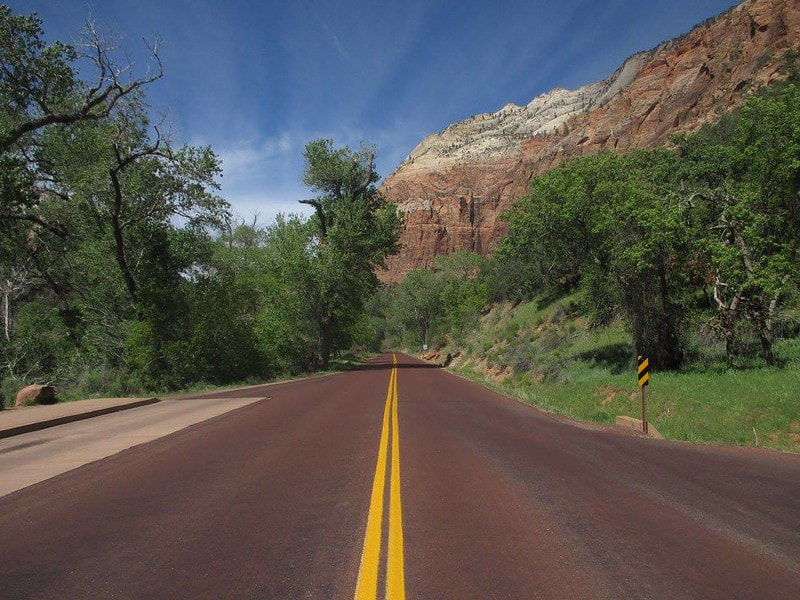 Entrance to one of the small tunnels in Zion National Park: 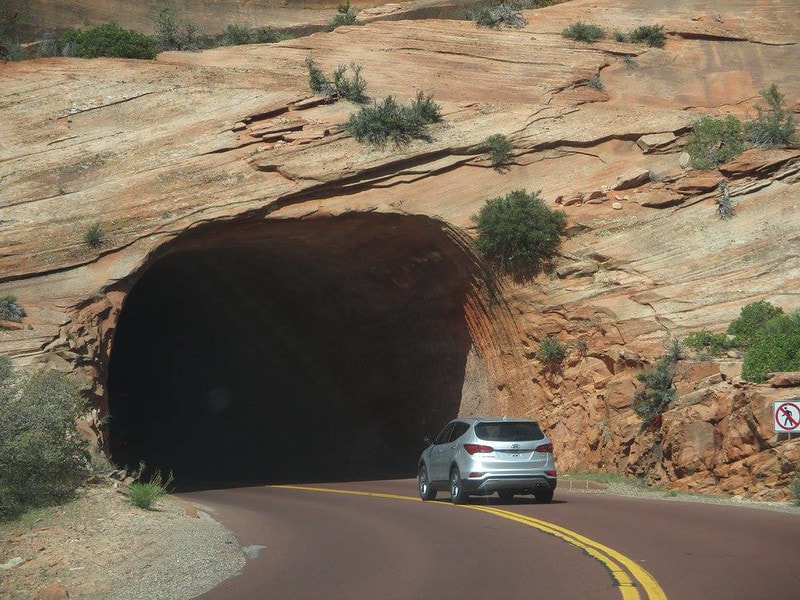 The eastern end of the big tunnel through Zion National Park, carrying Route 9.  This spot has the distinction of holding the only tunnel I've ever seen that has windows. This photo was taken standing on the start of the Canyon Overlook Trail, which is mentioned next: 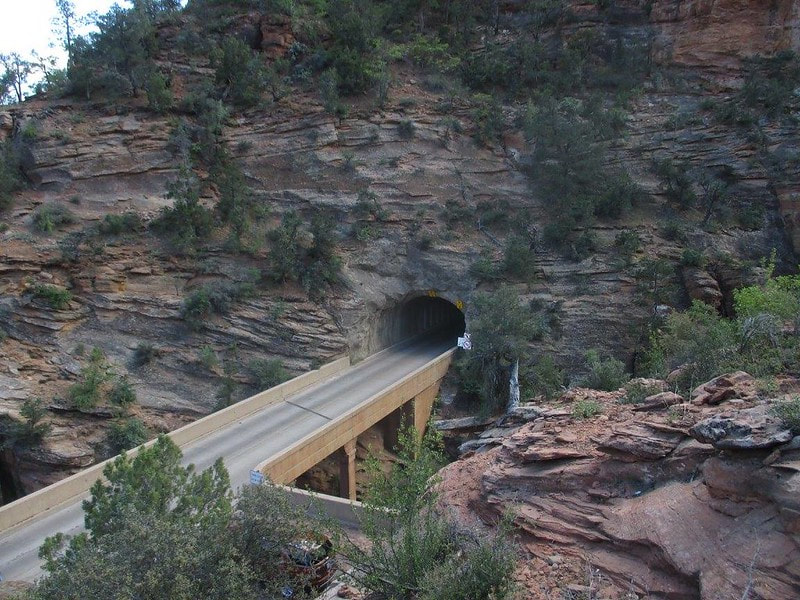 This trail starts at a trailhead right at the eastern portal to the big tunnel in Zion National Park.  While most trails are located in and around the Virgin River Canyon, this trail takes hikers to an overlook looking down on that canyon from a distance. Stay tuned for the final photo because it's awesome. 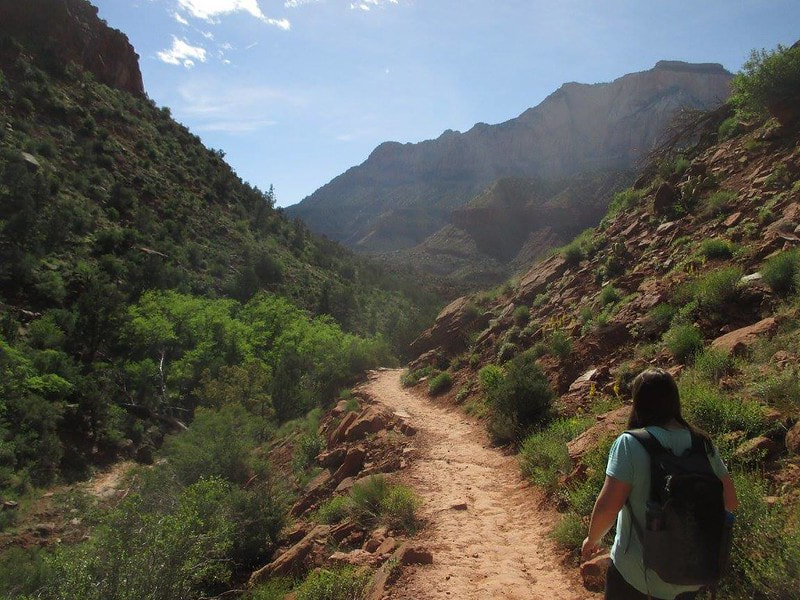 It almost looks like someone tried to start digging a tunnel through this mountain?  But I think this geometry on the rocks is just a natural phenomenon: 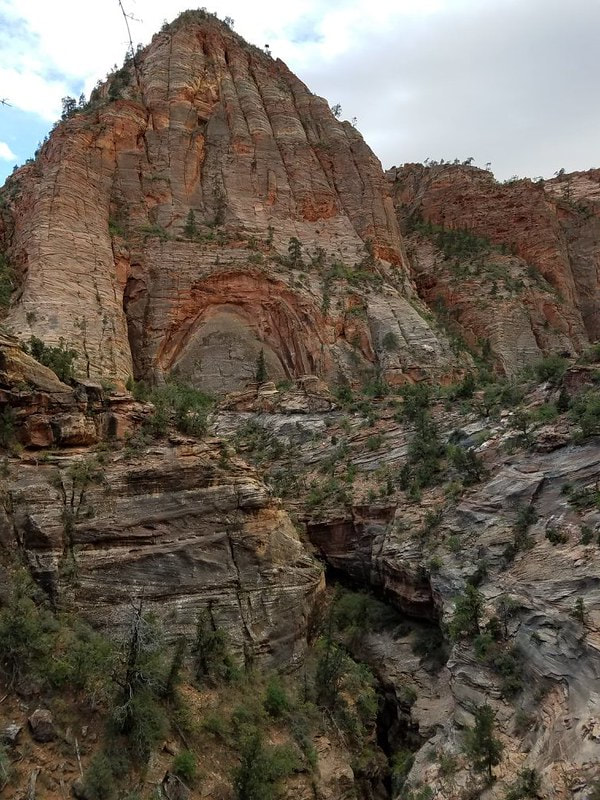 This little bridge structure was thrown into the trail to navigate around a bend on the underside of a cliff: 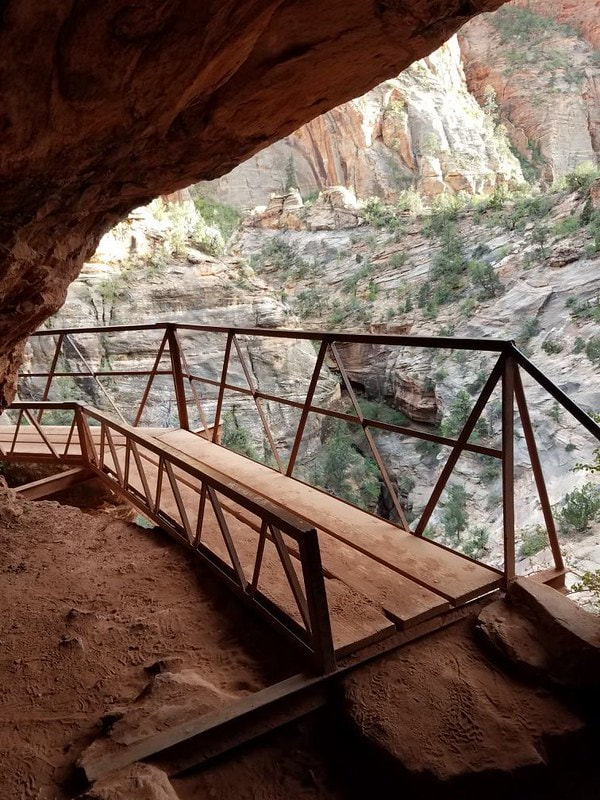 The Canyon Overlook Trail situates hikers on a trail that is right alongside a vertical drop into a canyon.  My wife was struggling a bit with her fear of heights.  The out-and-back trail puts you to the right of the canyon (and to the left of it on the return trip). 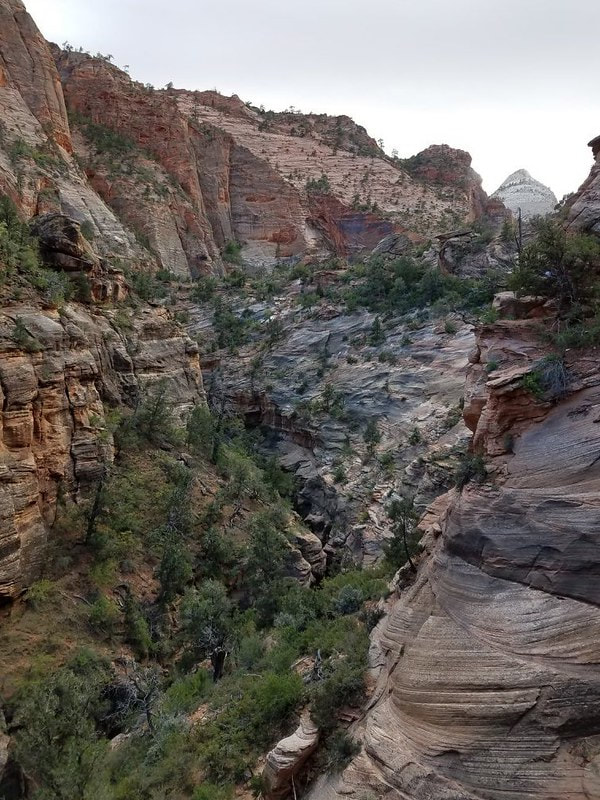 I have no idea why that light-grey ziggurat sticks out here, in a landscape of red rock. 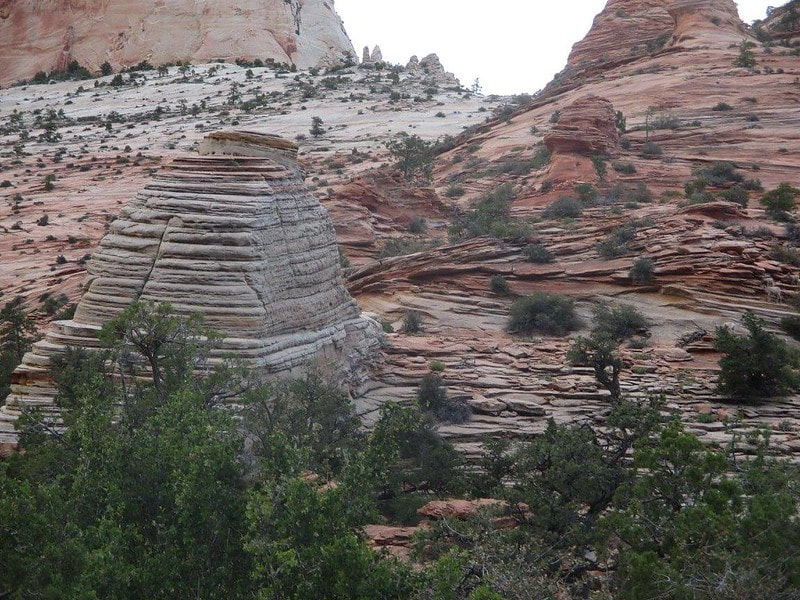 Look at this whole family of mountain goats grazing on the bluff above us.  The jagged, uneven landscape showed no obstacles to these nimble goats, who moved around effortlessly: 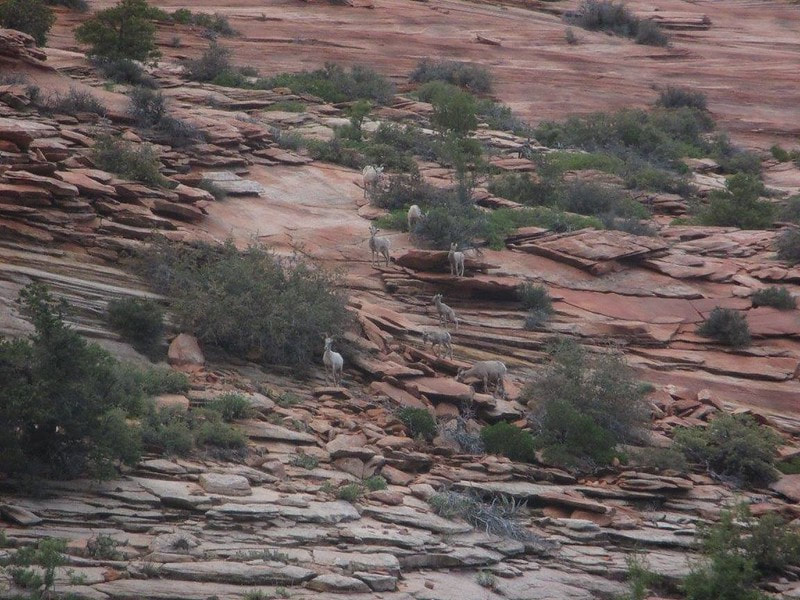 Here's the picturesque view of the canyon west of the trail.  This is what you see from the titular overlook itself.  That road is Route 9 winding its way downward from the western portal of the park's largest tunnel.  This picture was the phone background for a good chunk of time. 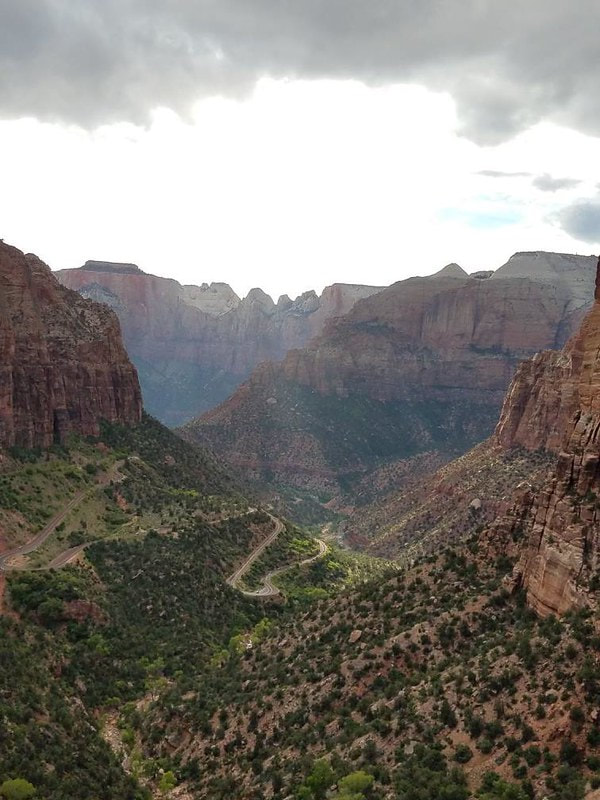