Interstate 90 in Illinois enters the state at the center of the northern border with Wisconsin, dropping south to Rockford, heading southeast through Chicago, and rounding the southern edge of Lake Michigan into Indiana.  Interstate 90 comes from south-central Wisconsin, entering Illinois along with Interstate 39 at Beloit, then splitting southeasterly from Interstate 39 toward Chicago.  Near O'Hare Airport, Interstate 90 turns from a tollway into the Kennedy Expressway, having no tolls, into downtown Chicago. Interstate 90 leaves downtown Chicago going south on the Dan Ryan Expressway, transferring to the tolled Chicago Skyway before crossing into Indiana.

Exits on Interstate 90 are listed in increasing order from west to east, as is customary for even-numbered Interstate highways.

Interstate 90 enters Illinois from Wisconsin at Beloit, and it's concurrent with Interstate 39's entry into the state... 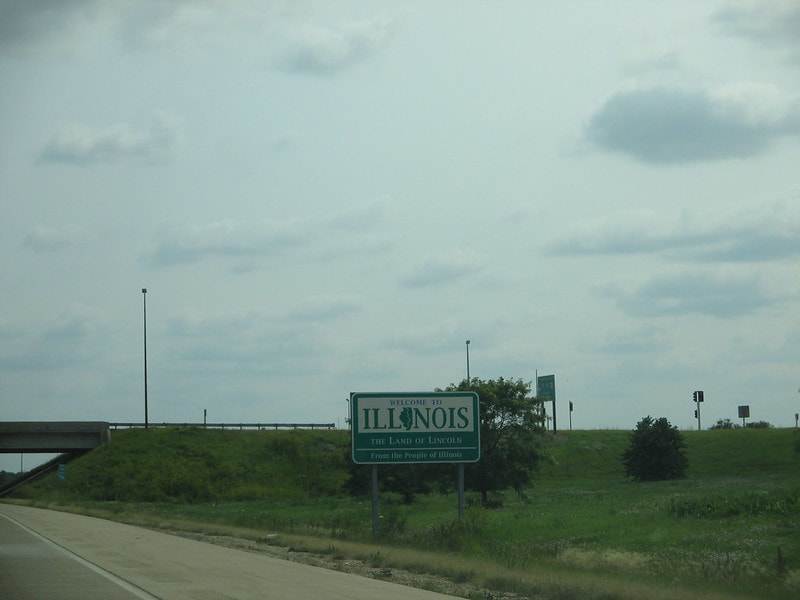 Exit 1 is just barely within the state of Illinois, and it connects to Illinois 75 and South Beloit, Illinois; US Route 51 comes from Illinois 75's western leg and joins the two Interstates southbound: 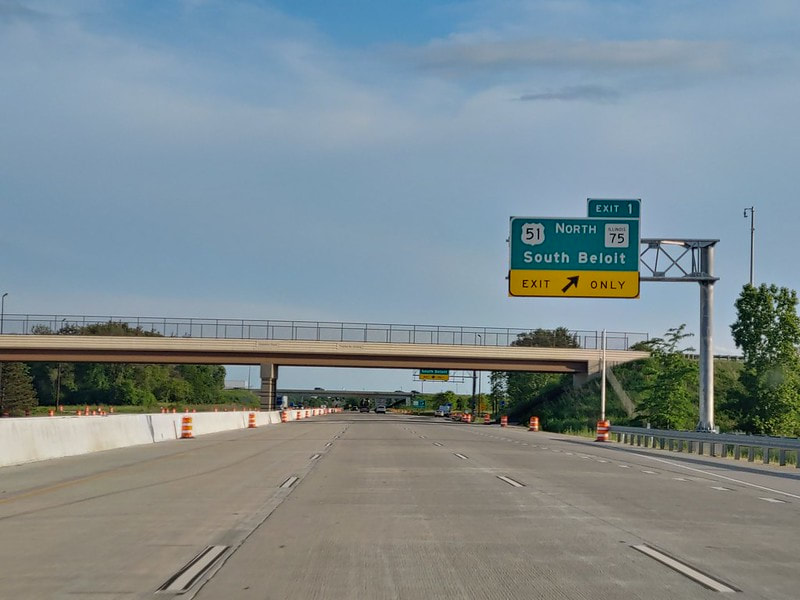 Exit 3 is for Rockton Road, which does indeed lead to Rockton: 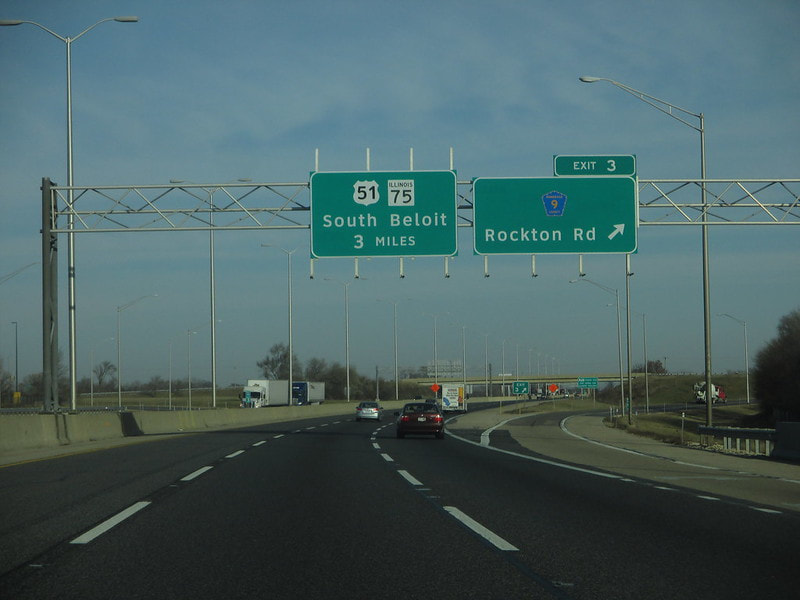 Exit 8 is a half-folded diamond interchange to Illinois 173, signed as a way to Machesney Park: 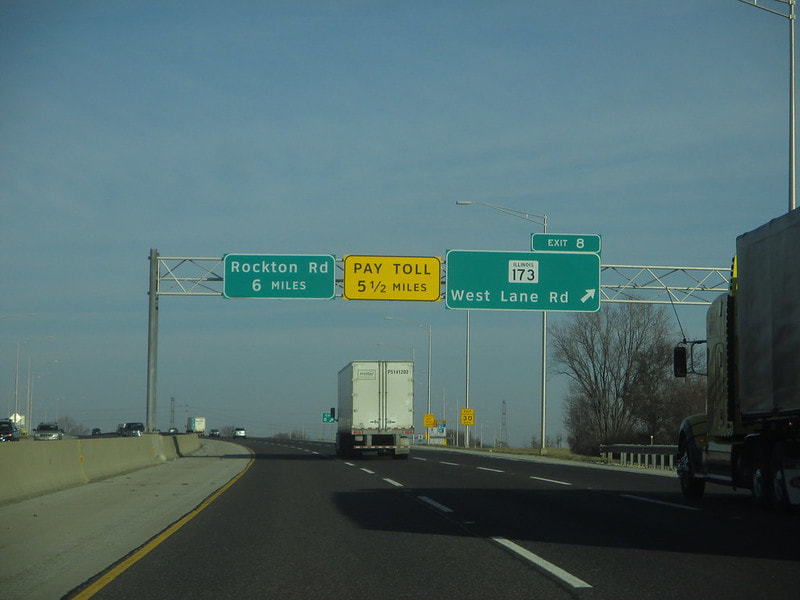 Exit 12 is for Riverside Boulevard in Rockford: 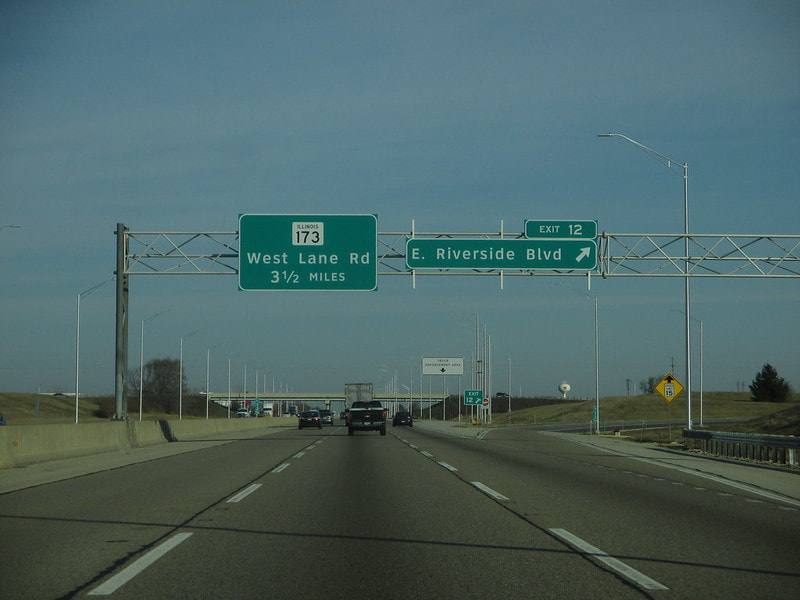 Exit 15 is a trumpet spur to Business US Route 20, known as State Street here in Rockford: 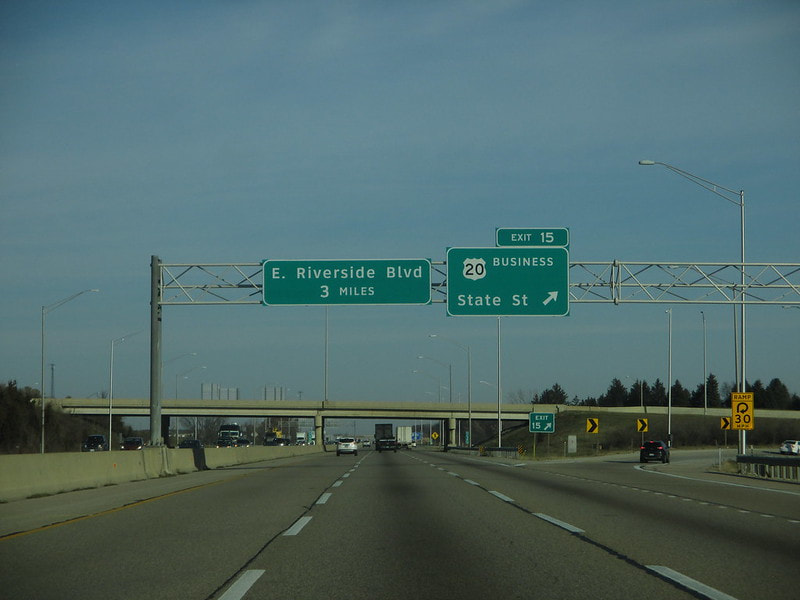 Exit 17 is the interchange where Interstate 39 and US Route 51 split away to continue south toward Bloomington, as Interstate 90 turns easterly: 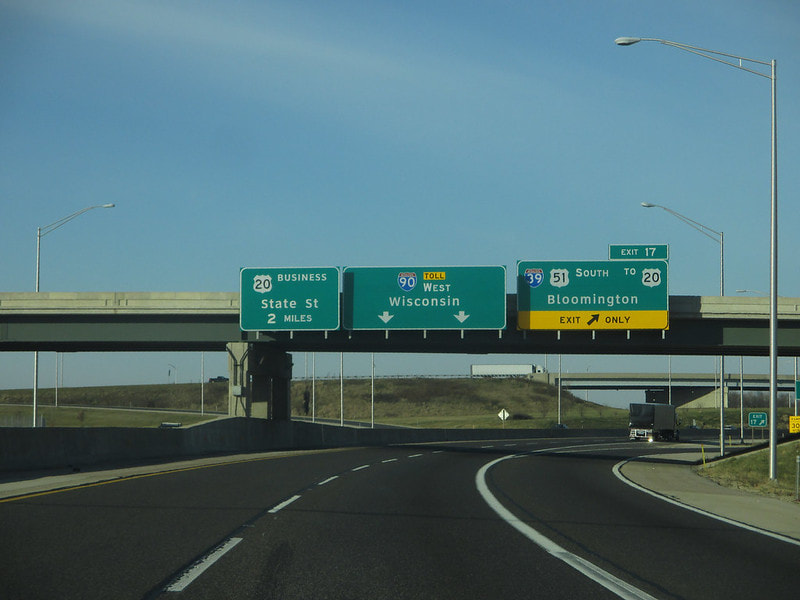 Exit 20 is a half-folded diamond interchange to Irene Road, where Rockford meets Belvidere: 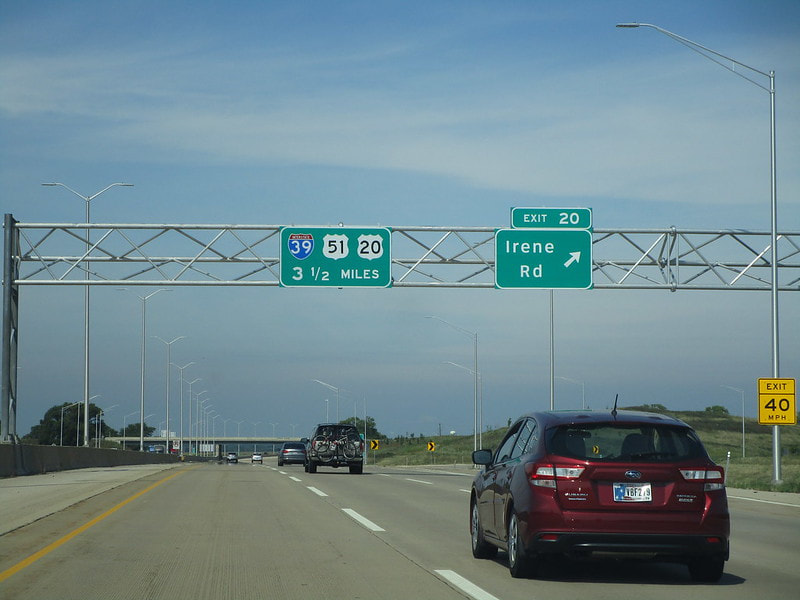 Exit 25 is a recently-reconfigured fountain interchange to Belvidere-Genoa Road, linking to both towns that appear in the name: 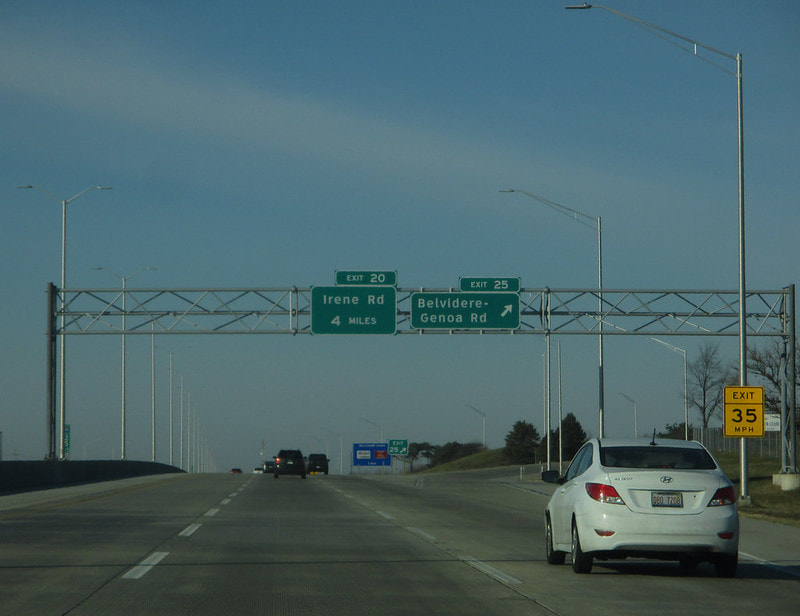 Exit 32 is a new fountain interchange to Illinois 23, which provides access to Marengo and Genoa...
Exit 42 is a trumpet spur to US Route 20, crossing at a different northwest-southeast angle, and US Route 20 reaches Hampshire and Marengo in this vicinity: 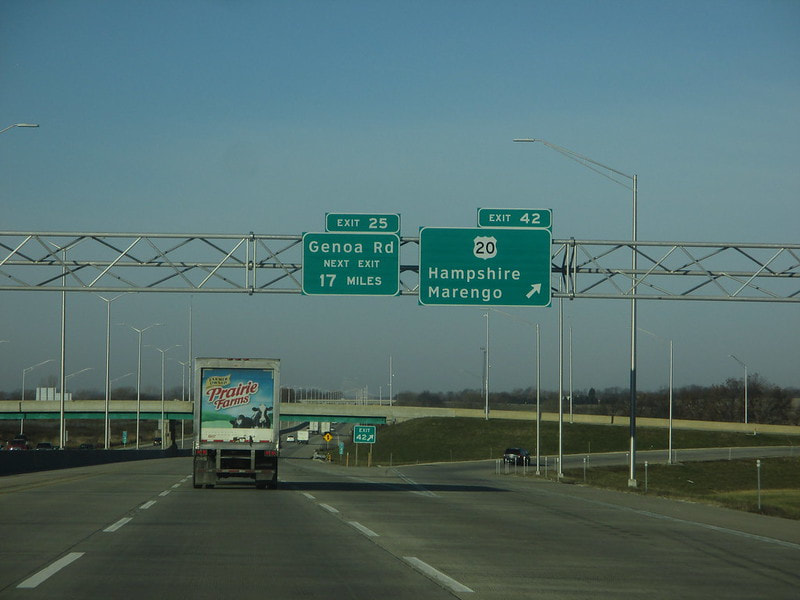 Exit 47 is for Illinois 47, which provides access to Elburn, Huntley and Woodstock: 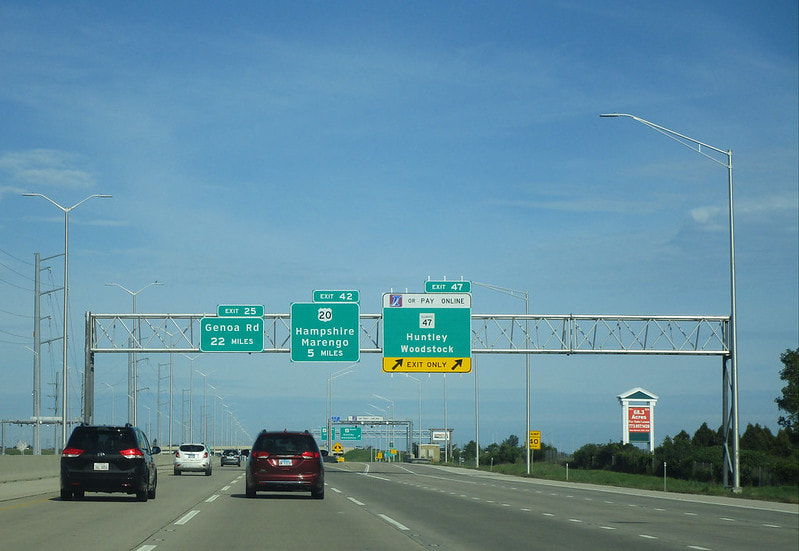 Exit 52 is for Randall Road: 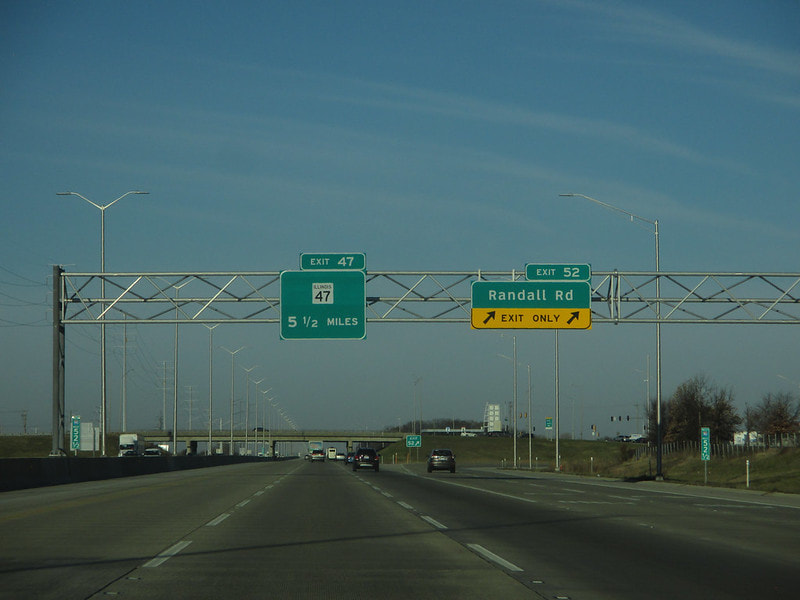 Exit 54A is the first ramp of the Illinois 31 cloverleaf in Elgin, leading to Illinois 31 south: 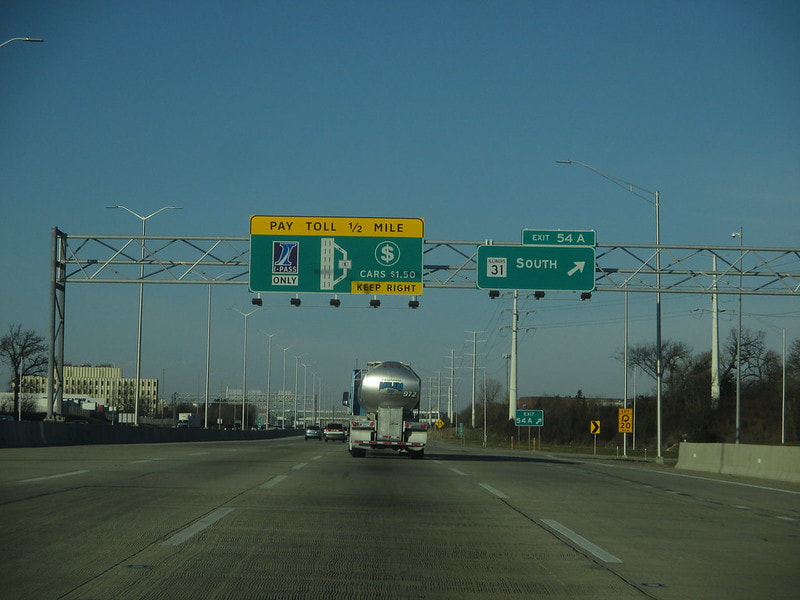 ​Exit 54B is the second ramp at the cloverleaf, reaching Illinois 31 north on the west side of the Fox River: 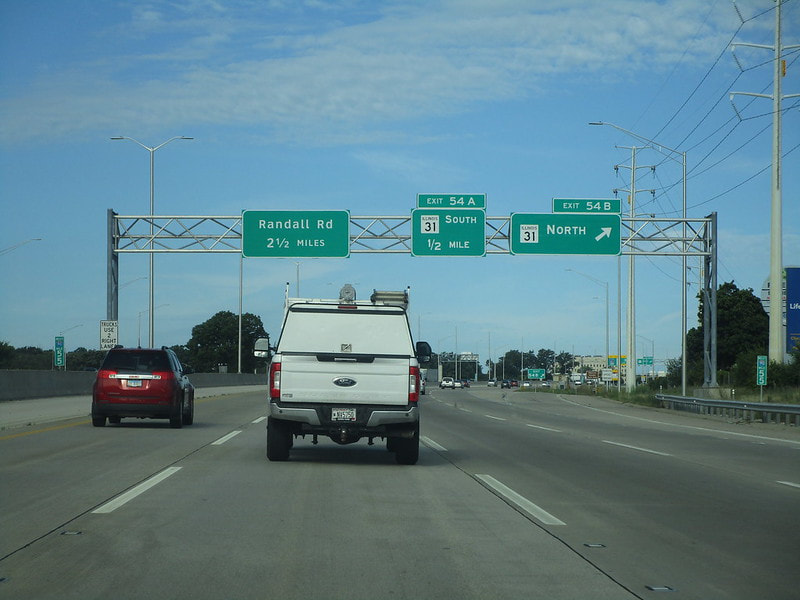 Exit 56 is a trumpet spur to Illinois 25 in Elgin, on the east bank of the Fox River: 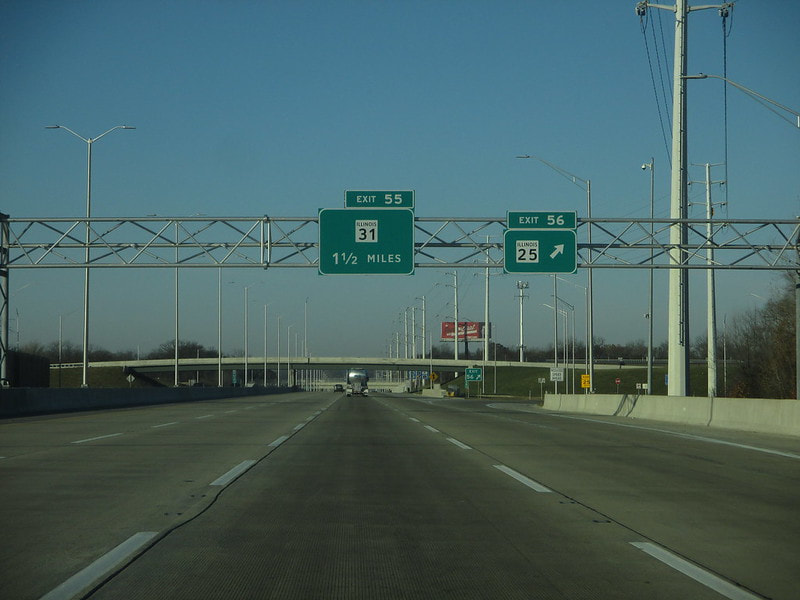 Exit 58 is to Beverly Road, with access restricted toward/from the east leg of Interstate 90: 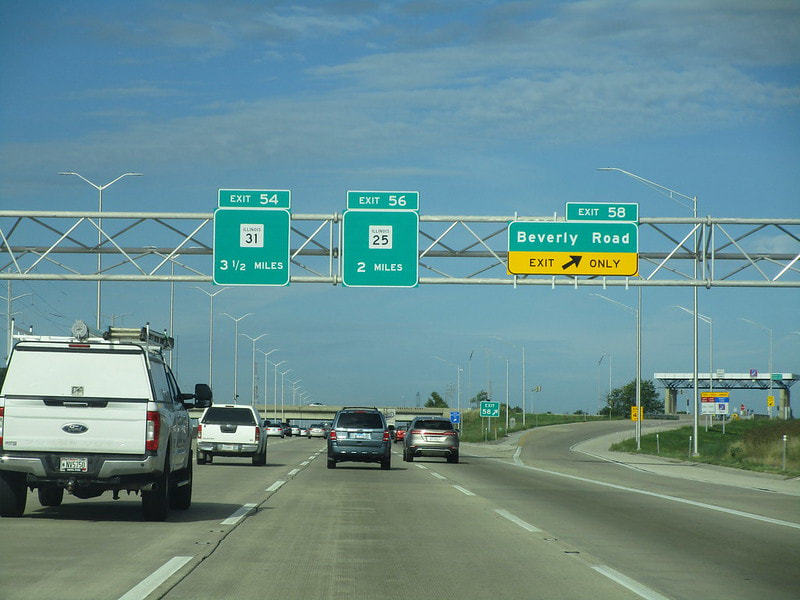 Exit 59 is a partial cloverleaf interchange to Illinois 59, in the vicinity of South Barrington and Hoffman Estates: 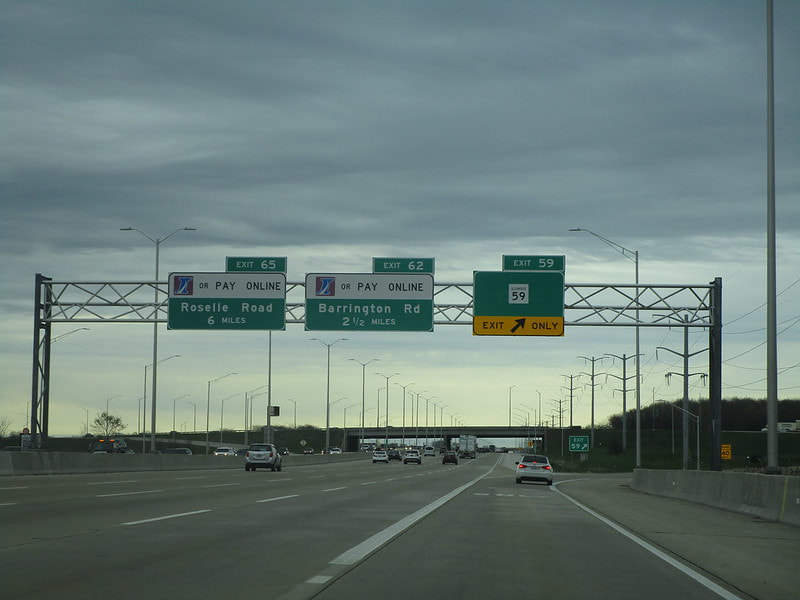 Exit 62 is a single-point interchange to Barrington Road: 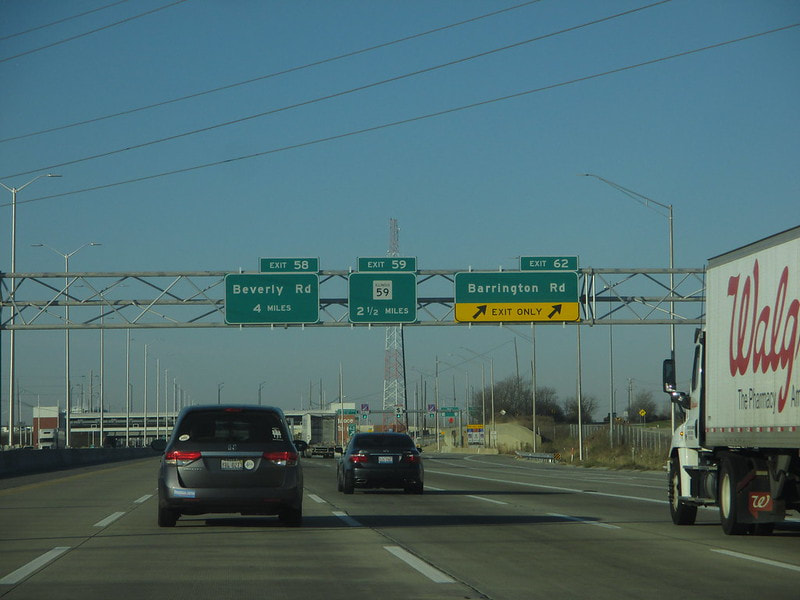 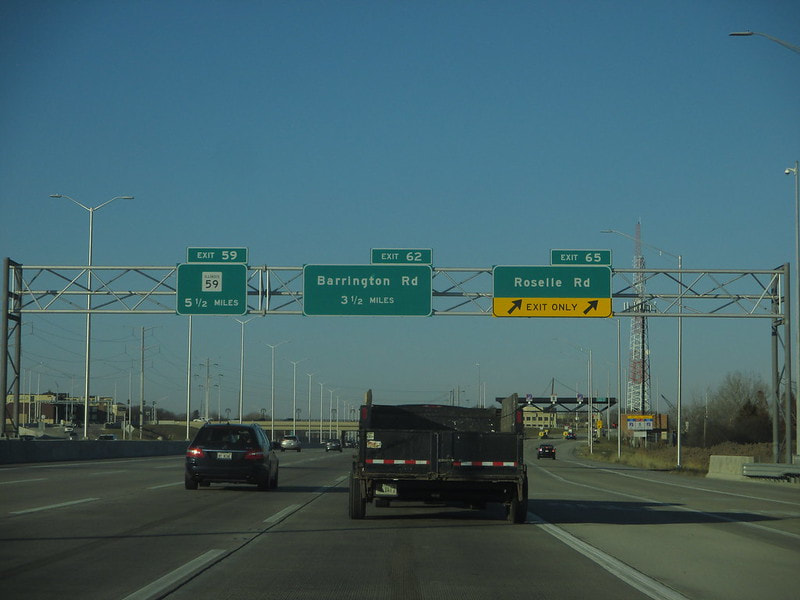 Exit 67 is a sort of partial bonus interchange to Meacham Road, to/from the westbound lanes of Interstate 90 only: 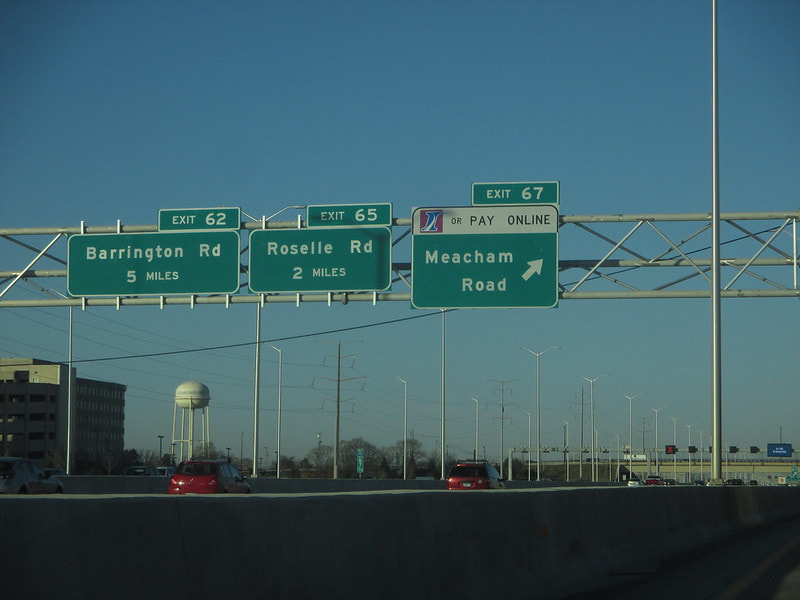