PAUL ACROSS AMERICA
US Route 76 is one of two US highways running from Chattanooga, Tennessee, east to Wrightsville Beach, North Carolina. (The other is US Route 74.) The western end in downtown Chattanooga is difficult to pinpoint because Tennessee is absolutely awful at signing routes. It seems to be at Broad Street and Main Street; Broad Street in this area carries US Routes 11, 41, 64, and 72.  This very intersection is the same exact point as US Route 72's eastern endpoint, prompting me to wonder why US Routes 76 and 72 don't have the same number.  From this point, US Route 76 heads southeast across the state border into extreme northern Georgia.  Near Georgia's northeastern corner, US Route 76 crosses into South Carolina, where the route heads southeast through Seneca, Clemson, and Anderson.  US Route 76 heads east to follow the Interstate 26 to Columbia, then US Route 378 to Sumter.  US Route 76 heads from there to Florence and then east to Wilmington, North Carolina.  US Route 76 joins US Route 74 on the same bridge to Wrightsville Beach, where both routes end but heading in different directions.  US Route 76 ends at a parking lot on the south end of Wrightsville Beach, whereas US Route 74 splits to head north to a separate endpoint. 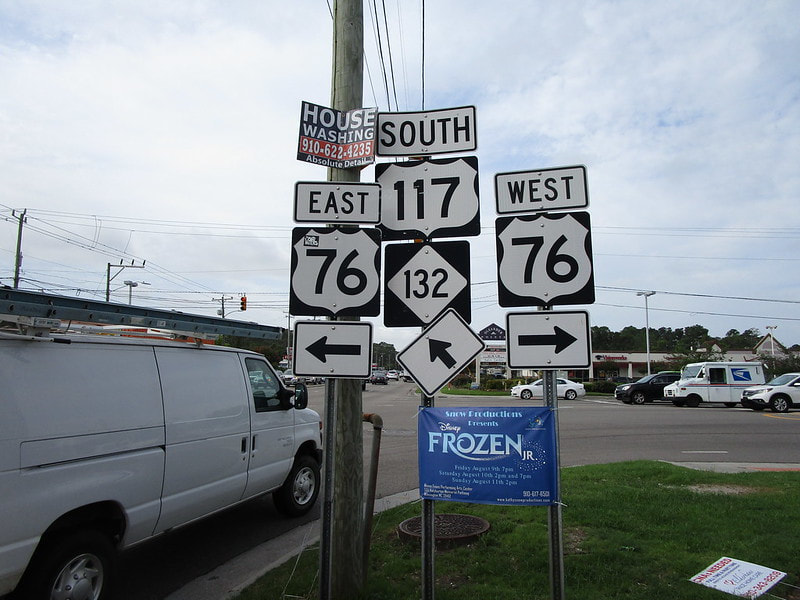 My photo for US Route 76 is at its junction with US Route 117 in Wilmington, North Carolina.  This photo faces north to southbound traffic on US Route 117. The photo was snapped in July 2019 during a trip to the beaches around Wilmington.
Back to the nationwide main page.
Back to the home page.