Arches National Park sits in the red rock of east-central Utah, home to curious arch structures created by inconsistent erosion. The park is a popular one, sitting outside the tourist town of Moab. However, despite its popularity, much of the crowding seems to focus on the sections of the park where arches are viewable from the parking lot.  Arches that require hiking are more seldom visited, allowing the opportunity to distance oneself from the crowds.  Oddly, the most famed arch in the park, called Delicate Arch, is the only one I did not visit or photograph.  The crowds all flock to Delicate Arch, as the view of that arch is an image branded into our minds by popular culture and half of the license plates in Utah.  Another odd thing to note is that another national park, Canyonlands National Park, is basically across the street from Arches National Park, and yet we didn't stop to visit Canyonlands.  We visited this park in late April 2017, on our first vacation together.

During our visit to Arches National Park, we saw the Window Arches, the Double Arch, and the three northern arches accessible only to those willing to hike a little bit.  The Window Arches and the Double Arch are more toward the southern part of the park, and they are easily accessible from parking lots.  The three northern arches provided a much-appreciated respite from the crowds; they are Sand Dune Arch, Broken Arch, and Tapestry Arch (my favorite).  The Delicate Arch viewpoints are along a side road stemming toward the east, and we avoided using that road strictly because of how overcrowded it was.

In this first photo, many arches have formed here, but only the one on the left is known as the Double Arch, for reasons that will become clearer below: 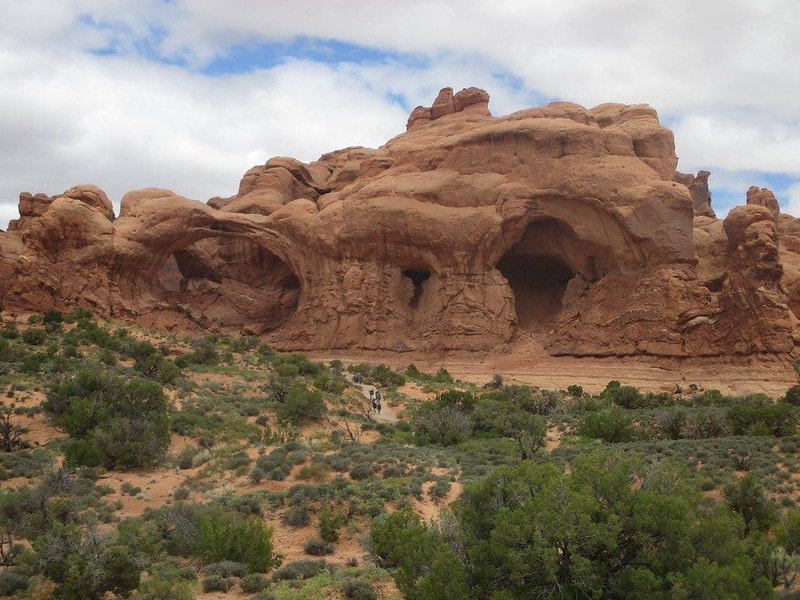 Here's a closer look at Double Arch, with the aperture positioned farther to the right.  Can you see why it's called Double Arch yet? 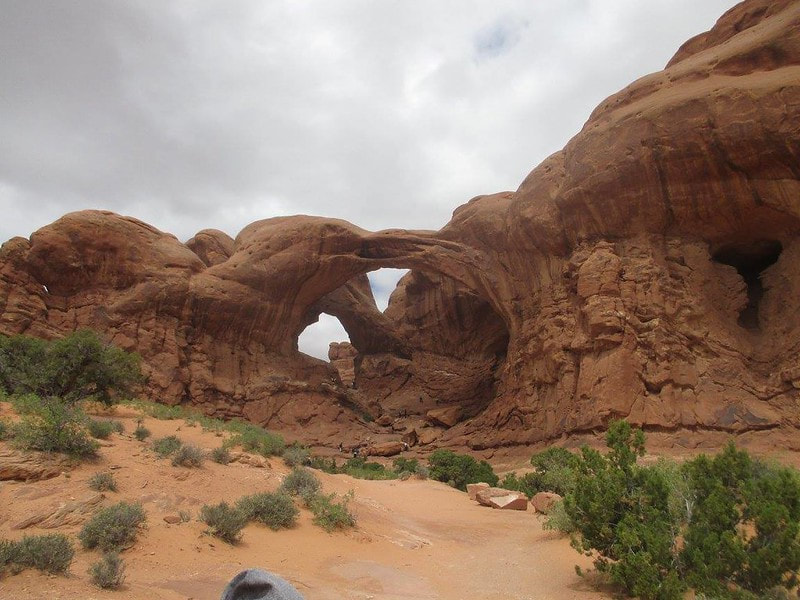 My closest view looking into the Double Arch: 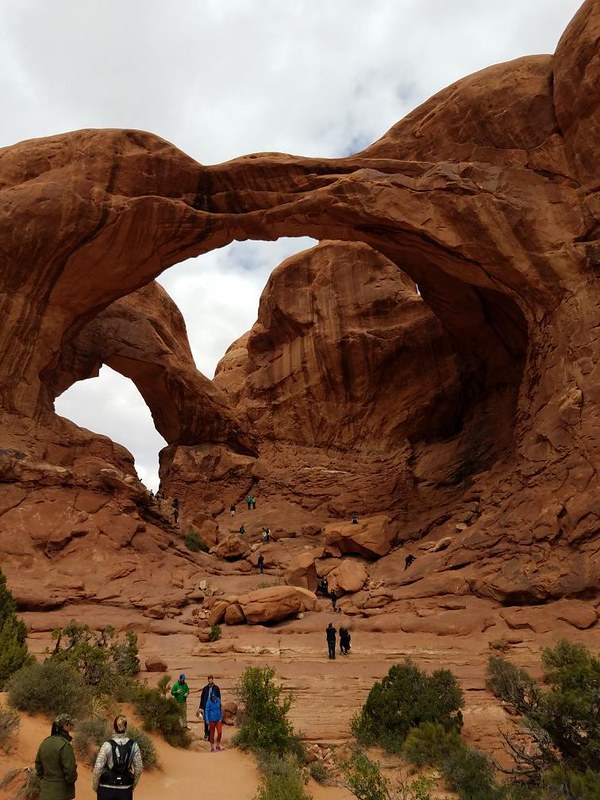 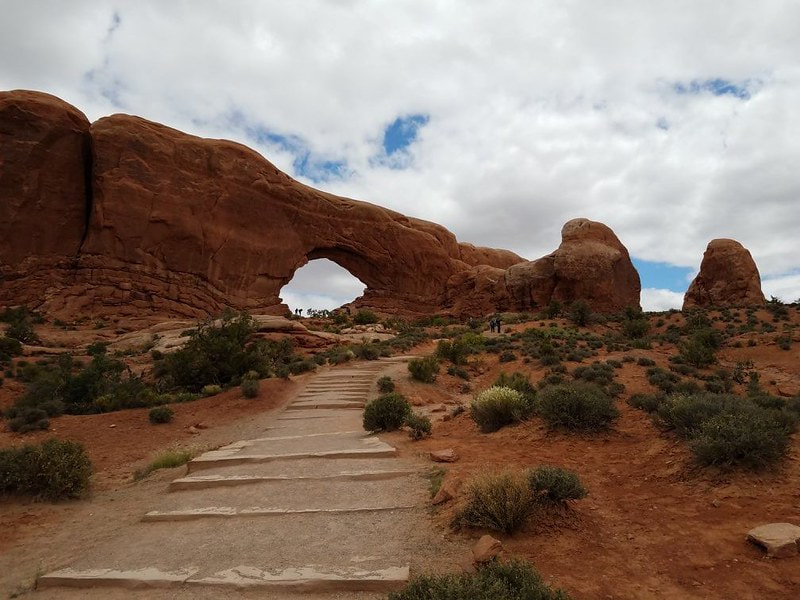 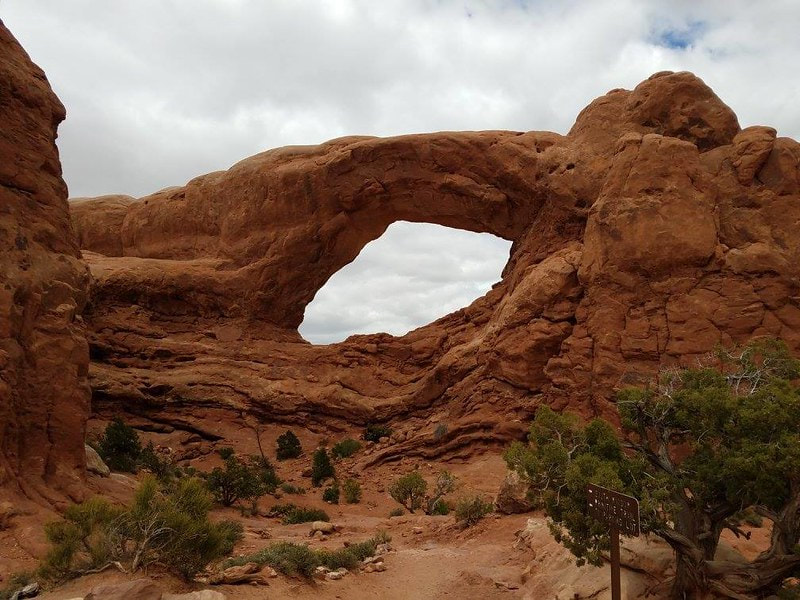 The Turret Arch, a narrower arch, is also easy to reach and view along the small loop trail used to reach the Window Arches: 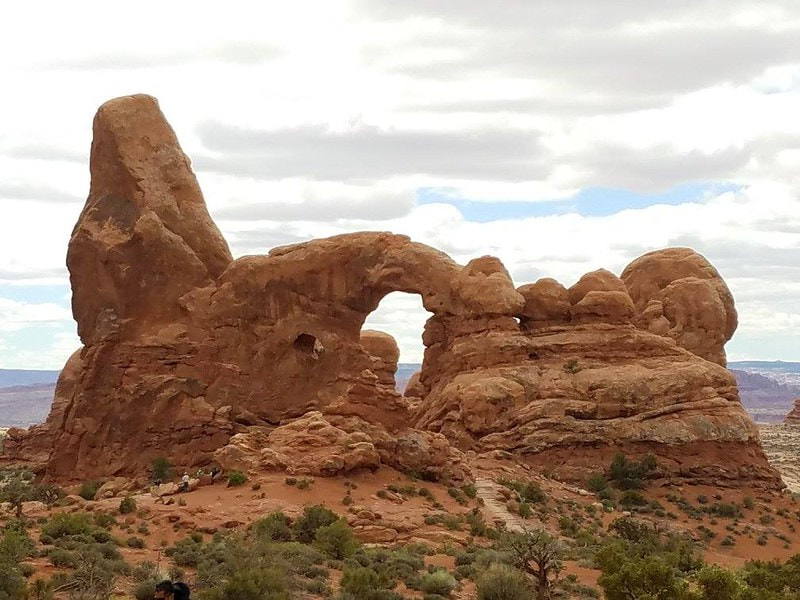 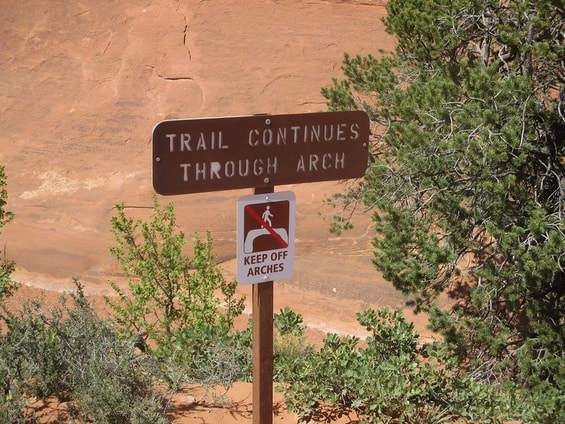 Anyway, the start of this trail to the three arches brought us to Sand Dune Arch first: 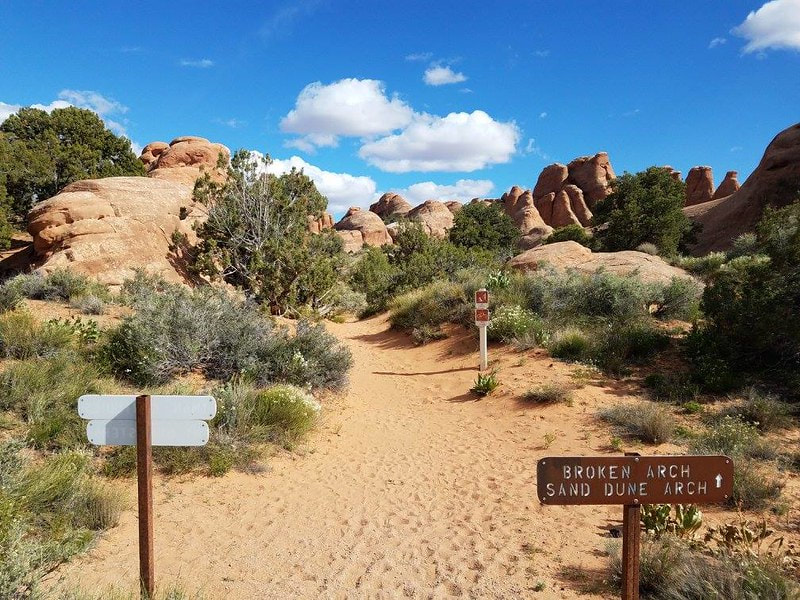 Getting to the Sand Dune Arch involves squeezing through a narrow passageway to a hidden chamber.  This photo was taken looking at the exit to that chamber: 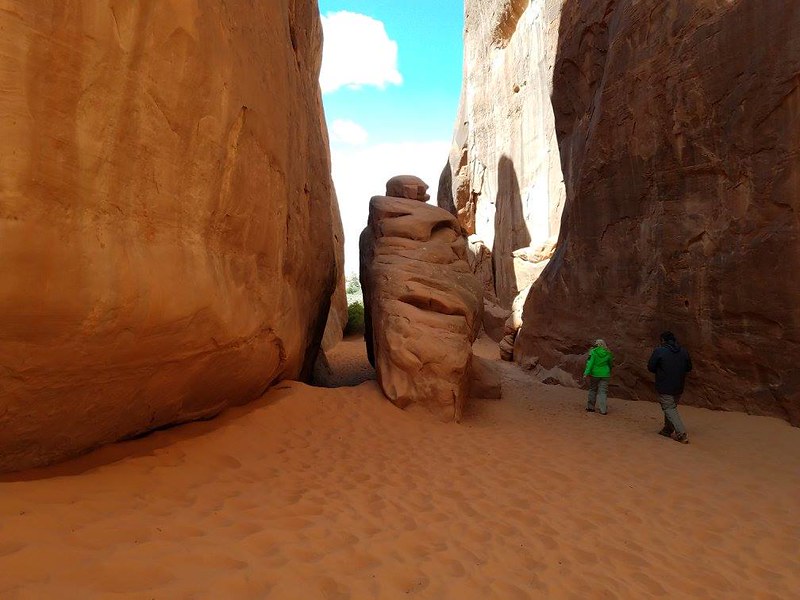 Sand Dune Arch isn't like the other arches: it's hidden behind rocks, sitting on a sand floor, and it isn't rounded.  Here, the underside was eroded away, forming an arch, but the rock outline isn't very traditional-looking. In fact, I would say that this arch looks pretty delicate itself: 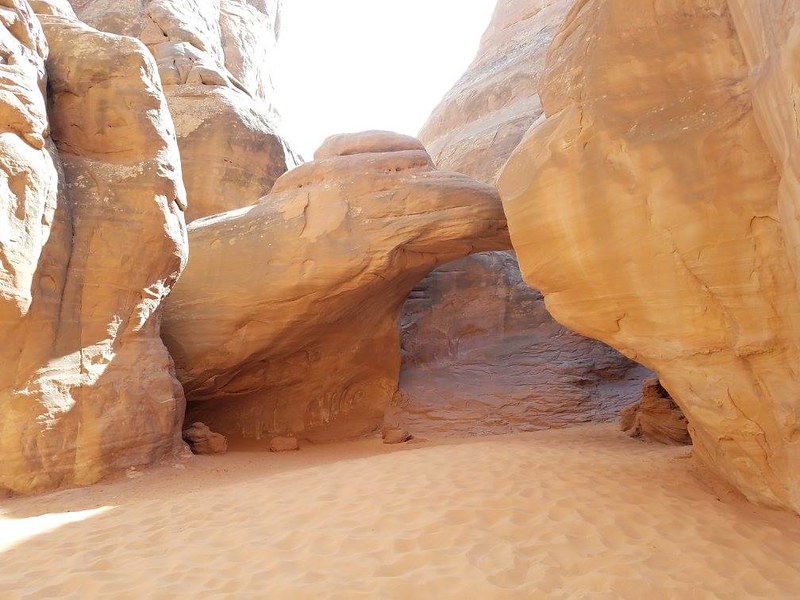 Here are some scenes from the trail as it proceeds onward from the Sand Dune Arch toward the north: 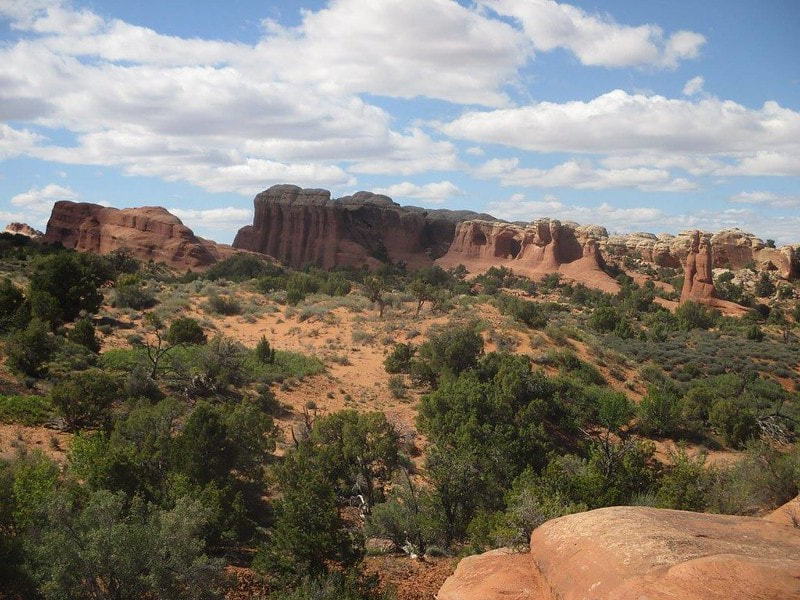 Note the cairn on the floor in this next photo.  A cairn is a stacked pile of rocks used to mark a trail.  Parts of the trail to Tapestry Arch traversed bedrock, which is hard to mark.  You can't exactly drive a stake or signpost into bedrock, so another method must be employed.  Hikers and officials alike will place cairns to identify the location of the trail. 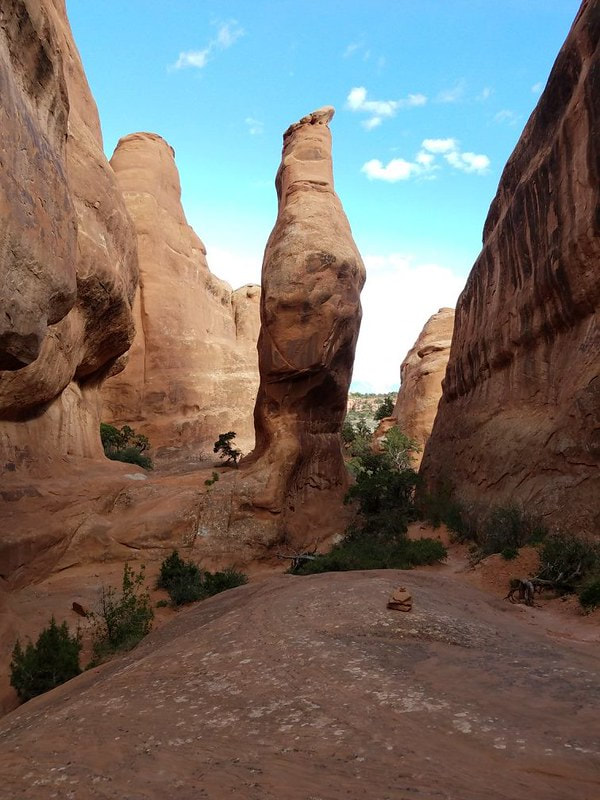 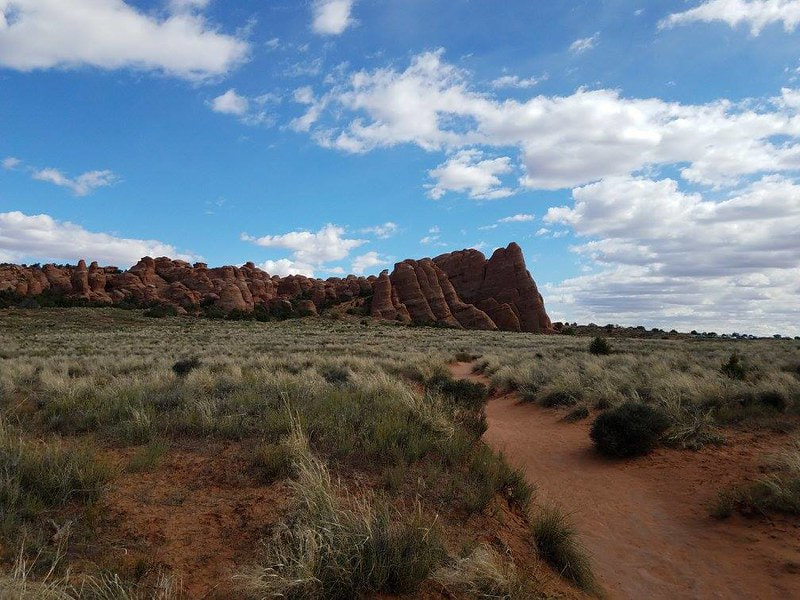 The next arch we saw is named Broken Arch.  When we encountered it, we were confused about where the trail continued. 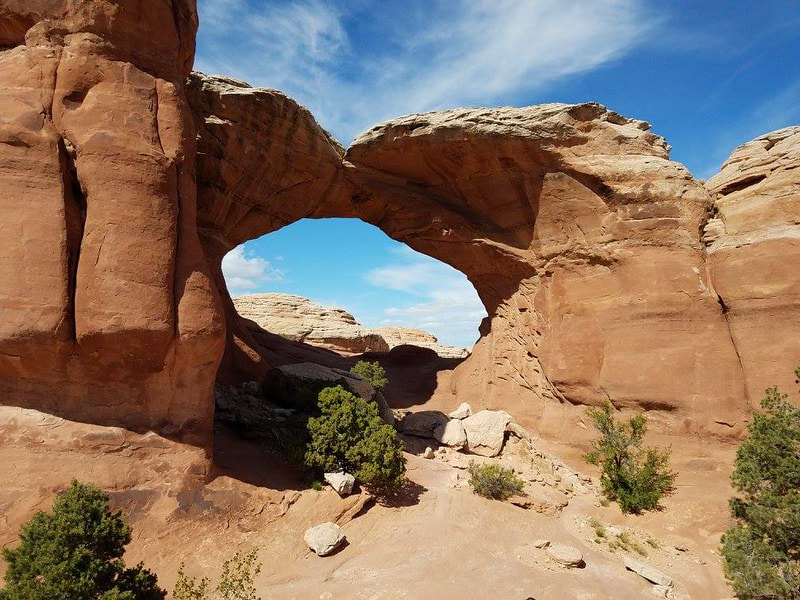 Some more views along the trail: 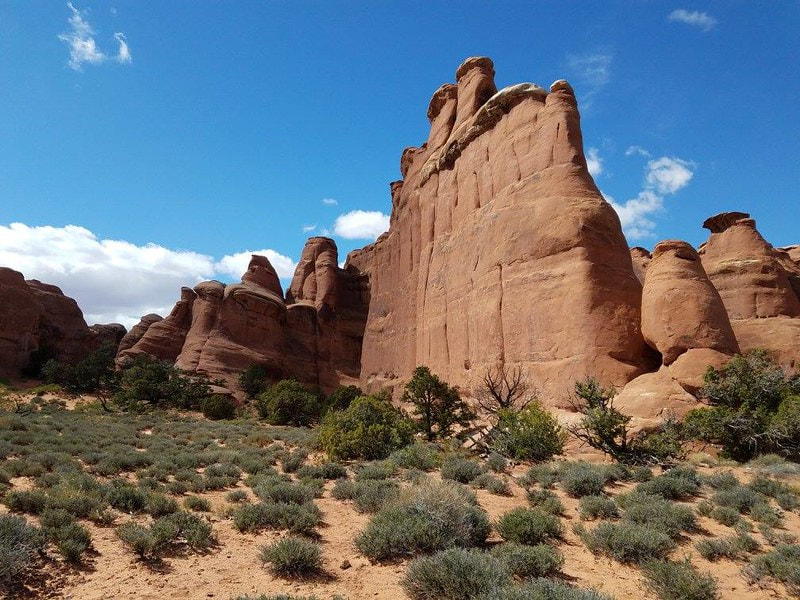 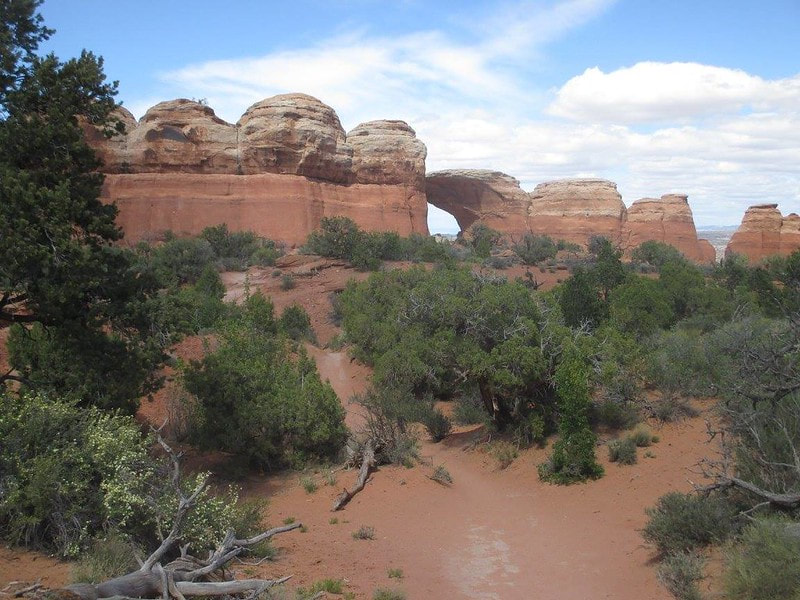 And now, Tapestry Arch, my favorite part of the park: 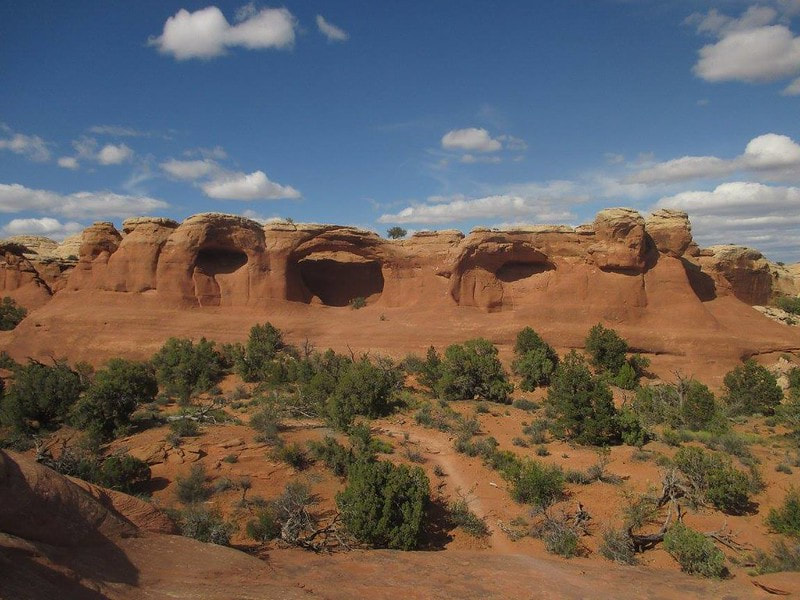 Tapestry Arch is my favorite part of the national park, partly because the arch's viewpoint was the only location in park where we encountered no other people near us or passing us.  It was the only time in this park full of natural wonders when we observed absolute peace and quiet.

I'll leave you with some thick hoodoos: 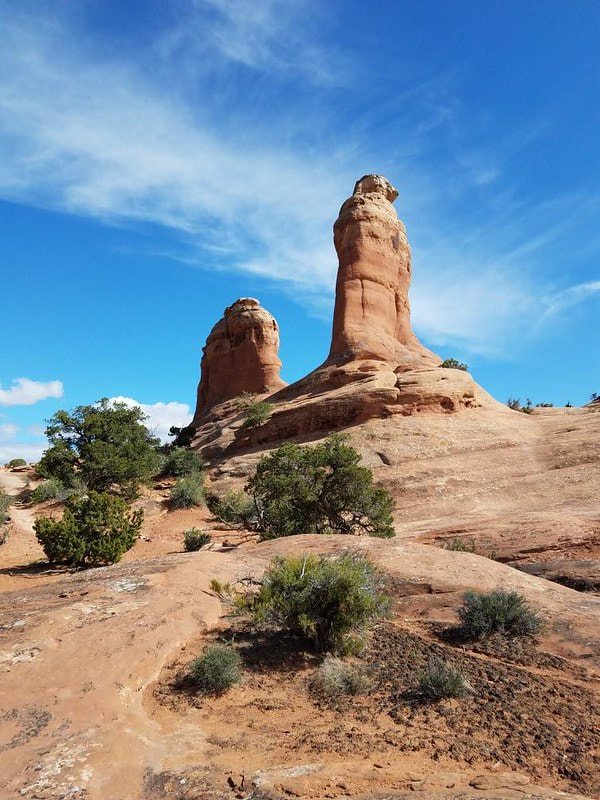