PAUL ACROSS AMERICA
US Route 43 runs north-south in Alabama and southern Tennessee, a bit west of the vertical centerlines one could draw to bisect both states.  Columbia, Tennessee, and Mobile, Alabama, serve as the endpoints that bookend this route.  While Interstate 65 heads south from central Tennessee to start bending westward at Montgomery, Alabama, US Route 43 juts westward before descending southerly through western Alabama to Mobile.  US Route 43 is the next north-south US highway west of the corridor carrying Interstate 65 and US Route 31.  It passes through Lawrenceburg, Tennessee, and places in Alabama such as Florence, Muscle Shoals, Tuscaloosa, and Demopolis.  The northern extent of US Route 43 joins US Route 412 on the bypass constructed around the north side of Columbia, Tennessee; US Route 43 uses that bypass to reach US Route 31, where it officially ends.  The southern end in Mobile occurs at a grade-separated intersection with a little access road; that intersection is with US Route 90 and the truck route alignment for US Route 98. 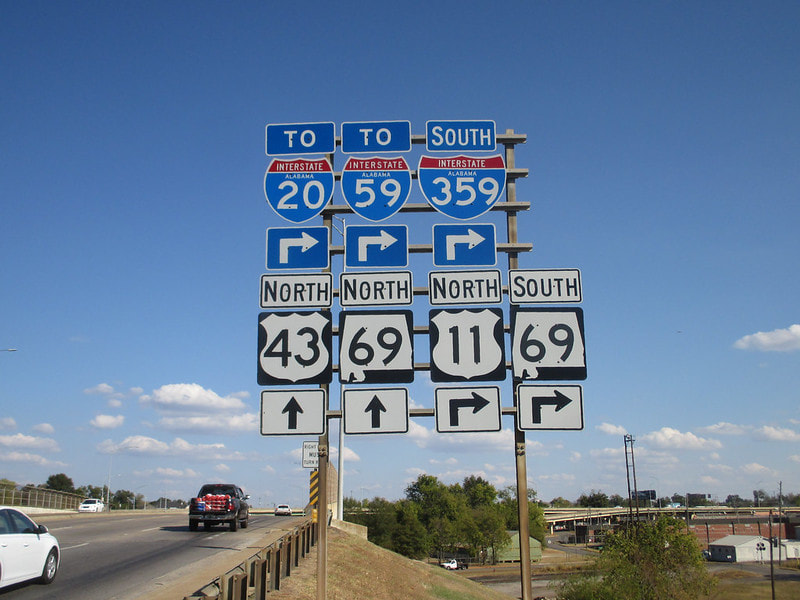 My photo for US Route 43 comes from Tuscaloosa, Alabama, and it's telling drivers about an upcoming interchange where a lot of things are going on.  US Routes 11 and 43 follow the road in the photo northeast into the background, where the two routes split apart. The interchange is home to the northern end of Interstate 359; US Route 11 turns southerly onto the Interstate, where at US Route 43 turns northerly onto a pair of one-way streets in downtown Tuscaloosa.  Alabama Route 69 runs north-south through the junction, from a concurrency with Interstate 359 to a concurrency with US Route 43.  This photo was taken in October 2016, as part of the second Gulf Coast excursion.  I drove US Route 43 in its entirety from north to south on this trip, making US Route 43 the only primary US highway (numbered 101 or fewer) that I've driven from end to end!
Back to the nationwide main page.
Back to the home page.