PAUL ACROSS AMERICA
Interstate 10 spans the southern United States, from southern California to Jacksonville, Florida, meaning that it meets locales on both coasts.  It's the fourth-longest Interstate Highway, and the shortest of the three that join locales on both coasts.  The western end is at Santa Monica, California, where it bends into a section of highway following the Pacific Coast, carrying the designation of California Route 1.  From there, it heads east through Los Angeles, the Inland Empire, and the Coachella Valley of Southern California.  Interstate 10 continues east through some of the hottest portions of the Mojave Desert, crossing the Colorado River into Arizona.  Interstate 10 passes through Phoenix and Tucson before crossing into southwestern New Mexico.  At Las Cruces, in south-central New Mexico, Interstate 10 turns south to El Paso, Texas.  Interstate 10 stretches a record-setting 880 miles in Texas, spanning the width of the state to serve San Antonio, Houston, and other areas.  Just past Beaumont, Texas, Interstate 10 crosses into Louisiana, pressing onward through Lake Charles and Lafayette to Baton Rouge. At Baton Rouge, Interstate 10's eastward journey bows southward to access New Orleans before bowing back north to Slidell, Louisiana; Interstate 12 serves as a more direct alternate between Baton Rouge and Slidell.  Slidell is right where Interstate 10 turns easterly over the state line into Mississippi.  The little southern stubs of Mississippi and Alabama along the Gulf Coast are both traversed by Interstate 10 from west to east.  Interstate 10 passes by Gulfport, Pascagoula, and Mobile, to enter its final state of Florida.  Interstate 10 runs east-west down the whole Florida panhandle, past Pensacola and Tallahassee.  Its final stretch continues across the rest of northern Florida so it can end at Interstate 95 in Jacksonville, Florida. 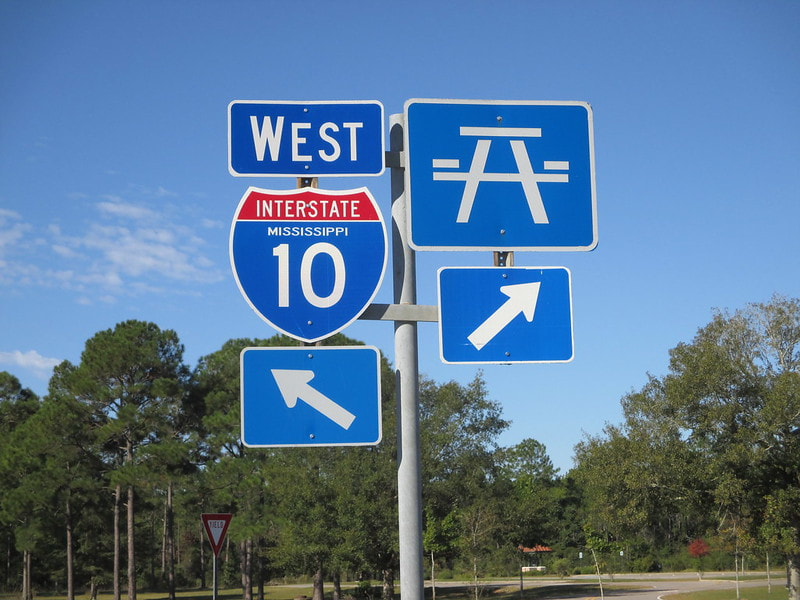 My photo of Interstate 10 comes from the border of Alabama and Mississippi.  The westbound lanes are given a rest area and welcome center to welcome travelers into Mississippi.  The route marker depicted shows people stopping at the Mississippi welcome center how to get back to the Interstate.  This photo was taken in October 2014 along the first Gulf Coast trip.  Welcome centers and rest areas can be a great, safe place to photograph an Interstate sign, so long as the relevant state's DOT posts them along their parking lots (my I-40 and I-84 photos came from rest areas, too).
Back to the nationwide main page.
Back to the home page.