PAUL ACROSS AMERICA
Interstate 15 runs from the Canadian border to San Diego, by way of western Montana, eastern Idaho, Salt Lake City, Las Vegas, and the San Bernardino area.  The Canadian border crossing where Interstate 15 starts is just north of Shelby, Montana, and the road continuing north into Canada connects to the main north-south transportation corridor through Alberta.  Interstate 15 heads south on a lightly traveled freeway serving Great Falls, Helena, and Butte in Montana.  The freeway stays on the empty side heading into eastern Idaho, where it serves Idaho Falls and Pocatello before entering Utah.  In northern Utah, Interstate 15 becomes a heavily-traveled freeway, serving as the most dominant highway corridor in the populated and rather linear north-south valley home to Ogden, Salt Lake City, and Provo.  Beyond Provo, Interstate 15 is back in rural areas, bending south-southwesterly to St. George, in the southwest corner of Utah.  Beyond there, Interstate 15 barely clips the northwest corner of Arizona before heading southwesterly into the metropolis anchored by Las Vegas, Nevada.  The last state Interstate 15 enters is California, and it makes its entrance cutting southwesterly through the Mojave Desert.  It crosses a mountain pass to land in the San Bernardino Valley.  It flanks around the west sides of San Bernardino and Riverside, but the alternate route of Interstate 215 connects to those cities' centers.  Finally, Interstate 15 continues south to end at Interstate 8 in San Diego; the freeway continues past Interstate 8 into downtown San Diego, though, as California State Route 15.  (I'm not sure why the Interstate 15 designation doesn't continue south to downtown at Interstate 5.) All of Interstate 15 follows the corridor originally defined by US Route 91; only a small fragment of US Route 91 remains, since Interstate 15 has largely replaced it. 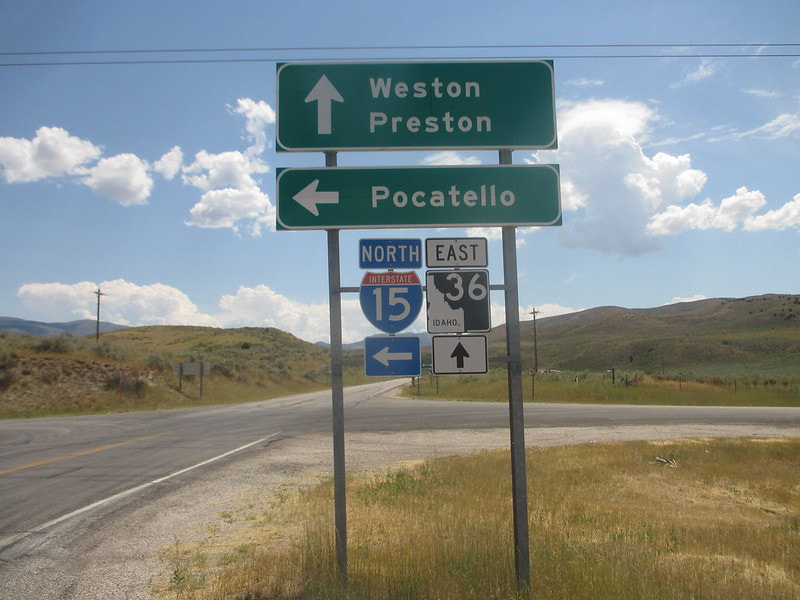 My photo of Interstate 15 comes from the western end of Idaho Route 36, which runs east to Weston and Preston in Idaho. The interchange home to this photo is nearer to Malad City, Idaho. The depicted set of signage faces west, pointing out the start of Idaho Route 36 and the northbound entrance to Interstate 15. This photo was taken on a side trip from a long weekend in the Salt Lake City area in July, 2019 (the side trip was to find the house where they filmed "Napoleon Dynamite").
Back to the nationwide main page.
Back to the home page.