PAUL ACROSS AMERICA
US Route 83 is a north-south route from Canada to Mexico, cutting down rural areas of the Great Plains states. The northern end is the Canadian border near Westhope, North Dakota.  From there, US Route 83 cuts right down the middle of the Dakotas, passing through the state capitals of both North and South Dakota.  The route leans more toward the western sides of Nebraska and Kansas, then crossing the Oklahoma and Texas panhandles.  US Route 83 passes through Abilene, Texas, in the middle of that state, before ending as it merges with Interstate 35 just outside of Laredo, Texas.  (So technically, US Route 83 doesn't quite make it to the Mexican border itself.)  US Route 83 is remarkable for being so long, yet avoiding highly-populated areas like the plague.  The only cities traversed by US Route 83 that might be remotely recognizable are Minot, North Dakota; Bismarck, North Dakota; Pierre, South Dakota; North Platte, Nebraska; Abilene, Texas; and Laredo, Texas. 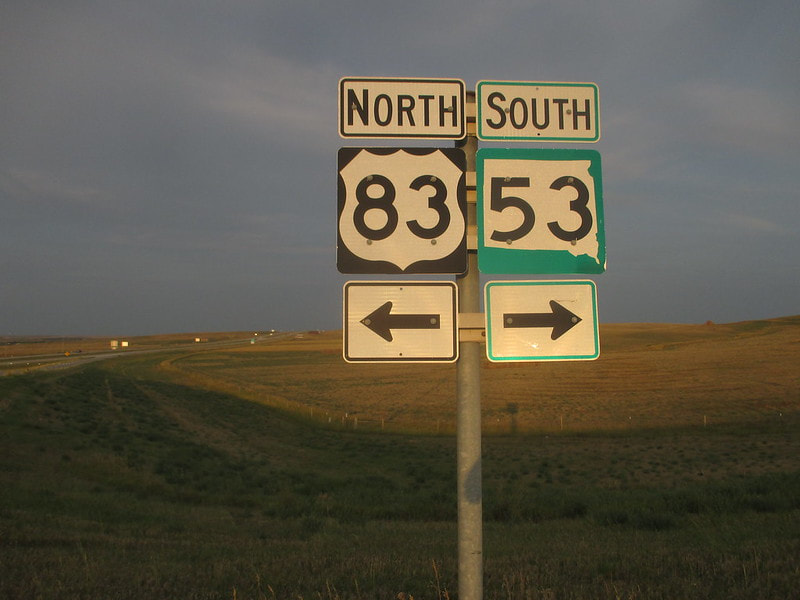 My photo for US Route 83 was taken at an interchange with Interstate 90 near Vivian, South Dakota. This sign assembly faces west toward traffic that just used the eastbound offramp from Interstate 90, at an interchange marking the eastern extent of US Route 83's concurrency with the Interstate.  It also marks the northern end of South Dakota State Highway 53.  The signage appears golden because the photo was snapped during the golden hour; the assembly faced the setting sun on a long day of driving that started in Cody, Wyoming.  I was on my way home from the Yellowstone National Park area, toward the tail end of my drive to and from the Pacific Ocean in August 2018.
Back to the nationwide main page.
Back to the home page.