PAUL ACROSS AMERICA
US Route 322 runs east-southeasterly from Cleveland, Ohio, to southern New Jersey; most of its time is spent in Pennsylvania.  The western end is at US Route 6 in downtown Cleveland.  From there, US Route 322 heads straight east to the Pennsylvania border, where it immediately becomes curvier.  It slides southeast to Clarion, Pennsylvania, where it hugs the Interstate 80 corridor until it has a chance to break away southeasterly to State College.  After State College, US Route 322 joins US Route 22, its parent route, until the Harrisburg area.  US Route 322 heads east from Harrisburg through Hershey. Just southwest of Philadelphia, near the Delaware state line, is a town called Chester, where US Route 322 crosses the Delaware River into southern New Jersey.  From that bridge, US Route 322 makes a beeline for Atlantic City, but it gets absorbed by US Route 40 before it can make it all the way there.  This is the eastern end of US Route 322, and it's a strange at-grade trumpet interchange without a grade crossing (something only New Jersey would conceive of doing). 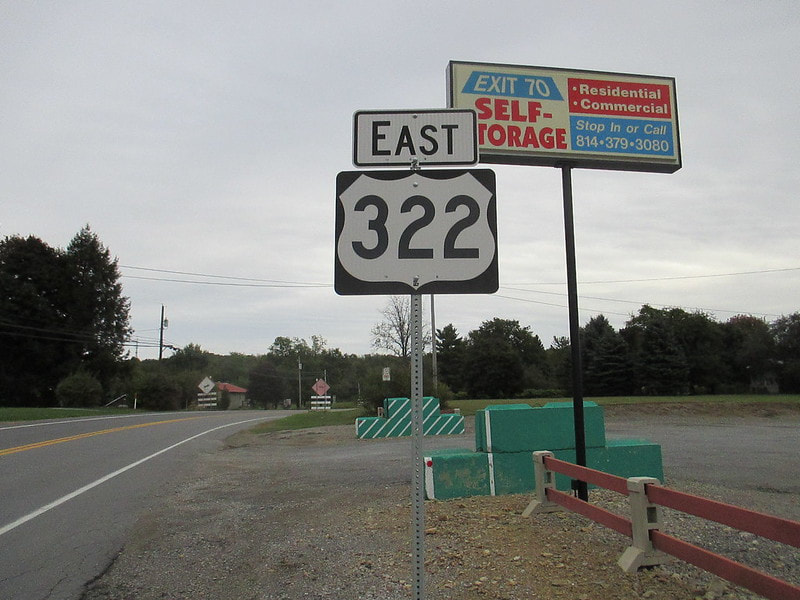 My photo of US Route 322 is the eastbound trailblazer coming off the interchange with Interstate 80, just east of Clarion, Pennsylvania.  This entry in my shield image collection shows the alternative font for the numerals used by the state of Pennsylvania. I took this photo on an early part of the road trip to the Northeastern United States, in October 2015.
Back to the nationwide main page.
Back to the home page.