PAUL ACROSS AMERICA
Interstate 49 has stretched from Shreveport, Louisiana to Lafayette, Louisiana for decades, but a massive northern extension to Kansas City is in development.  All portions of Interstate 49, whether fully formed or merely proposed, follow the US Route 71 corridor. As of writing this in March 2022, Interstate 49 is fully intact from Interstate 435 outside of Kansas City, Missouri, south to Interstate 40 near Fort Smith, Arkansas.  Of course, the original length in Louisiana is fully intact too, but an extension north to Interstate 30 at Texarkana (and slightly beyond) is completed too.  The only segment that still remains to be constructed will follow the western edge of Arkansas between Fort Smith and Texarkana; this, too, will follow the US Route 71 corridor. The northern, new segment runs from Interstate 435 in the outlying southern areas of Kansas City, south to Interstate 40 near Fort Smith, Arkansas. The southern segment runs from US Route 71, just north of Texarkana, Arkansas and Interstate 30, south to Interstate 10 at Lafayette, Louisiana, where the highway continues south as a surface road designated only as US Route 167.  Louisiana's DOT is planning a southern extension of the southern segment along the current US Route 90 corridor through Morgan City, Louisiana; since that plan really isn't put into motion yet, let's not get ahead of ourselves for now. 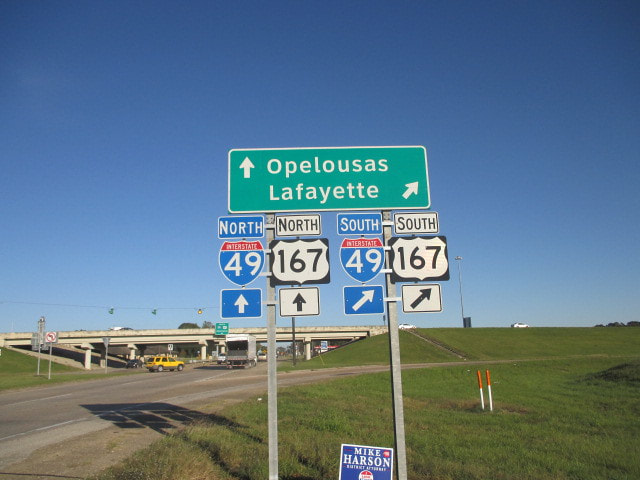 My photo of an Interstate 49 marker comes from the first interchange with a surface road, north of the Interstate's southern end in Lafayette, Louisiana.  Interstate 49's southernmost segment is concurrent with US Route 167; as such, this photo from along that segment is my photo for US Route 167 as well.  The signage depicted faces west, pointing out the ramp from the eastbound side of the road to Interstate 49 southbound. Interstate 10 lies less than a mile to the south of the scene photographed above. This photo was taken along the second leg of the first Gulf Coast trip in October 2014.
Back to the nationwide main page.
Back to the home page.