PAUL ACROSS AMERICA
US Route 87 is a north-south highway in Montana and a northwest-southeast highway in Texas, joined by a long and largely overlooked concurrency along Interstates 25 and 90.  The portion in Montana runs from the Canadian border north of Havre, south through Havre, southwest to Great Falls, and southeast to Billings.  At Billings, US Route 87 joins Interstate 90 south to Buffalo, Wyoming, where Interstate 25 gets its start and carries US Route 87 all the way to northern New Mexico.  In Raton, New Mexico, US Route 87 finally splits from Interstate 25 to head southeast through Amarillo, Big Spring, San Angelo, San Antonio, and Victoria, in Texas.  The southeastern end is in Port Lavaca, at no particular marked highway. 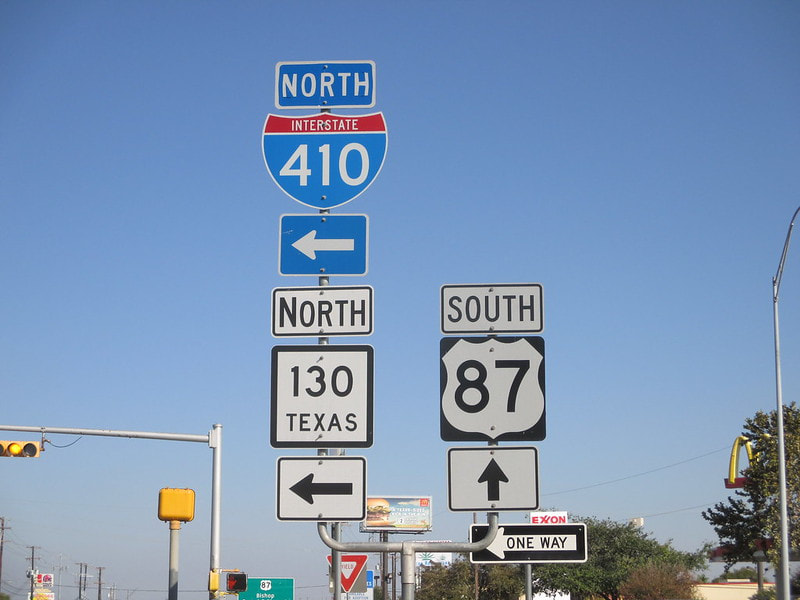 My photo of US Route 87 was taken serendipitously at an interchange linking US Route 87 with Interstate 410 on the east side of San Antonio, Texas.  I took a detour west to Texas at the tail end of my first trip to the Gulf Coast in October 2014, with the western extent of that detour intended for the eastern end of US Route 57 in southern Texas.  As I almost reached the western extent of the detour, I found this sign assembly where US Route 87 meets Interstate 410.  This sign assembly faces west, toward the Sun at this late part of the day.
Back to the nationwide main page.
Back to the home page.