Interstate 255 forms the southern and eastern portions of a beltway around St. Louis, Missouri, meaning that it spends most of its time in Illinois.  Some of Interstate 255 is in Missouri.  Interstate 255's northern end is at Interstate 270 northeast of Saint Louis, near Edwardsville, Illinois.  From there, Interstate 255 runs southerly and southwesterly, turning near Columbia, Illinois, to head westerly across the Mississippi River into Missouri for its remaining three miles.

Exits 1 to 3 are in Missouri, so this page will start at the first Illinois exit, Exit 6, and continue north to the final exit at Interstate 270.

Interstate 255 crosses into Illinois, with US Route 50 along for the ride, on a bridge across the Mississippi River: 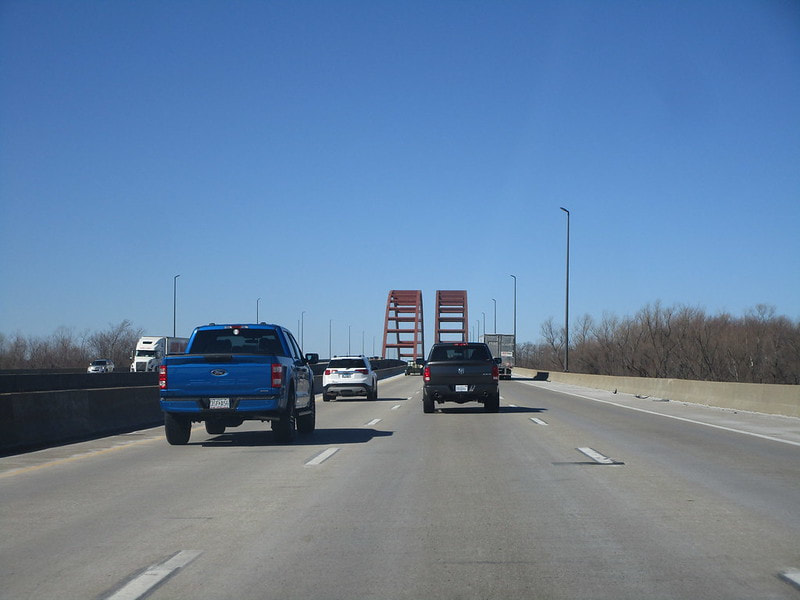 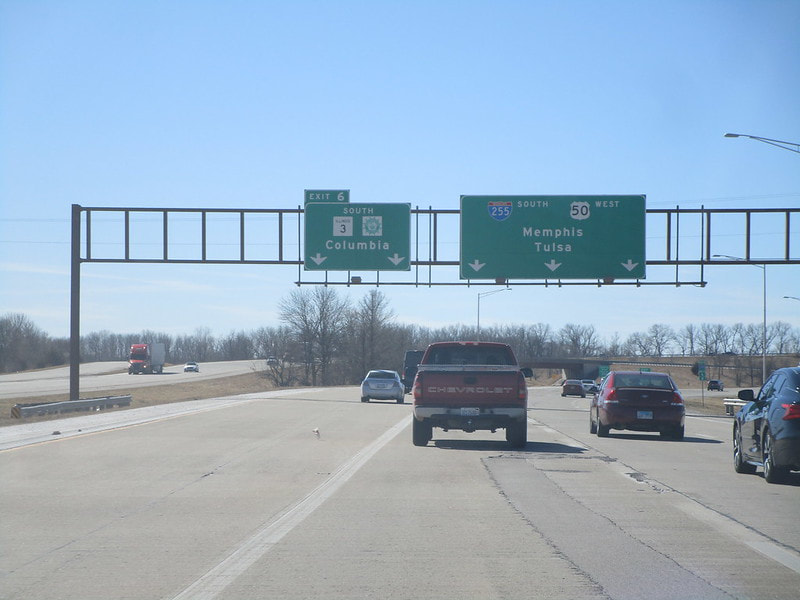 Exit 9 is sort of a half-folded interchange to access the town of Dupo: 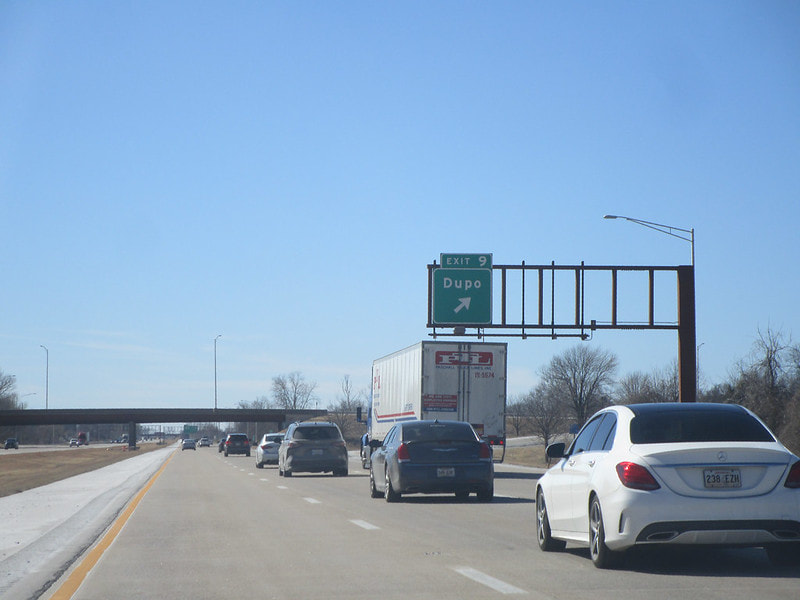 Exit 10 is a trumpet interchange that allows Illinois 3 to continue on its own route north toward Cahokia Heights and East St. Louis: 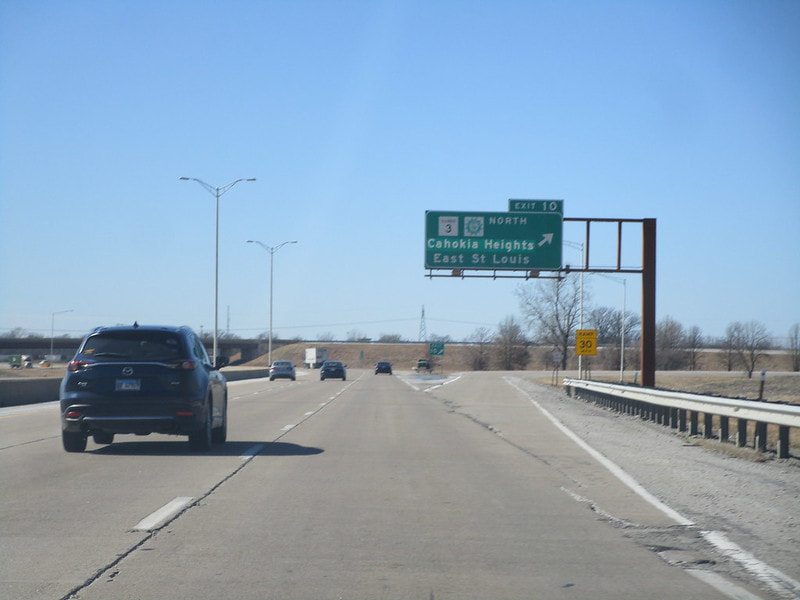 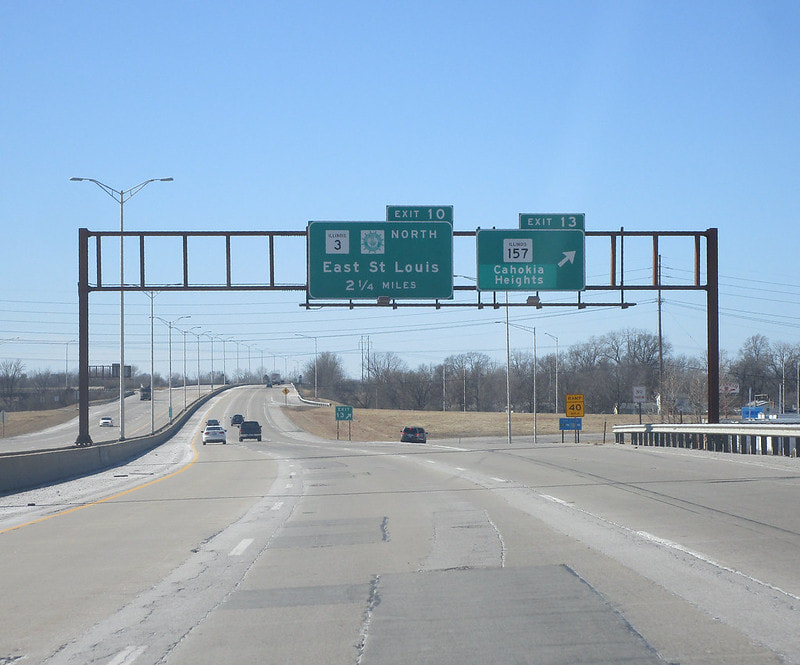 Exit 15 is a standard diamond interchange to Mousette Lane: 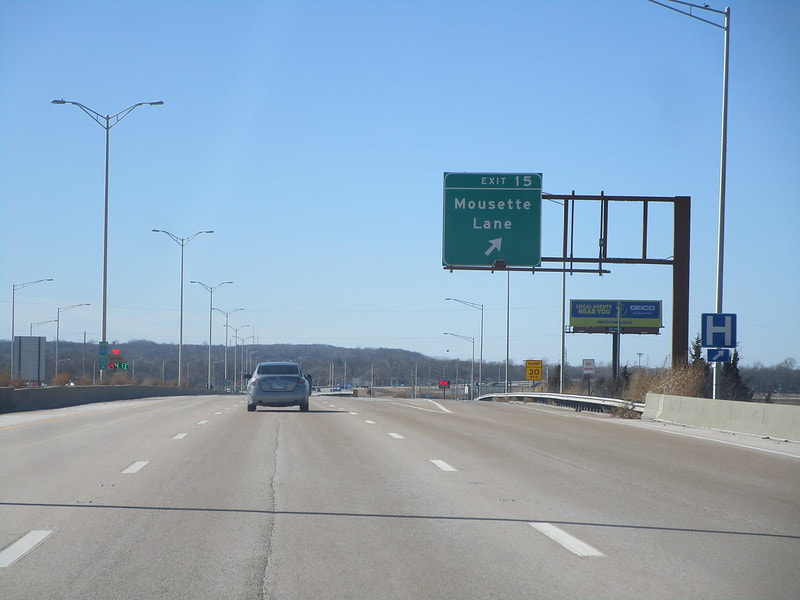 Exit 17A is the first half of a cloverleaf to Illinois 15; this first ramp leads eastbound toward Belleville: 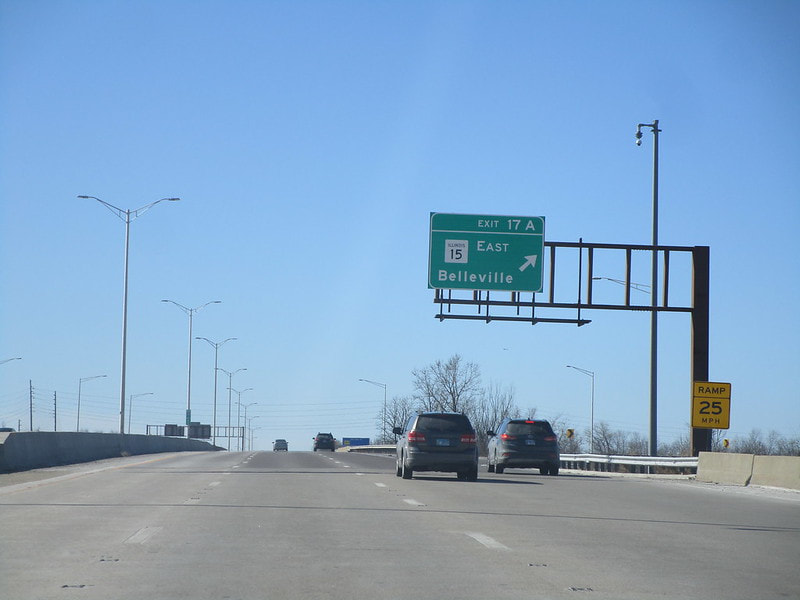 Exit 17B, the latter ramp in the cloverleaf, leads to Illinois 15 westbound along Missouri Avenue into East St. Louis: 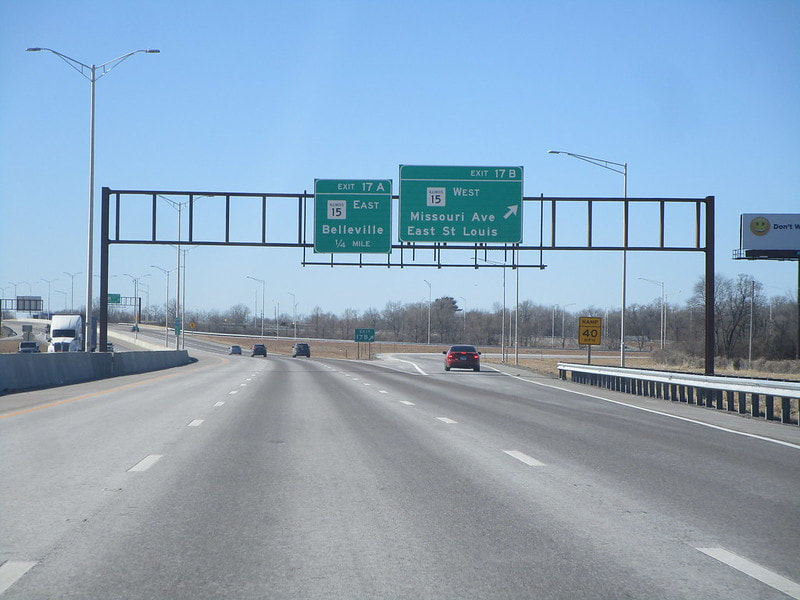 Exit 19 is for State Street into East St. Louis: 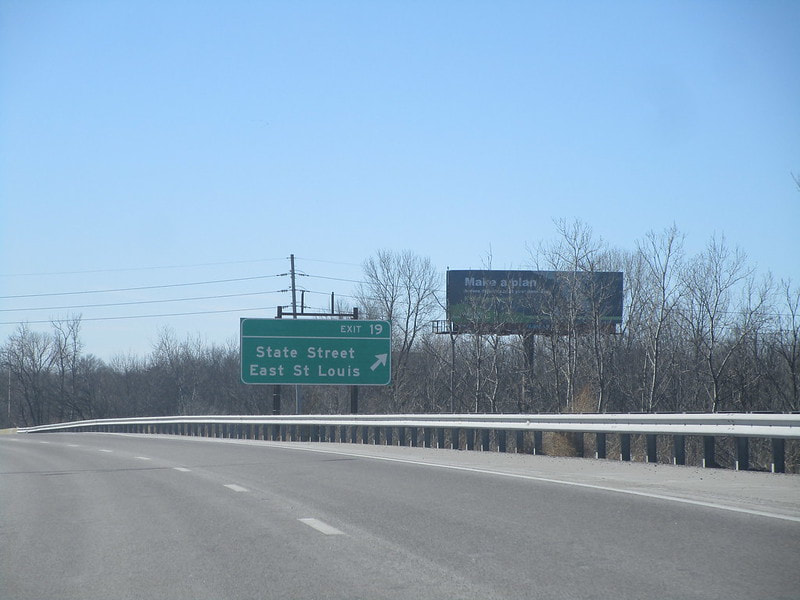 Exit 20A is the first half of a cloverleaf to Interstate 64; this first ramp leads eastbound toward Louisville, and it carries US Route 50 with it: 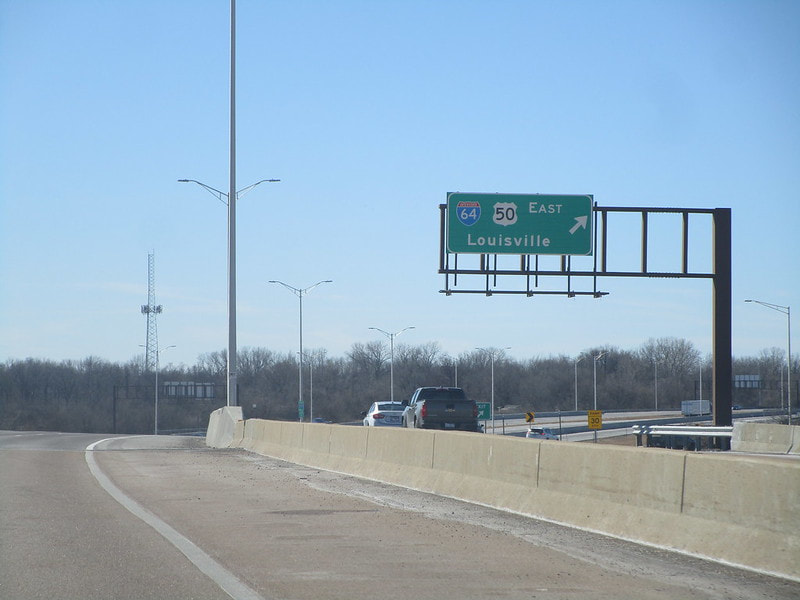 Exit 20B is the ramp to Interstate 64 west toward St. Louis (and it doesn't go much farther than that): 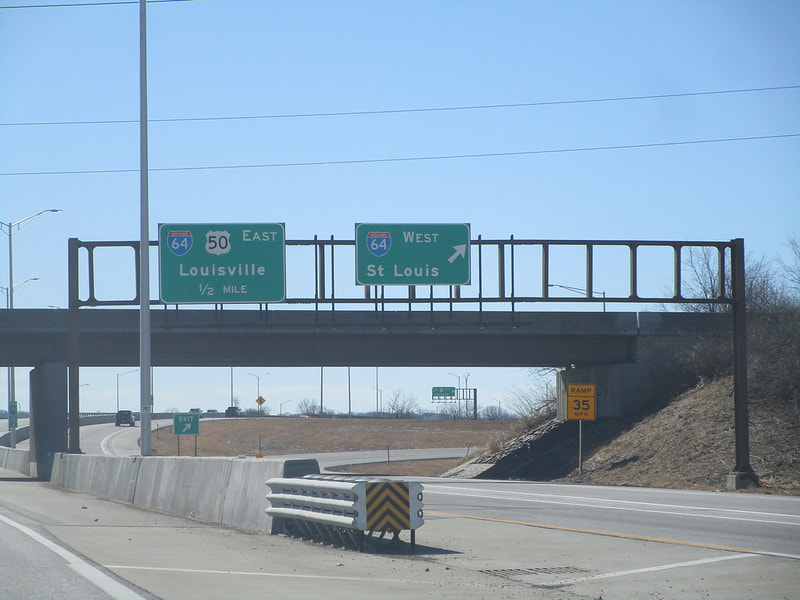 Exit 24 is a half-folded diamond interchange to Collinsville Road: 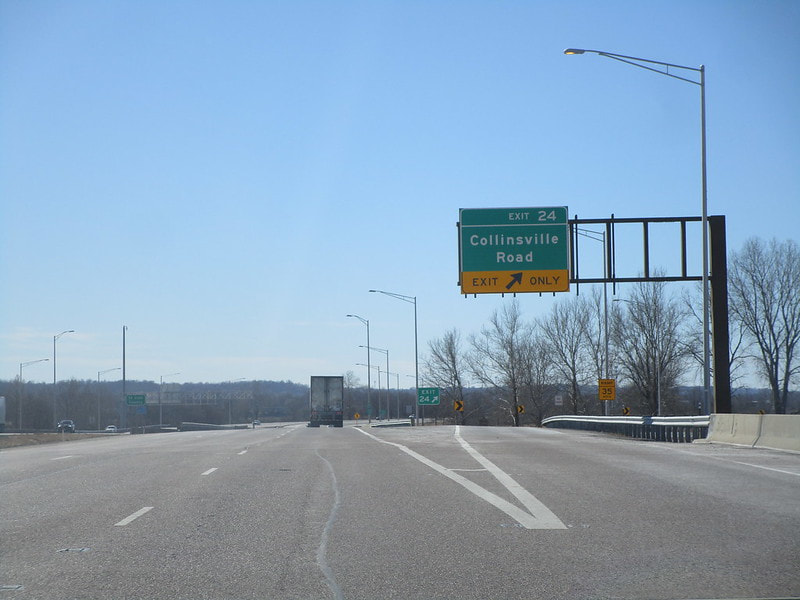 Exit 25A leads to Interstate 55 north and Interstate 70 east, toward Chicago and Indianapolis, respectively: 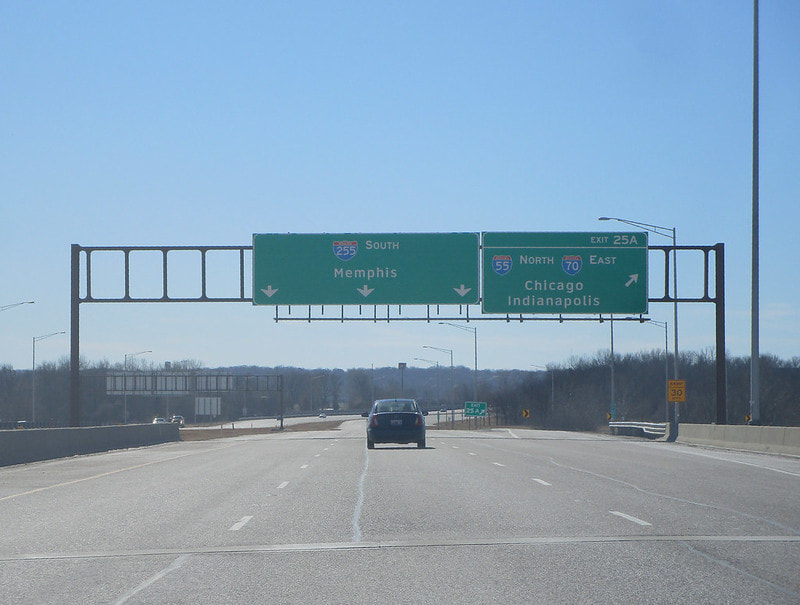 Exit 25B leads to Interstate 55 south and Interstate 70 west, toward St. Louis: 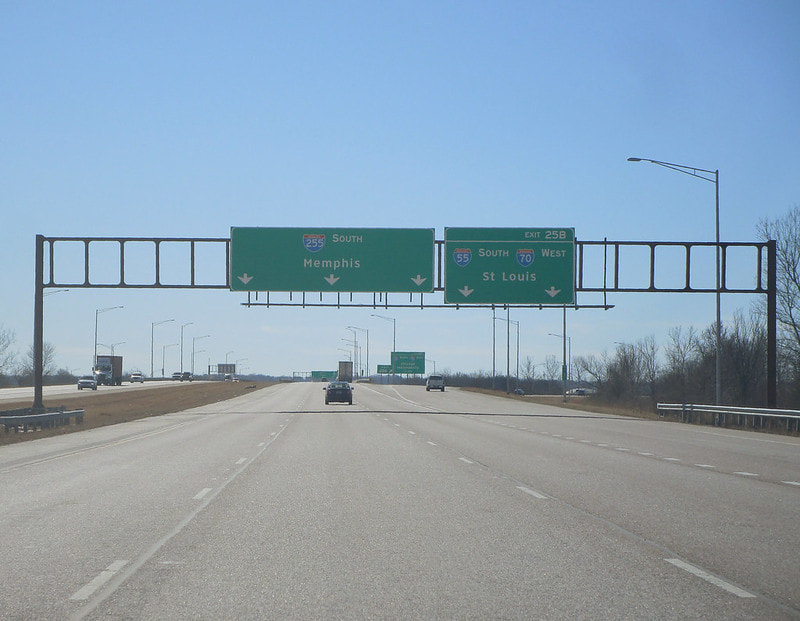 Interstate 255 continues a little bit farther north, to close the loop around St. Louis formed by Interstates 270 and 255. The next exit is Exit 26, a fountain interchange for Horseshoe Lake Road: 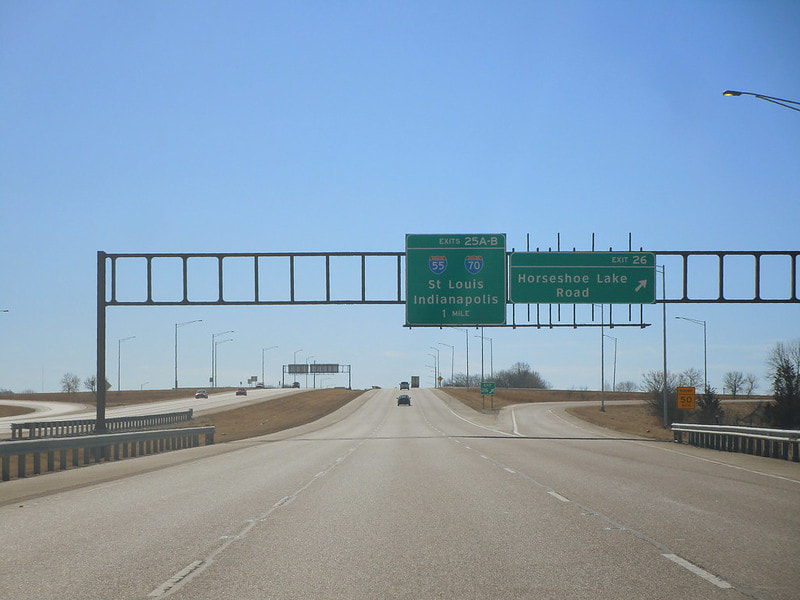 Exit 29 is another fountain interchange; this one leads to Illinois 162, signed as a way to the rocky towns Glen Carbon and Granite City: 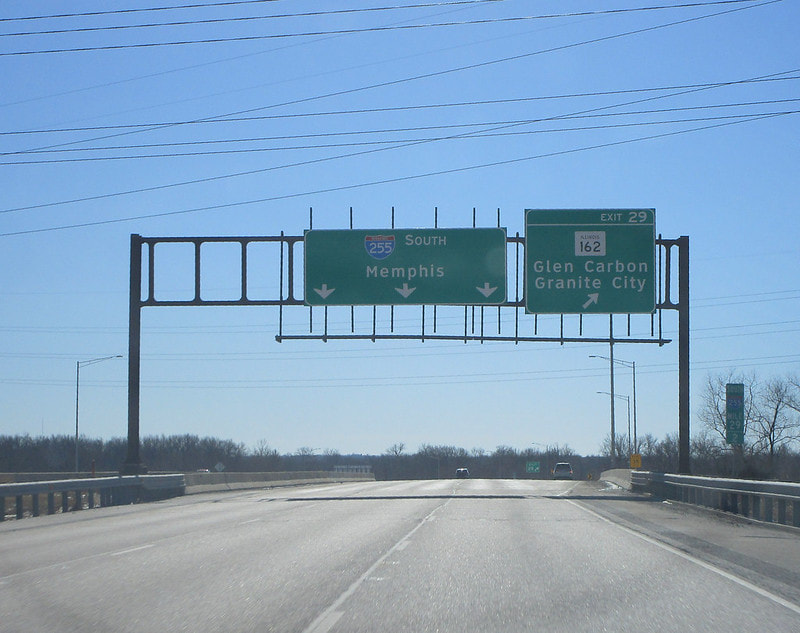 Exit 30 marks the end of Interstate 255, but the highway continues northward as a freeway labeled "Illinois 255"; the exit leads to Interstate 270: 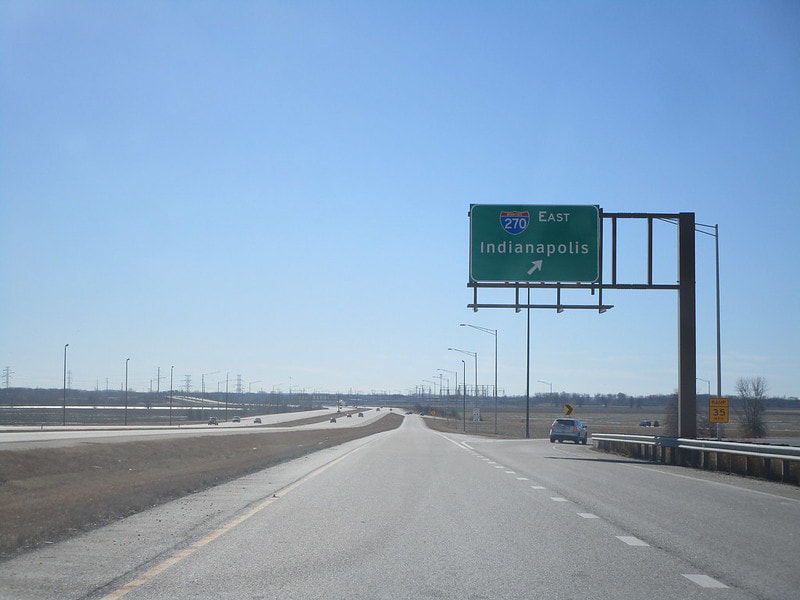 The ramp at Exit 30 divides into two ramps; the left ramp leads to Interstate 270 westbound toward Kansas City, as the ramp on the right leads to Indianapolis via Interstate 70...
Back to the Illinois main page.
Back to the home page.