PAUL ACROSS AMERICA
US Route 20 is the longest US highway in the whole United States, running from the Oregon Coast to Boston, Massachusetts.  The western end is at US Route 101, in the coastal town of Newport, Oregon.  US Route 20 heads east from there across the middle of Oregon, through Corvallis and Bend.  US Route 20 crosses into Idaho at Ontario, Oregon, along with US Route 26 and US Route 30.  In idaho, US Route 20 follows the Snake River Valley through Boise, cutting northeast through Idaho Falls to the northeast corner of the state. US Route 20 clips the southern tip of Montana, home of the town of West Yellowstone, before passing through Yellowstone National Park in Wyoming.  Onward through the rest of Wyoming, US Route 20 heads for Casper and the middle of the state's eastern border, which it crosses to reach northern Nebraska.  US Route 20 hugs the northern edge of Nebraska, and then crosses Iowa as a major highway from Sioux City to Waterloo to Dubuque.  US Route 20 crosses the Mississippi River from Dubuque into the northernmost counties of northwestern Illinois, turning southeasterly toward Chicago once it reaches Rockford.  After running through Chicago, flanking the downtown to the west and to the south, US Route 20 heads east through the northernmost row of counties in Indiana, meeting Gary, South Bend, and Elkhart.  It also hugs the northern edge of Ohio, passing through Toledo and Cleveland.  US Route 20 exits Ohio following the Interstate 90 corridor into Pennsylvania and western New York.  In fact, US Route 20 is never far from Interstate 90 at any point in New York, but east of Buffalo, it's usually the next highway to the south of the Interstate.  US Route 20 passes through Albany and enters Massachusetts, still refusing to stray far from Interstate 90.  An end marker for US Route 20 is posted (as of writing this) at the corner of Commonwealth Avenue and Beacon Avenue, in Boston, Massachusetts.  Beacon Avenue carries Massachusetts Route 2, and Commonwealth Avenue carries US Route 20 until Massachusetts Route 2 takes over. 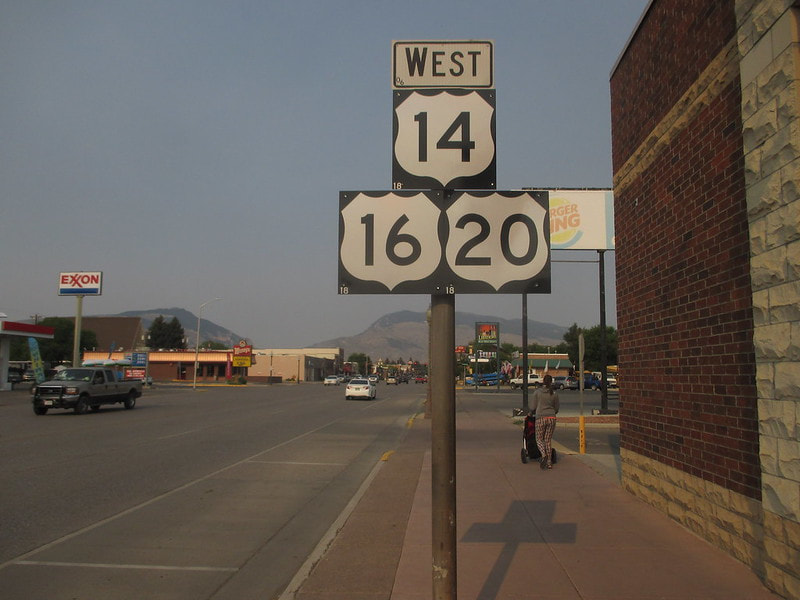 My photo for US Route 20 comes from Cody, Wyoming, where it's concurrent with US Routes 14 and 16. Cody is the next town east of Yellowstone National Park, and this photo was taken looking west, toward the park.  US Routes 14 and 16 join US Route 20 west to the park, but those routes both end at the park entrance.  The trip back west from the Pacific Ocean in August 2018 featured a visit to Yellowstone National Park, and I stayed in Cody to give myself a couple days to visit the park.  This photo was taken at that time, and it shows a westbound trailblazer pointed toward the intersection with Wyoming State Highway 120 and US Route 14's Alternate alignment.
Back to the nationwide main page.
Back to the home page.