​​​​US Route 23 in Michigan hugs the eastern edge of the Lower Peninsula when it's north of Saginaw Bay, and to the south of Saginaw Bay, it connects Flint, Ann Arbor, and Toledo, on a direct north-south freeway.  That was a long first sentence, but US Route 23 wears two clearly different hats.  The northern end of US Route 23's entire route is a partial interchange where it merges with or splits from Interstate 75 at Mackinaw City.  From there US Route 23 heads easterly and southerly along the southwestern shore of Lake Huron, passing through Cheboygan, Rogers City, and Alpena.  It traces a backward "C" to Standish, at the northwestern end of Saginaw Bay.  At Standish, US Route 23 joins Interstate 75 south all the way to Flint, where US Route 23 enters its freeway phase.  Whereas Interstate 75 bends to the southeast to Detroit, where it bends back southwesterly to Toledo, US Route 23 forms a more direct long-term freeway connection from Flint to Toledo.  I'm almost surprised that a 3-digit Interstate designation wasn't given to US Route 23's freeway section in southeast Michigan; it could be considered a sort of bypass around Detroit.  The southern extent of US Route 23 in Michigan is a border crossing into Ohio, just northwest of Toledo at the town of Sylvania, Ohio.  US Route 23 is still a freeway at this point, and it merges into Interstate 475 soon after entering Ohio. 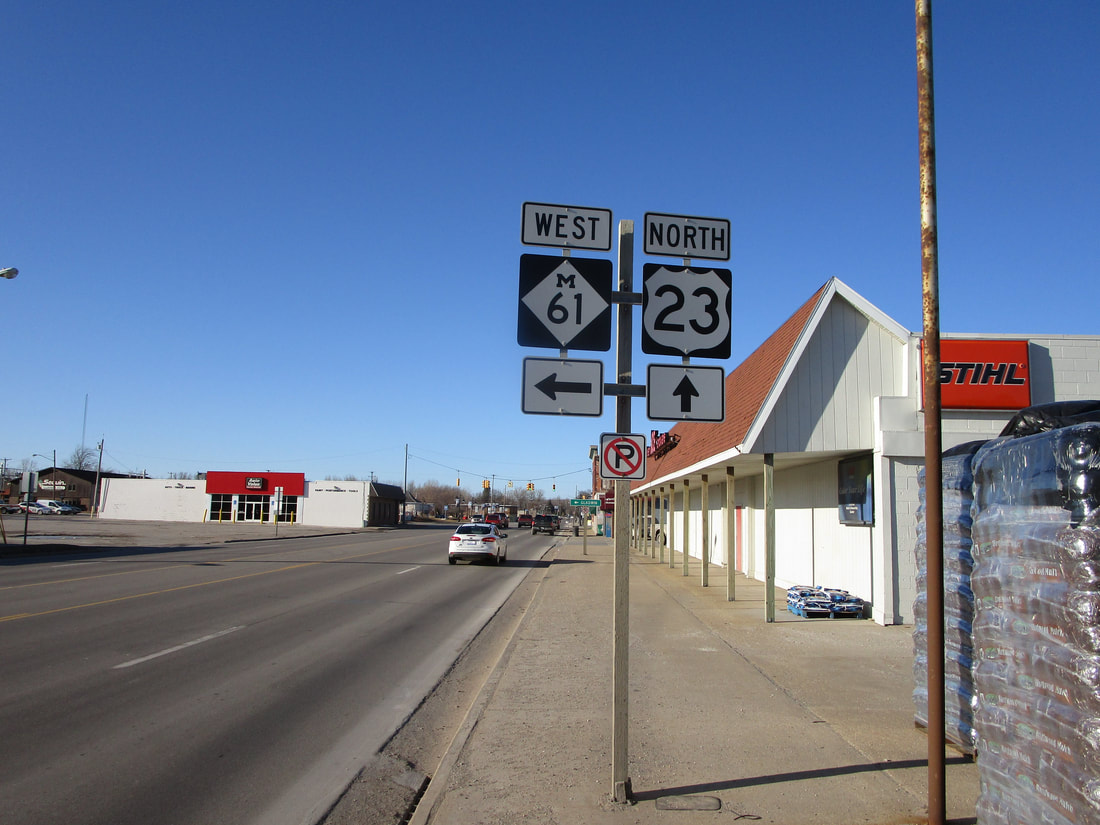 My photo of US Route 23 in Michigan shows a guide assembly in Standish, Michigan, where Michigan Highway 61 meets US Route 23.  The location of this photo is among the southern reaches of the northern phase of US Route 23, where it follows a rural surface highway alongside Lake Huron. Northbound travelers on US Route 23 in Standish can identify the location of the westward turn onto Michigan Highway 61, thanks to this sign assembly. This photo was taken in March 2019, as I was driving around middling and southern portions of the Lower Peninsula.