Iowa Route 122 is an east-west route designated only a couple of decades ago, serving as a business route through Mason City. As part of the Avenue of the Saints expressway (Iowa Route 27) was completed in 1999, flanking Mason City to the south, US Route 18 was moved onto that expressway to bypass the city.  When US Route 18 was moved from the main east-west thoroughfare through Mason City to a faster bypass to the south, a new designation of Iowa Route 122 took over that main east-west thoroughfare through town. The western end is an interchange with Interstate 35 at Clear Lake, just west of Mason City; at this point, US Route 18 jumps south on Interstate 35 to transfer onto the expressway bypass eastward, which is part of the Avenue of the Saints (Iowa Route 27). Iowa Route 122 heads through Mason City's main shopping area on the west of down before splitting into a pair of one-way streets through downtown Mason City.  The eastern end of the highway is very random and abrupt; it isn't even at an intersection with another road.  The eastern end of Iowa Route 122 occurs at the eastern municipal boundary of Mason City, a longitudinal line half a mile east of County Road S56; at this point, Iowa Route 122 terminates, and the roadway becomes County Road B30. The portion of Iowa Route 122 west of downtown Fort Dodge is co-signed as Business US Route 18 (that's most of the route). 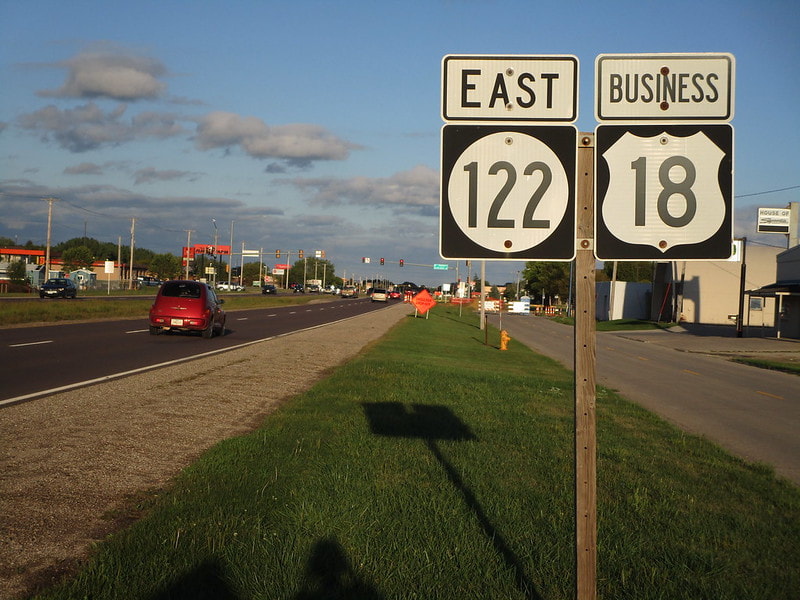 My photo for Iowa Route 122 comes from an eastbound trailblazer on Iowa Route 122.  The trailblazer is located just east of the intersection with Eisenhower Drive.  I took this photo along my September 2019 trip across northern Iowa.  You can tell it was the last photo I took that day, as the low-lying sun in the western sky is zapping this sign assembly (I stayed in Clear Lake that night).  You can also note the co-signing with Business US Route 18 that I mentioned above.
Back to the Iowa main page.
Back to the home page.