Mesa Verde National Park is neither a mesa nor particularly green, but it hosts many sets of intriguing ruins left behind by ancient Pueblo peoples.  The park is located in the southwest corner of Colorado, and the road into the park stems off of US Route 160 east of Cortez, Colorado. The ruins in the park take the form of cliff dwellings, positioned underneath shelves of land that protrude out into the park's various canyons.  Chronologically, the cliff dwellings hail from the twelfth and thirteenth centuries A.D.  Aside from the fascinating history of the native peoples shared throughout the park, Mesa Verde hosts a slew of striking landscapes, scenery, and overlooks.  Chapin Mesa and Wetherill Mesa are the two main destinations in the park; where the road forks into one branch for each of the main "mesas", there lies a central area of the park home to the park headquarters, shops, cafes, and the high point of the park. My visit to Mesa Verde National Park gave me a taste of the few different regions of the park. Exploring the park at the start of September, 2022, I managed to take in the park's high point, sites on Chapin Mesa, and a guided tour on Wetherill Mesa.

Park Point, home to the highest elevation found within Mesa Verde National Park, offers some of the best top-down views around.  Looking northwest, I could see my hotel all the way in Cortez!  The "Ship Rock" of Shiprock, New Mexico, is also visible to the southwest.  Portions of Utah and Arizona are also visible from up here. The fire lookout for the national park is stationed up here, too. 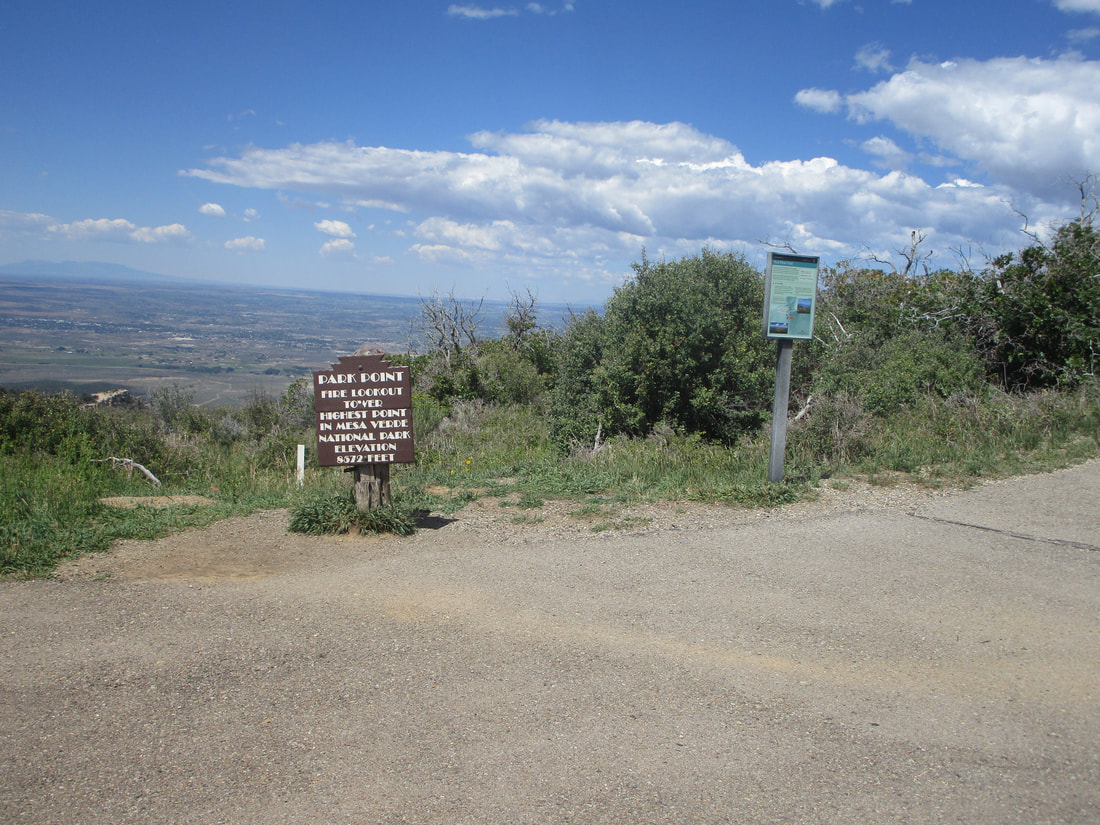 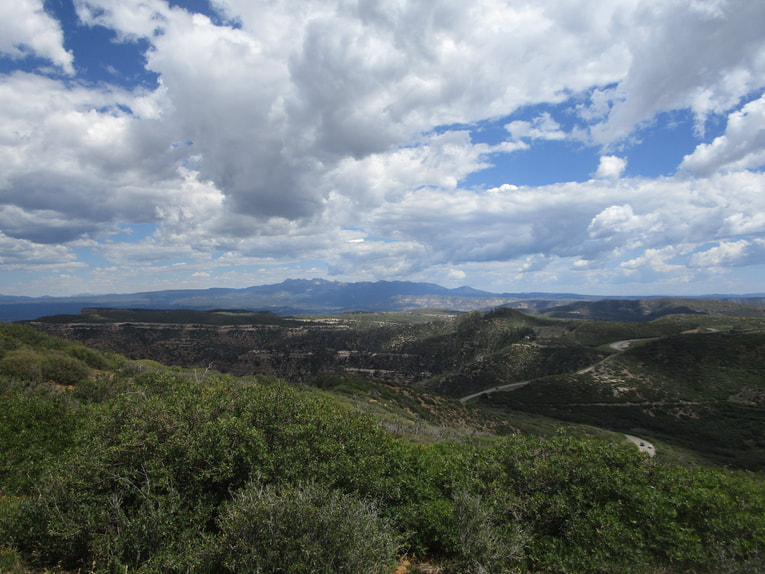 ​After checking out the views at Park Point, we proceeded to Chapin Mesa, in the southeastern portion of the park. Cliff Palace was the first Pueblo cliff dwelling we got to observe. An overlook gives you the chance to see them from a comfortable distance, but guided tours are also available for those who want to get up-close and personal. We did purchase tickets to see a guided tour of a cliff dwelling, but the cliff dwelling we saw was the Long House on Wetherill Mesa.  Stay tuned for that; it was the last thing we saw at Mesa Verde.

Across the canyon from Cliff Palace, other scattered Pueblo ruins can be noted. 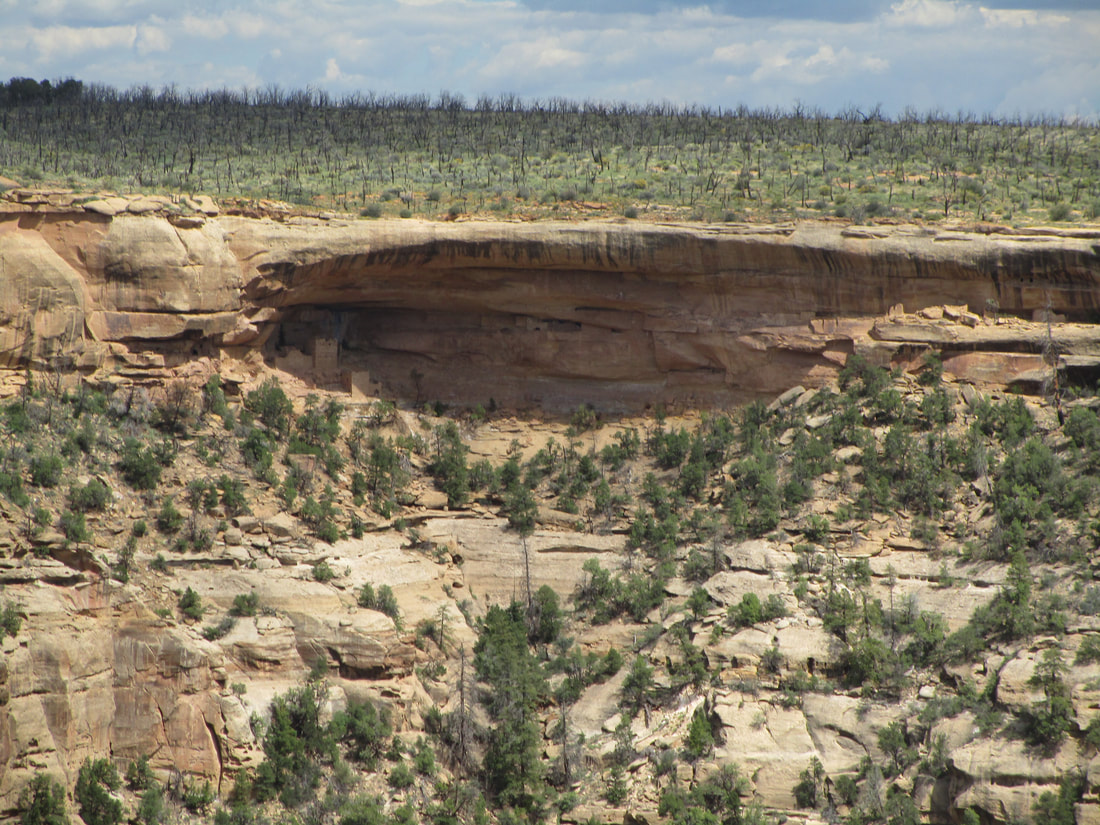 The Soda Canyon trail was a short trail to a series of three overlooks.  We were captivated by a distant thunderstorm appearing on the horizon, booming thunder as we hiked the trail.  Another cliff dwelling, the Balcony House, sat nearby, but the trail down to it was closed.  Fortunately, the overlooks on the Soda Canyon trail gave us the opportunity to see the Balcony House from across the canyon.

Other views from the Soda Canyon overlooks.

The thunderstorm was basically posing in front of this sign about water:

We circled back to the middle of the park, where the park museum and the park headquarters lie. The Spruce Tree House, another set of Pueblo ruins, sits at this location as well.

The Knife Edge Trail is a trail on the north side of the park, with nice views to the north, and it takes almost an hour in one direction. The trail departs from a trailhead near the Morefield Campground, which is only 4 miles into the park.  We had to pass through the park road's tunnel to get back out to this point, though:

The views toward the north are exquisite, and the view to the south reveals that you're walking downhill of a much higher bluff. 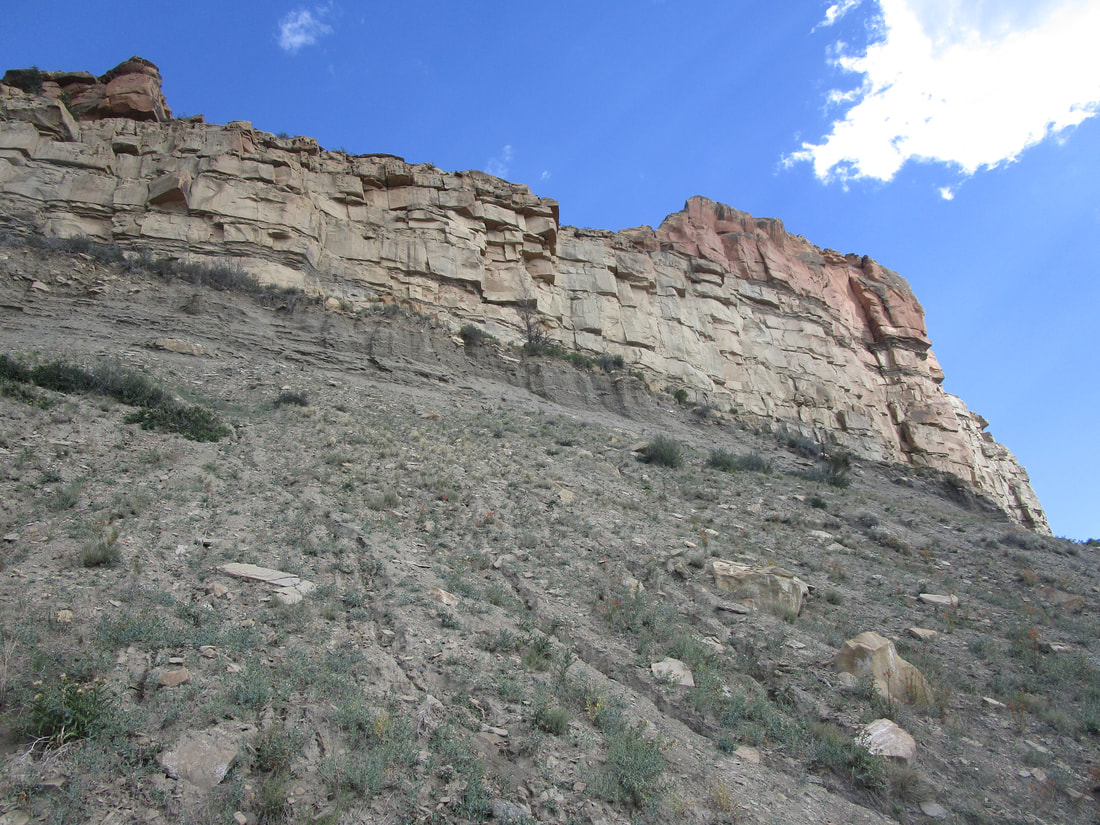 The path is lined with flowers, and these paper guides at the trailhead will tell you about all of the foliage along the trail.  Various flowers, trees, and shrubs have numbers posted next to them, and the paper guide will identify each one with some interesting facts. 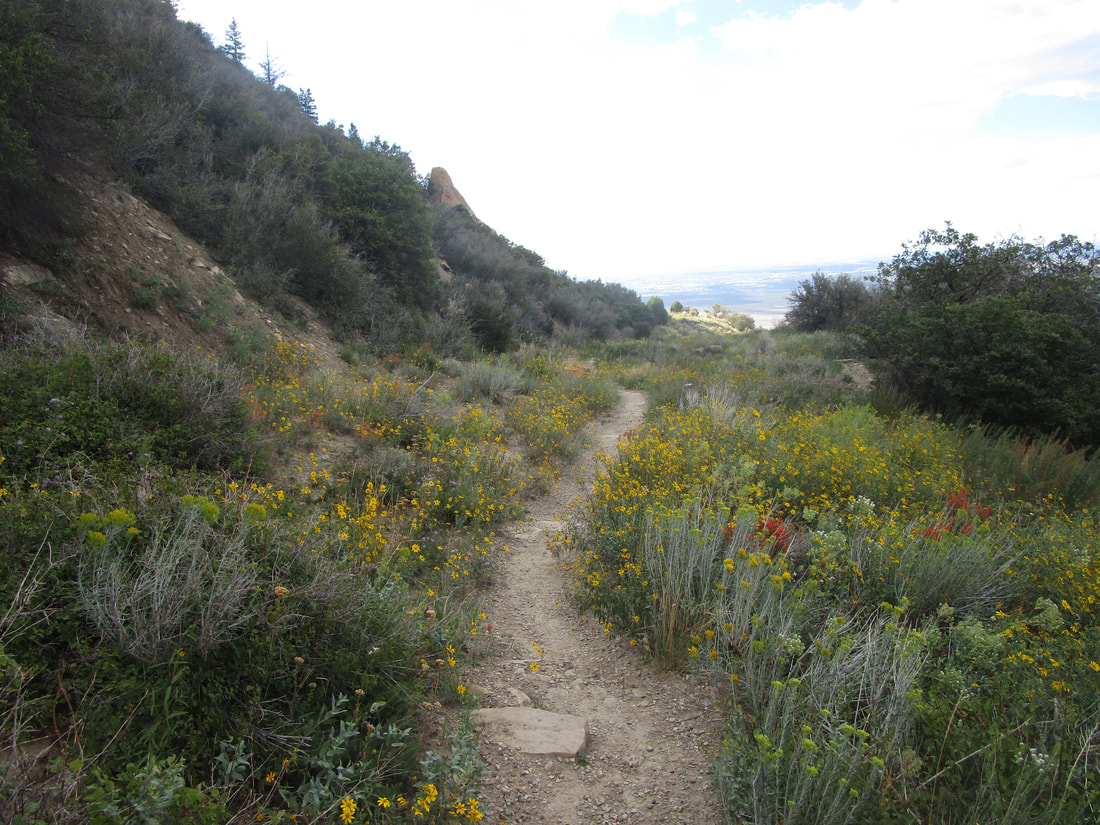 The end of the trail provides a view of the "Knife Edge", the jutting piece of land in the background:

We went on a guided tour of the ruins of an ancient Pueblo community housed under the shelf of a cliff overlooking a canyon.  Because the ruins occupy the greatest length of a cliffside of any cliff dwelling in the park, this set of ruins was named the "Long House". Guided tours of the ruins require tickets, and the tickets must be purchased in advance at www.recreation.gov. The tickets are very cheap; their main purpose is simply crowd control. Be advised that the road to Wetherill Mesa and the Long House area is long and full of sharp curves.  It takes about 45 minutes to get from the park entrance to Wetherill Mesa; be sure to take this into account when you plan your time to start the tour.

Our first glimpse of the Long House:

The first time the tour guide stopped to explain some truths about the ruins, we were situated beneath the cliff in this shady spot here.  Our tour guide was amazing.  He was passionate, engaging, knowledgeable, and energetic.  Getting to this spot required us to scale a pair of 15-foot ladders.

This room in the ancient Pueblo community is called a kiva.  It serves as a sort of living room or common room. A fire would burn in the circular pit, and the wall was used to control the smoke.

The nooks way up high above the rest of the community were used as granaries.  Food would be stored high and dry, away from the seeping spring in the back to the community.

The community common room is located at the bottom, in the middle of this photo.