Interstate 72 runs east-west across central Illinois, from Hannibal, Missouri, east to Champaign, Illinois.  The freeway exists almost solely within Illinois's borders, barely poking its head westerly into Missouri.  It passes through Jacksonville, Springfield, and Decatur on its way from Hannibal to Champaign.  US Route 36 runs concurrently with Interstate 72 for the long stretch between Hannibal and Decatur, a stretch accounting for over half of Interstate 72's length.  Travelers continuing east from Champaign can jut northward on Interstate 57 for two miles to access Interstate 74 toward Indianapolis.  Travelers continuing west will be led onto a rural expressway carrying US Route 36, which is a fast, smooth ride across northern Missouri.

Exits will be labeled from west to east, as is customary for latitudinal (east-west) highways.

Interstate 72, overlapped with US Route 36, crosses into Illinois on a bridge over the Mississippi River out of Hannibal, Missouri...
Exit 1 is to the western end of Illinois 106, which parallels Interstate 72 to the south for its first 50 miles, with access to Hull, Illinois...
Exit 4 is where Interstate 72 merges with the southern end of Interstate 172, a northward spur providing access to Quincy...
Exit 10 is for Illinois 96, linking to Hull and Payson, and Illinois 106 just to the south is listed on the signage as well...
Exit 20 is for Barry, leading to a county road...
Exit 31 is to another county road, linking to New Salem and Pittsfield...
Exit 35 is to the point where the northeastern end of US Route 54 transitions into the southern start of Illinois 107, which leads to Griggsville; taking US Route 54 south leads to Pittsfield...
Exit 46 is for Illinois 100, which leads to the small town of Bluffs...
Exit 52 is to a local road leading to Winchester...
Exit 60A is the first of two ramps at a cloverleaf at US Route 67 near Jacksonville, and this first ramp leads to US Route 67 south toward Alton...
Exit 60B is a way to access the western start of Business Loop 72 through Jacksonville, which starts by heading north along US Route 67; this ramp to US Route 67 north can also provide access to Beardstown...
Exit 64 is a diamond interchange to Illinois 267, leading to Jacksonville and Greenfield...
Exit 68 is to the eastern end of Business Loop 72 through Jacksonville, and it can be used to access Illinois 104 which isn't far away...
Exit 76 provides access to Alexander and Ashland, Illinois...
Exit 82 connects to New Berlin...
Exit 91, on the western edge of the Springfield area, leads to Loami and Wabash Avenue...
Exit 93 is for Illinois 4, which leads to Chatham to the south and becomes Veterans Parkway to the north in Springfield...
Exit 96 is a diamond interchange to MacArthur Boulevard in Springfield...
Exit 97A leads to Interstate 55 south toward St. Louis, as Interstate 55 joins Interstate 72 east, but this is a 4-way junction sending Business Loop 55 to begin heading northward, as you'll see in the next exit: 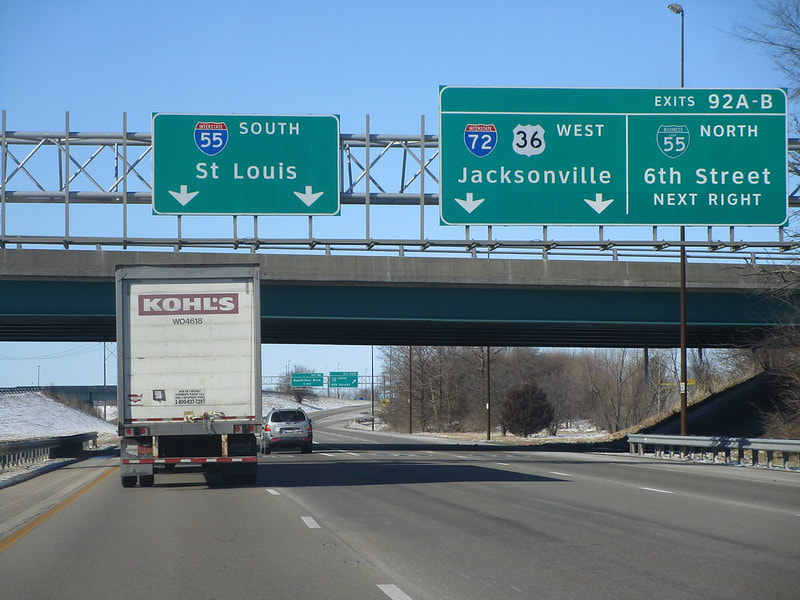 Exit 97B leads to Business Loop 55, known as 6th Street, at the second half of the interchange where Interstate 55 joins Interstate 72 and spawns Business Loop 55 north into Springfield...
The next exit uses Interstate 55's exit numbering scheme, giving said exit the number 94; this exit is for East Lake Drive and Stevenson Drive: 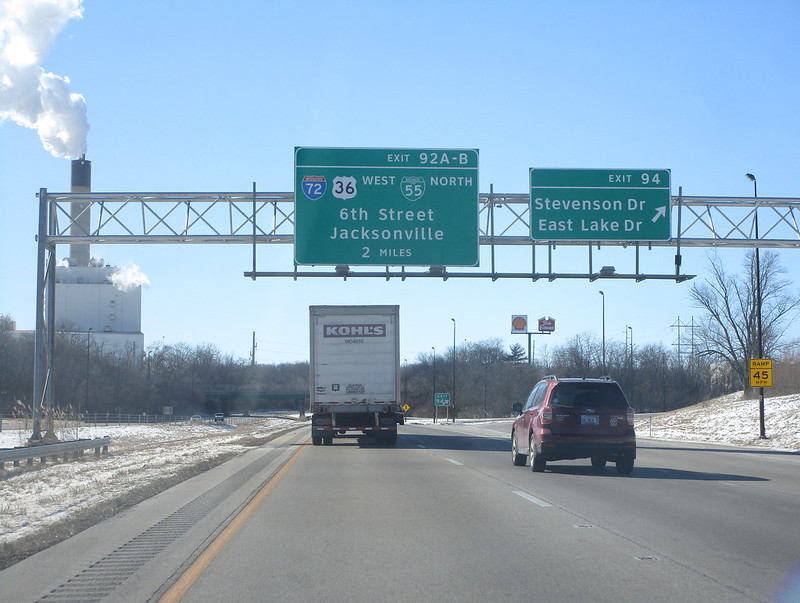 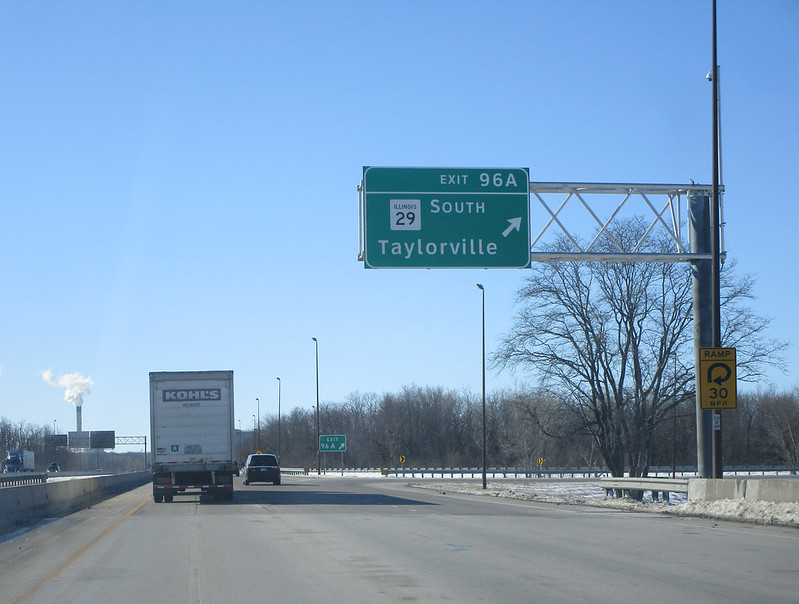 Exit 96B is for Illinois 29 north, leading to South Grand Avenue in Springfield: 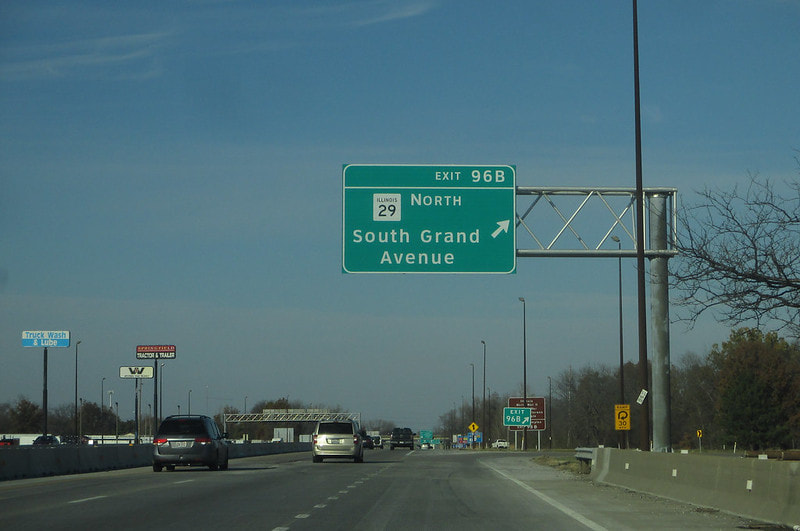 Exit 98A from Interstate 55 allows Interstate 72 to split away and resume its easterly direction toward Decatur; the exit number from westbound to continue north on Interstate 55 toward Chicago is 103B: 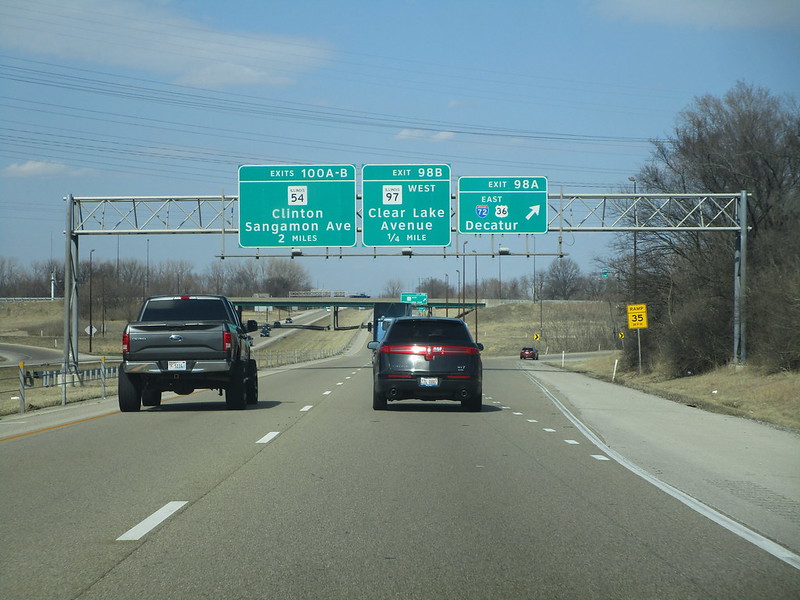 Exit 98B from Interstate 55 is to access Illinois 97 as it starts off westerly into Springfield (the exit number from westbound should be 103A but the signs put the exit number tab on the wrong sign): 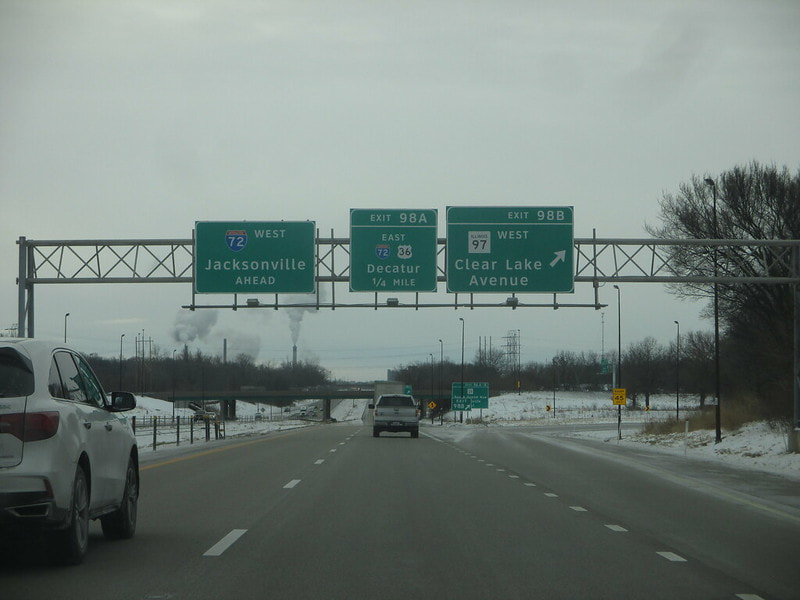 The next exit on Interstate 72 is exit 104, leading to Camp Butler: 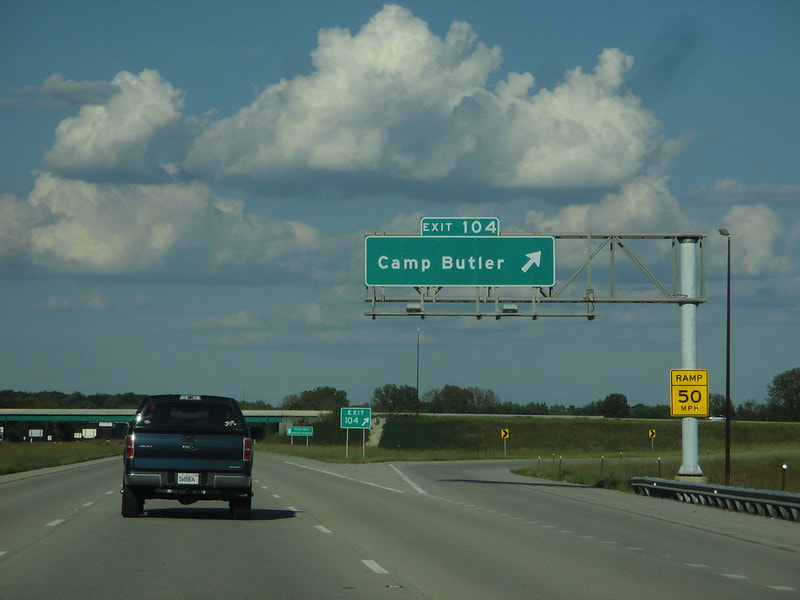 Exit 108 leads to the villages of Riverton and Dawson: 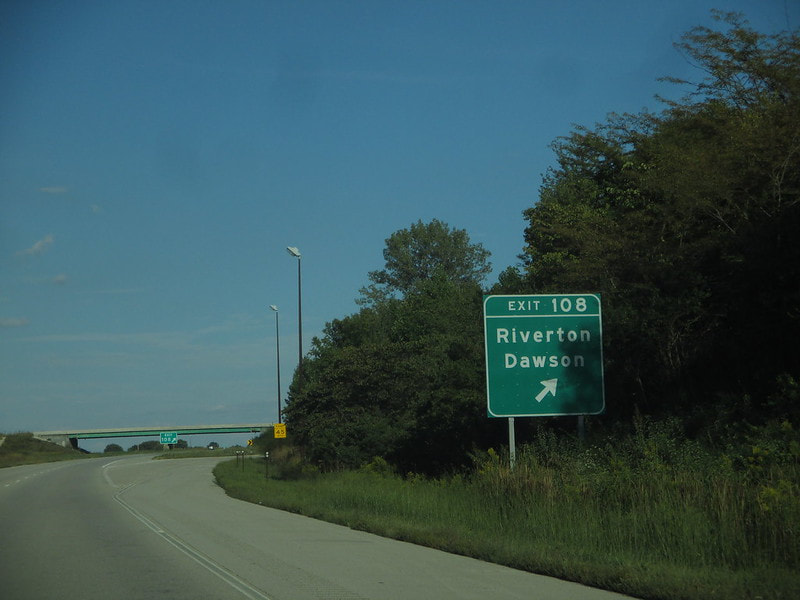 Exit 114 provides access to the Illinois towns of Buffalo and Mechanicsburg: 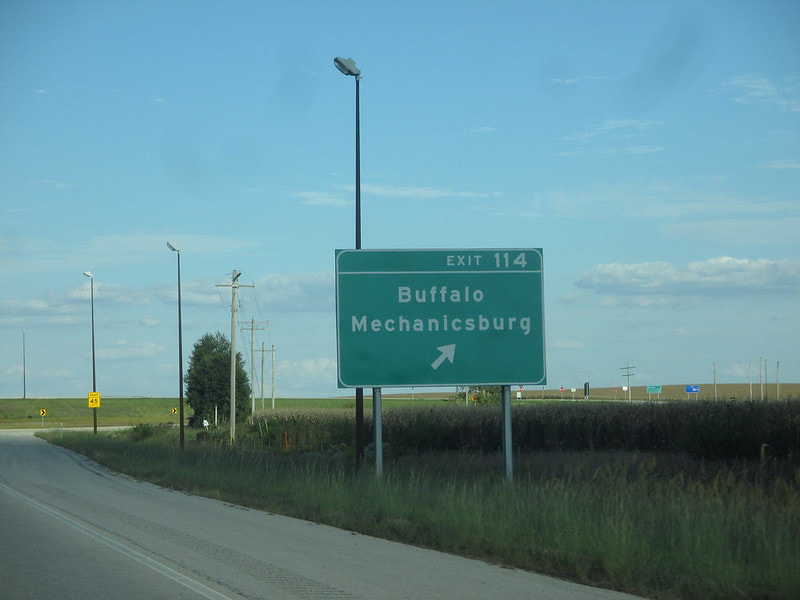 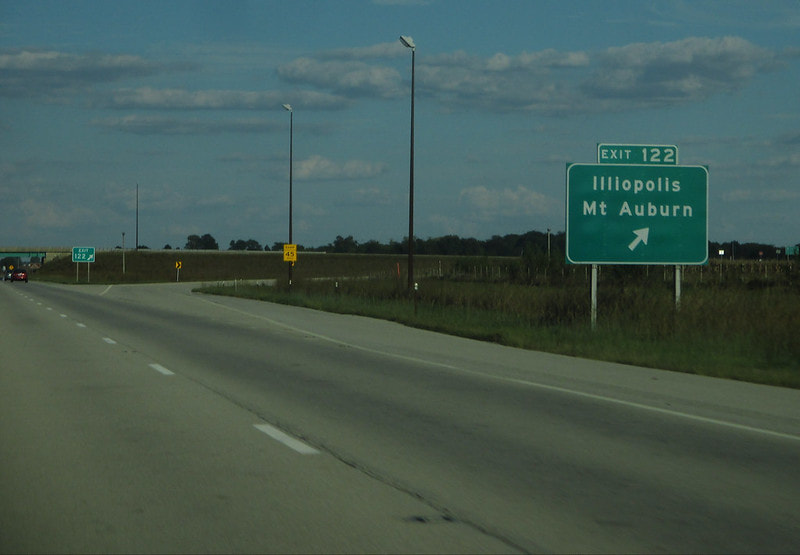 Exit 128 is signed as the way to Niantic: 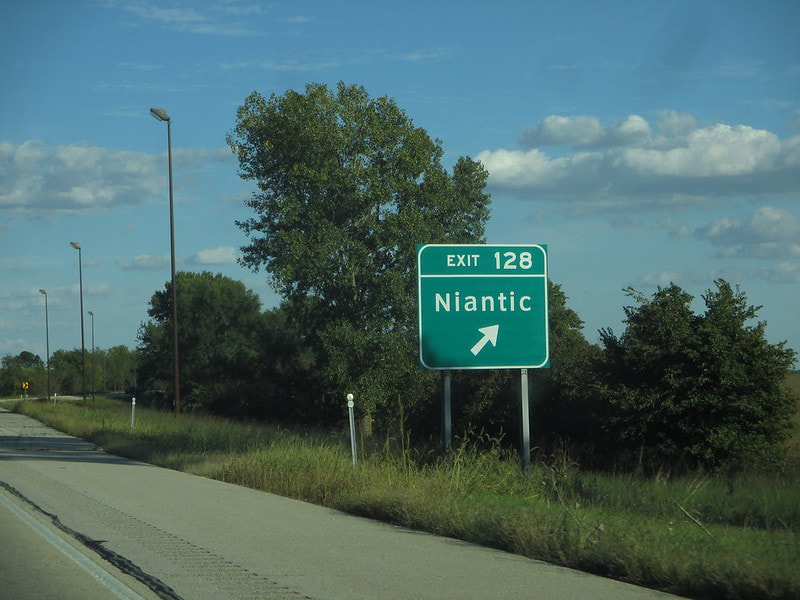 Exits 133A and 133B signal Interstate 72's entry into Decatur. The first exit, labeled 133A, gives US Route 36 its first chance to exist independently since it crossed the Mississippi River.  At this interchange, Interstate 72 bends northerly to bypass Decatur around the city's north side, but US Route 36 continues due east into Decatur's city center: 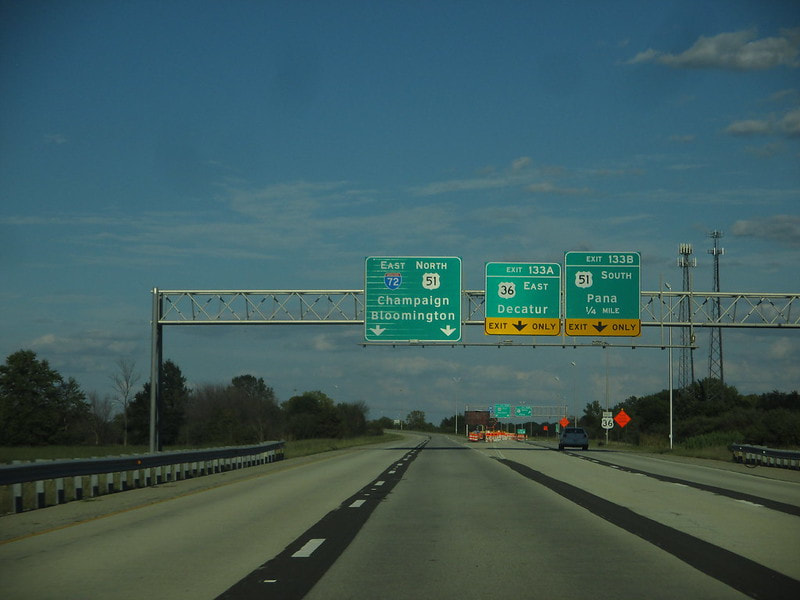 Exit 133B provides access to US Route 51's southern continuation toward Pana; US Route 51 joins Interstate 72 north at this point. 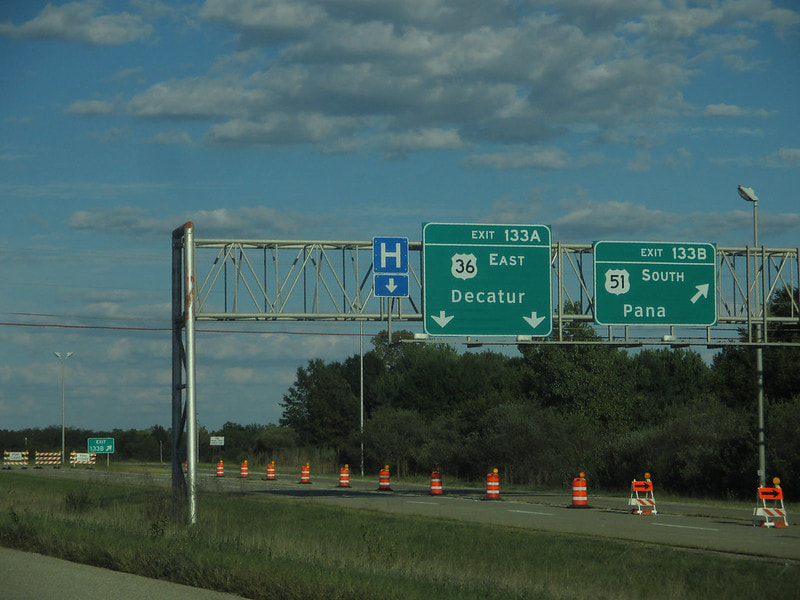 Exit 138 is a fountain interchange for Illinois 121, which leads to Lincoln and Decatur: 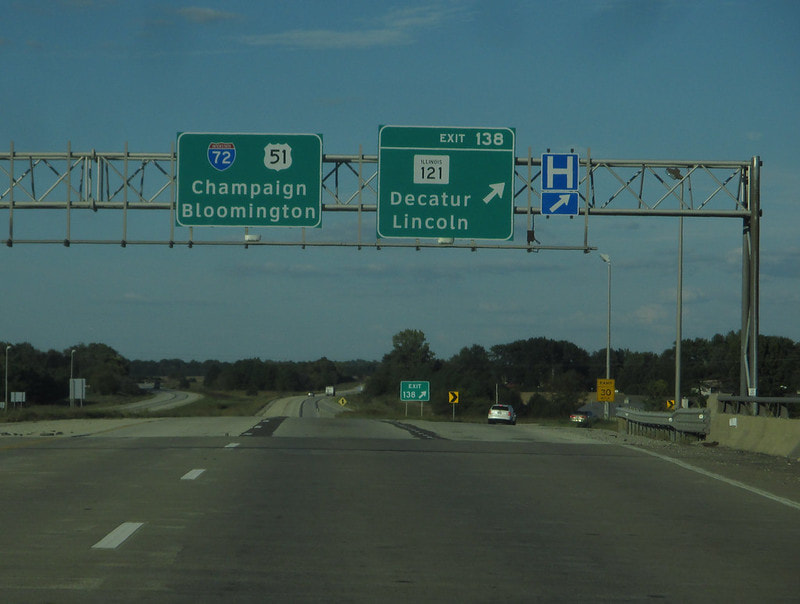 Exit 141A is the first ramp of two at a cloverleaf interchange due north of Decatur's downtown.  This interchange marks the easternmost extent of Interstate 72's concurrency with US Route 51.  The first ramp here leads south on a road that, until recently, carried the designation of "Business US Route 51".  This points travelers south toward downtown Decatur: 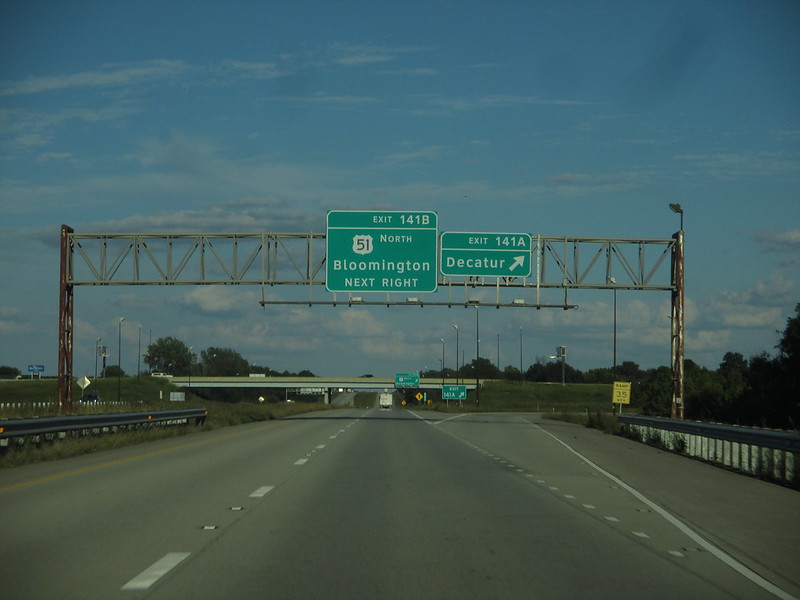 Exit 141B, the second ramp of the cloverleaf interchange, leads to US Route 51's northern leg, bound for Bloomington: 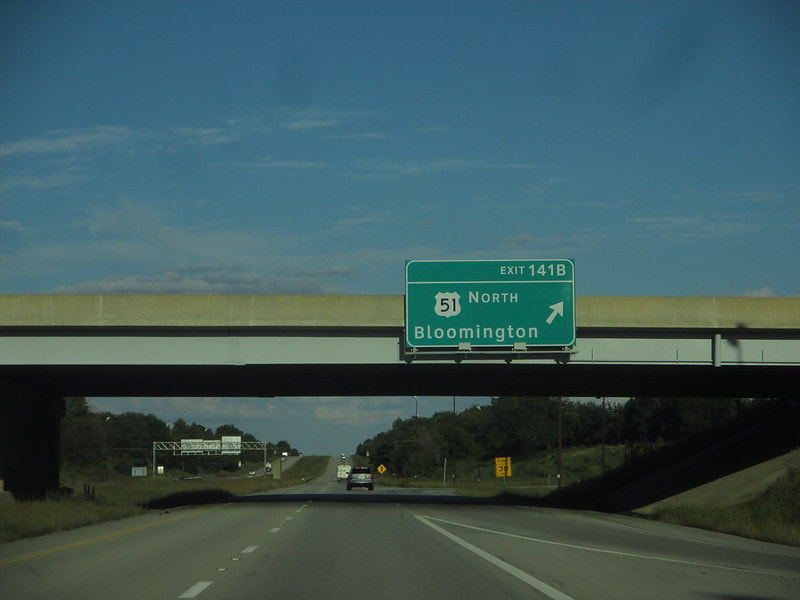 Exit 148 is a fountain interchange linking to Illinois 48, signed as a route to Oreana or Decatur: 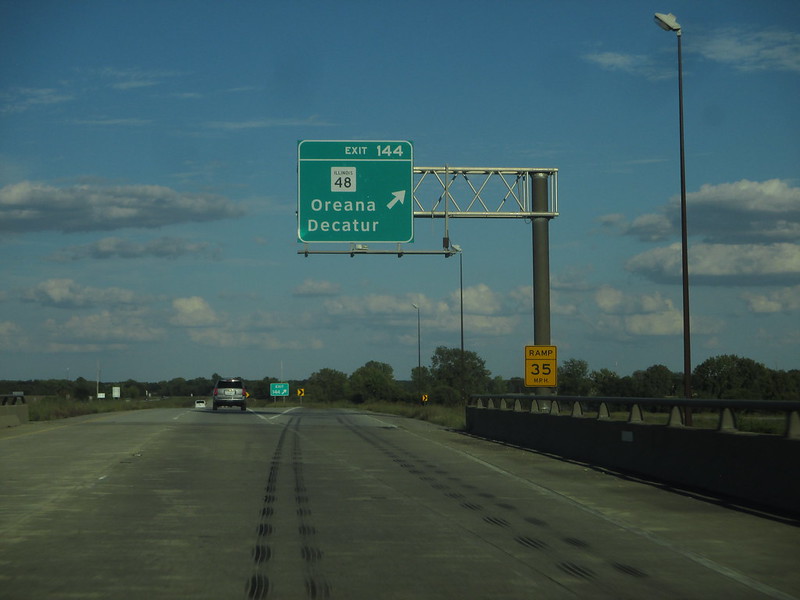 Exit 150 leads to a north-south road leading to the town of Argenta: 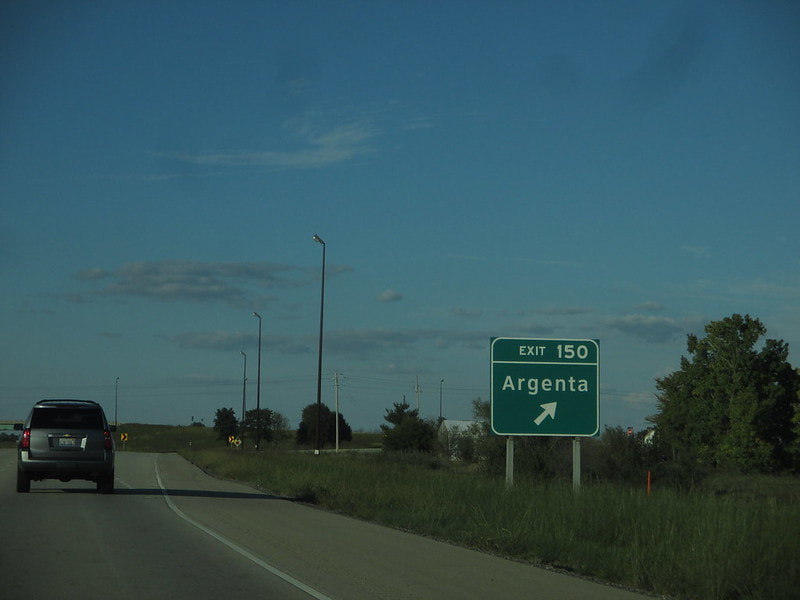 Exit 156 is another interchange for Illinois 48, this time signed as a way to reach Weldon and Cisco (Illinois 32, not mentioned on signage, begins just to the south of this interchange): 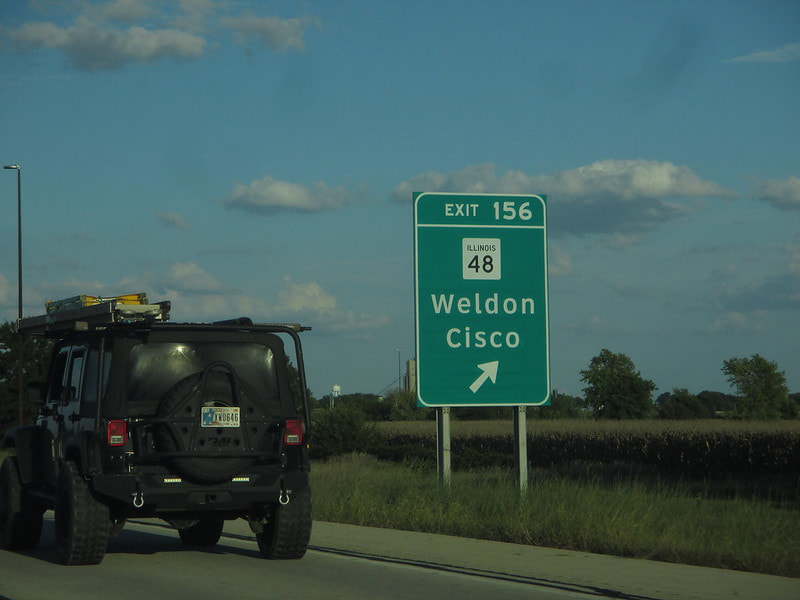 Exit 164 is the first of two interchanges leading to Monticello; this first one links with Bridge Street: 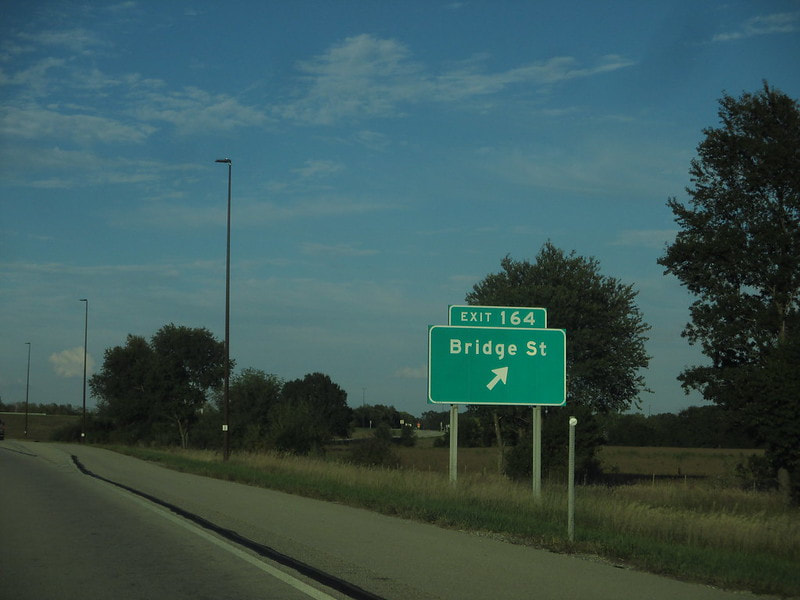 Exit 166 is for Illinois 105, known as Market Street, in Monticello: 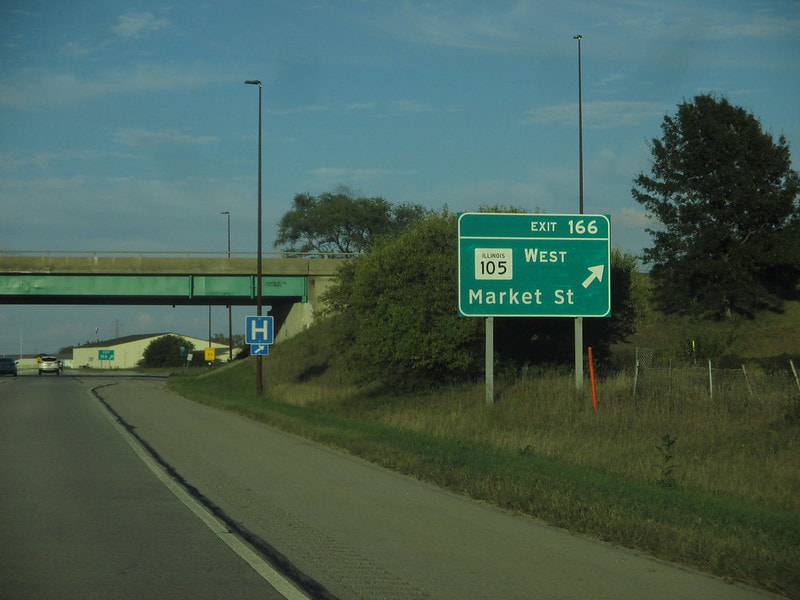 Exit 169 is a fountain interchange for White Heath Road, which predictably, leads to White Heath: 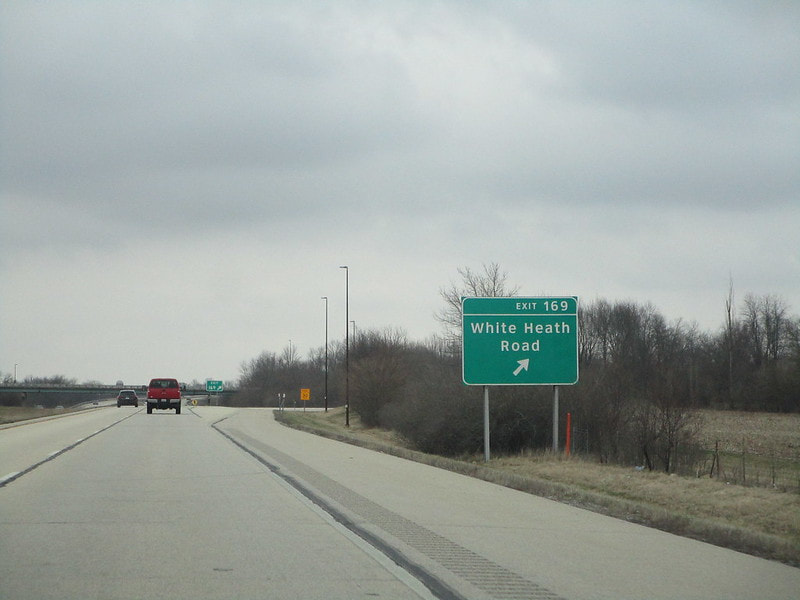 Exit 172 is for Illinois 10, which connects to Clinton (I'm not sure why no locales to the east are mentioned on signage): 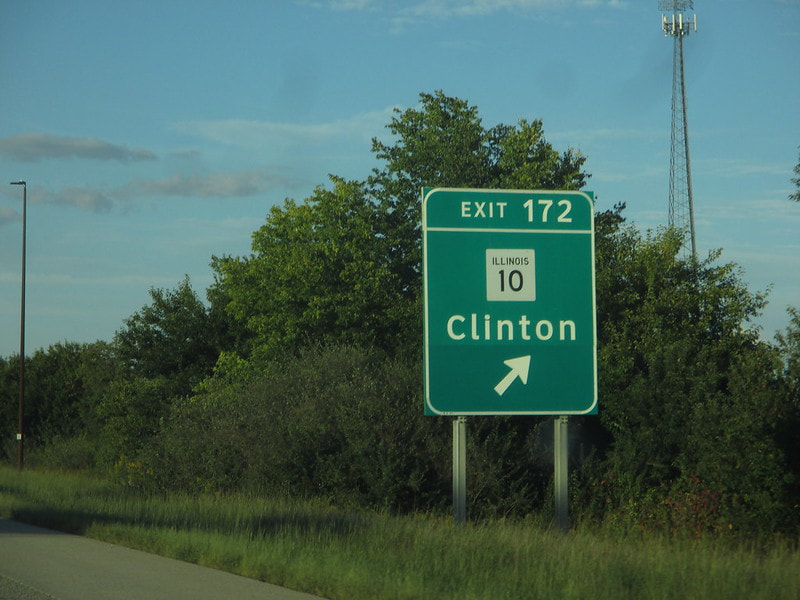 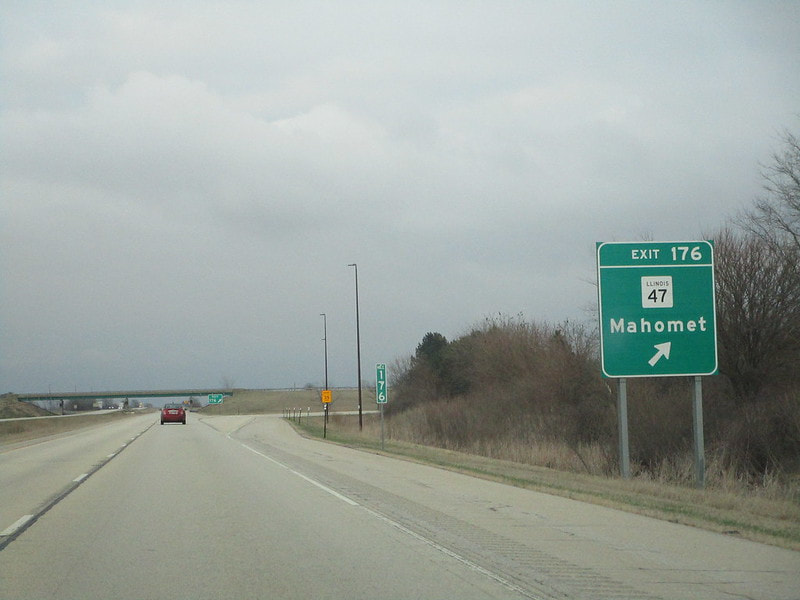