PAUL ACROSS AMERICA
US Route 150 is a diagonal northwest-southeast route from the Quad Cities southeast to eastern Kentucky.  It follows the Interstate 74 corridor throughout Illinois, before cutting south to Terre Haute and Vincennes in western Indiana.  From Vincennes, US Route 150 is concurrent with US Route 50 east to the town of Shoals, where it splits to do its own southeasterly thing, heading through Louisville to end at US Route 25 in Mount Vernon, Kentucky.  This eastern end at US Route 25 is very close to Interstate 75.  The northern end, by the way, sits at US Route 6 on the southern edge of Moline, just east of where US Route 6 diverges from the north-south bit of Interstate 74 that cuts across downtown Moline. 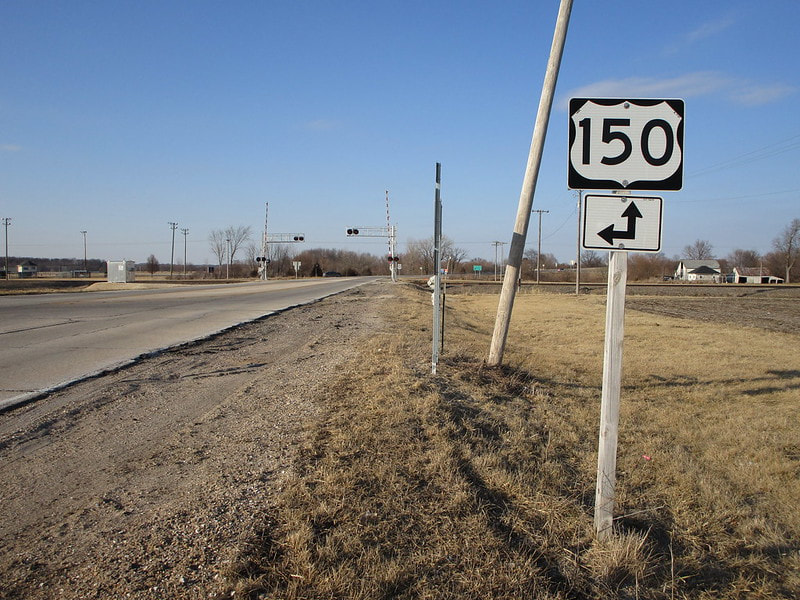 My photo of US Route 150 was taken near Galesburg, Illinois.  The guide assembly depicted faces south to traffic on Illinois Route 97 that is meeting that state highway's northern end.  An interchange with Interstate 74 sits in the background of this image, beyond the railroad crossing.  This comes from a trip in early March 2021, when I was clinching Illinois highways around downstate and western Illinois.  I had just finished driving the length of Illinois 97, when I happened upon this new-looking clean US Route 150 marker.  I had an older US Route 150 shield photo in my collection already, but I replaced that older photo with this one as the official entry for US Route 150.  When routesnapping, you can always replace an older photo with a nicer, newer one if you like it better than your original entry!
Back to the nationwide main page.
Back to the home page.