PAUL ACROSS AMERICA
US Route 27 runs from Fort Wayne, Indiana, south through Cincinnati, Kentucky, Tennessee, western Georgia and across the Florida peninsula.  The southern end is in Miami, Florida.  US Route 27 begins on the north side of Fort Wayne, at Interstate 69, and serves as one of only two marked surface highways through that city.  From there, US Route 27 continues south through easternmost Indiana, budging a little easterly into southwestern Ohio so it can move through Cincinnati.  US Route 27 crosses the Ohio River into Kentucky, where it initially parallels Interstate 75 to the east; however, US Route 27 crosses to the west side of Interstate 75 as both highways connect to Lexington, Kentucky.  US Route 27 remains the next major highway corridor west of Interstate 75 as it drops south into Tennessee, but both highways share a common goal once again, in that they both serve Chattanooga.  US Route 27 runs along the entire western edge of Georgia, including Columbus, before entering Florida.  US Route 27 carves somewhat of a southeasterly diagonal across the Florida peninsula, passing through Tallahassee, Perry, Ocala, and Sebring.  Ultimately, US Route 27 reaches its final stretch on the east-west 36th Street in Miami, and it ends at US Route 1. 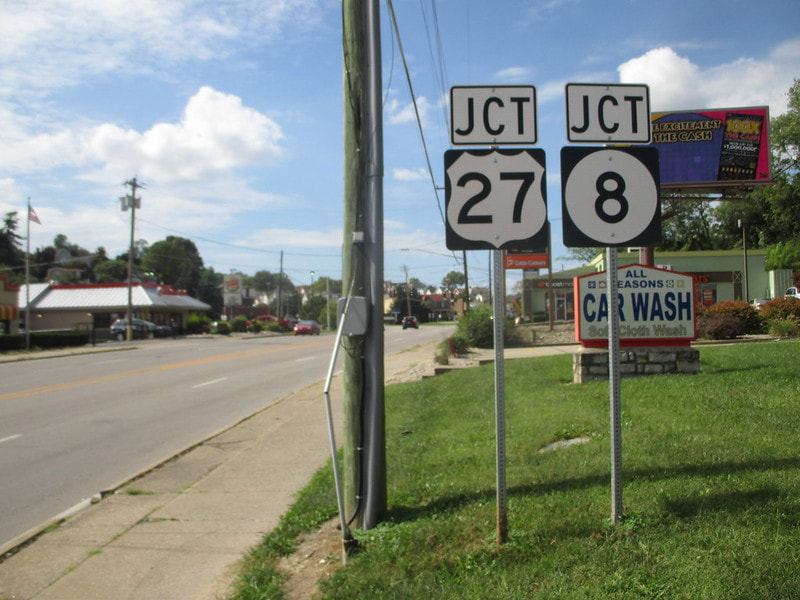 My photo for US Route 27 comes from Newport, Kentucky, just across the Ohio River from Cincinnati, Ohio.  I was stopping for lunch along a trip photographing route markers around southwestern Ohio--sometimes you have to gravitate toward an urban area for lunch to find good restaurants.  The junction markers in the picture face east along Kentucky Route 1892, a road connecting to one of the exits off of Interstate 471, just to the east.  I just happened to be greeted by some clean signage in a good lighting situation!  This trip around southwestern Ohio, plus the slight dip into Kentucky, took place in October 2018 (my US Route 127 photo was taken along the same trip).  Oddly, the junction marker on the right, mentioning Kentucky Route 8, is no longer standing in the field.
Back to the nationwide main page.
Back to the home page.