PAUL ACROSS AMERICA
Two separate highways in the United States are labeled as "US Route 2".  This page covers the iteration that lies farther east, in northern New England. For the other, more westerly US Route 2, from Washington state east to the Upper Midwest, click here.

The eastern US Route 2 runs from the northeastern corner of New York to the eastern border of Maine, passing through the northern parts of the northern New England states along the way.  The western end is at Rouses Point, New York, where travelers can turn north onto US Route 11 and promptly reach a Canadian border crossing.  From here, US Route 2's eastern opening immediately crosses into Vermont.  In particular, US Route 2 starts its journey across Vermont by crossing from north to south across the Grand Isle area.  After Grand Isle, US Route 2 reaches the Burlington area, where the route resumes its easterly motion.  US Route 2 cuts across northern Vermont and northern New Hampshire, passing through Waterbury, Montpelier, and St. Johnsbury in Vermont, plus Lancaster and Gorham in New Hampshire.  Beyond New Hampshire, US Route 2 zigzags with an overall easterly path through some of the northernmost populated areas of western Maine.  US Route 2 passes through Bangor, where Interstate 95 starts to follow alongside it toward the north-northeast.  At Houlton, US Route 2 gets slightly past US Route 1, but it doesn't get much farther, ending at Interstate 95 just shy of the border with New Brunswick. 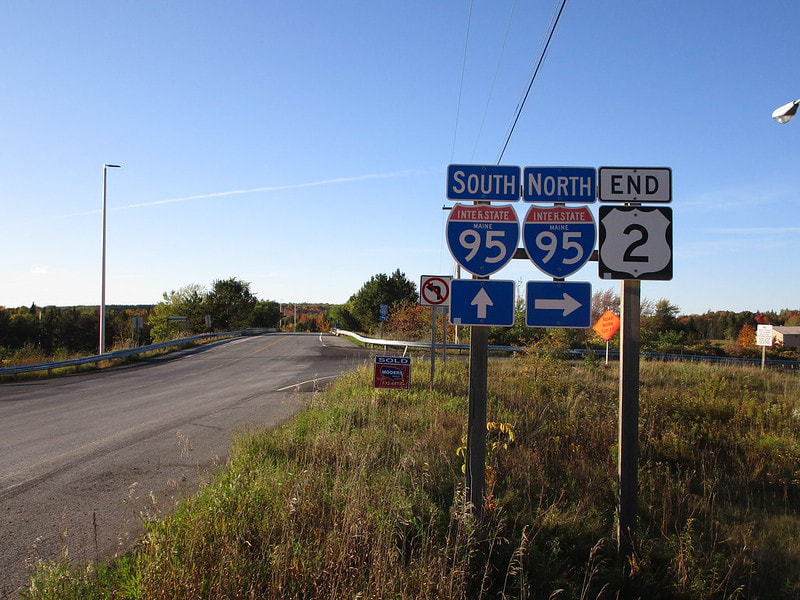 My photo for US Route 2's eastern iteration comes from the very eastern end of the eastern iteration. The eastern end marker is what I used for my shield image! The north-south border between Maine and New Brunswick lies less than a mile to the east of the site where this photo was taken.  The signage depicted faces south, on the south side of an interchange.  Strangely, the odd-numbered Interstate 95 runs east-west here, and the even-numbered US Route 2 is heading northbound, coming to an end at this interchange.  This photo from the east end of Houlton, Maine, came from a September 2019 trip to eastern Canada and Maine.
Back to the nationwide main page.
Back to the home page.