Exits and mile markers are numbered in increasing order from west to east; this scheme is customary for all American east-west highways. Most exits along the Indiana Toll Road, the conduit for Interstate 90 in Indiana, are trumpet spurs with toll booths on them.

The first exit from Interstate 90 in Indiana is labeled "Exit 0", as it sits right on the Illinois-Indiana border.  Eastbound travelers see "Exit 107", since the eastbound offramp is still in Illinois.  Onramps and offramps are provided for both directions along Interstate 90, making it a complete interchange to US Routes 12, 20, and 41 along Indianapolis Boulevard...
Exit 3 only provides access to/from the west on Interstate 90, and it leads to the northwestern beginning of Indiana Route 912, also known as the Cline Avenue expressway...
Exit 5 leads to US Route 41, which now runs along Calumet Avenue...
Exit 10 is for a spur to Indiana Route 912, which now runs north-south in Gary along Cline Avenue: 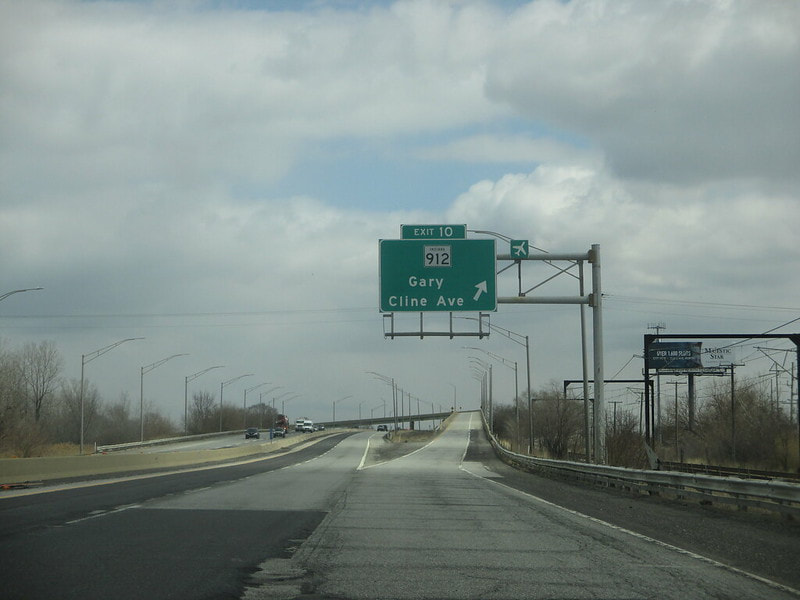 Exit 14A is a trumpet spur to Buchanan Street, but its signed as the way to Grant Street, a more important thoroughfare in Gary: 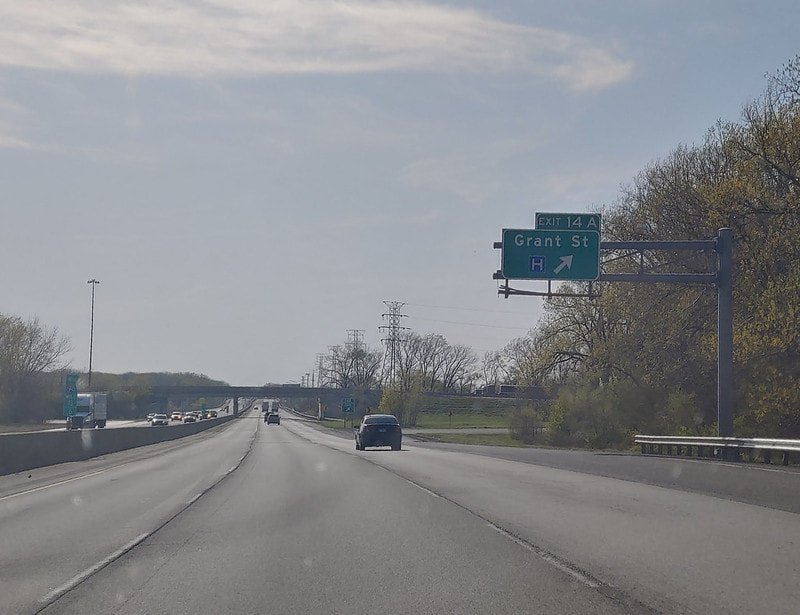 Exit 14B is a diamond interchange to Broadway, a street in Gary that carries Indiana Route 53: 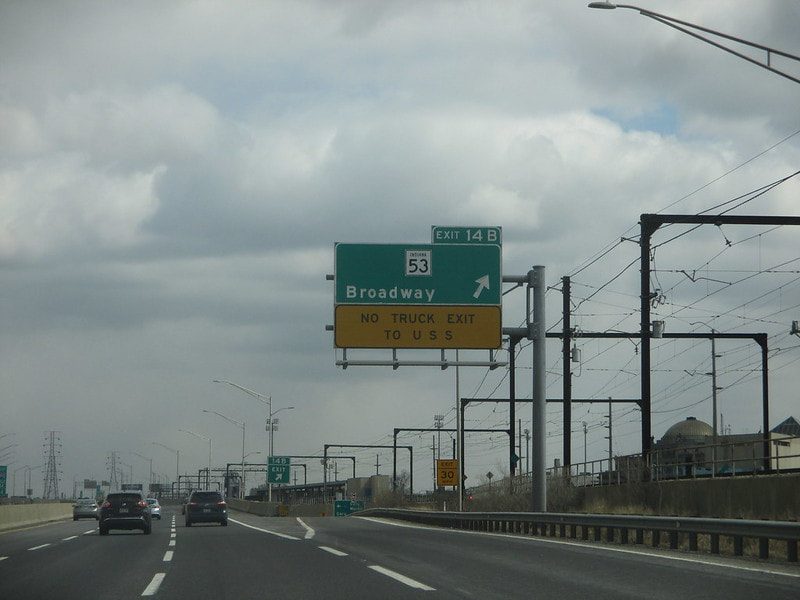 Exit 17 is a trumpet spur to the northern end of Interstate 65, and to the surface highway carrying US Routes 12 and 20: 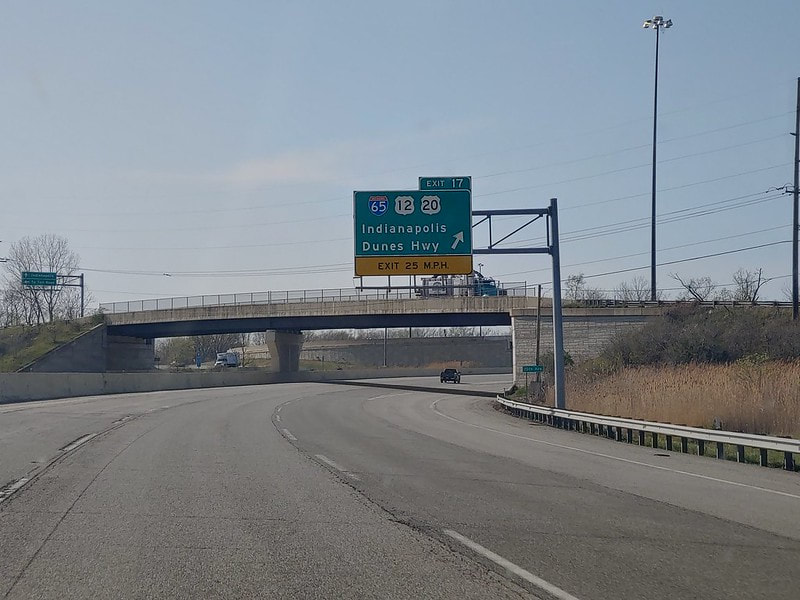 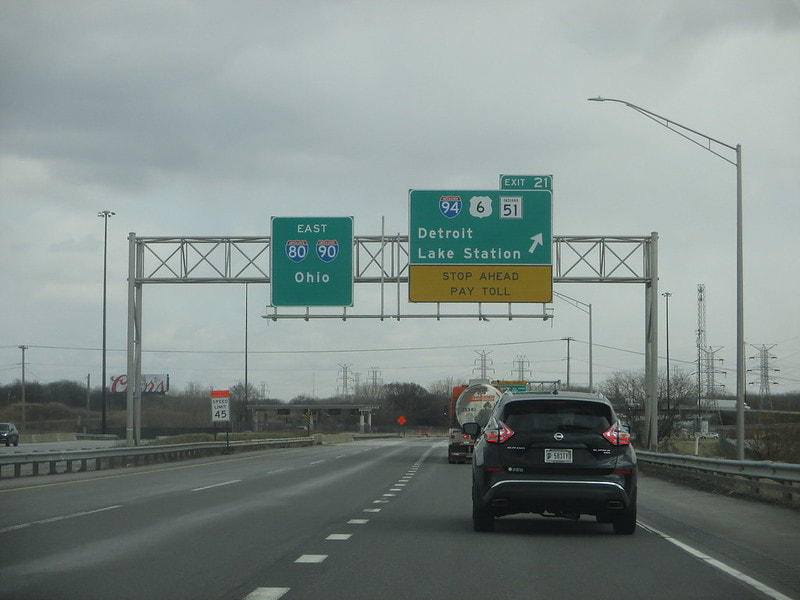 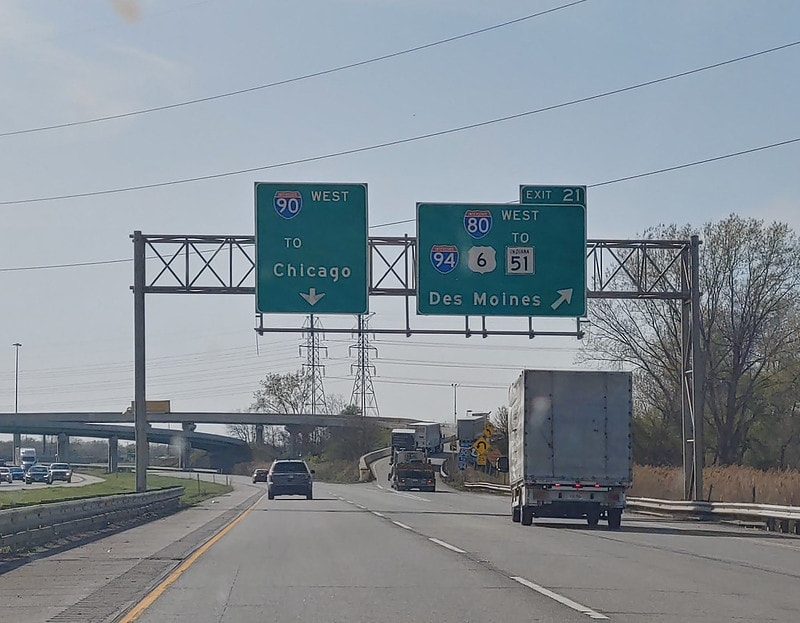 Exit 23 is just signed as the way to Portage, but it's also the way to the southern extent of Indiana Route 249...
Exit 31 is for Indiana Route 49, providing access to Chesterton and Valparaiso: 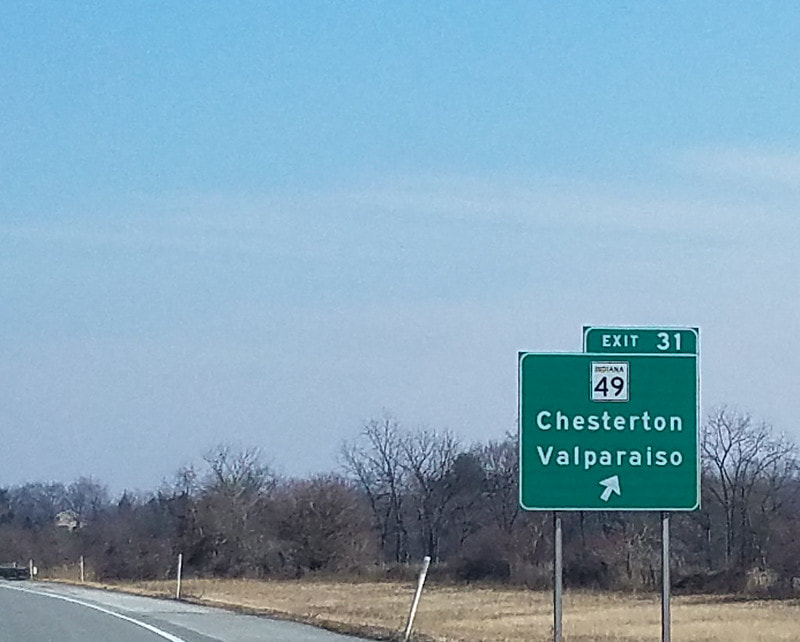 Exit 39 is for US Route 421, which connects to Michigan City and Westville: 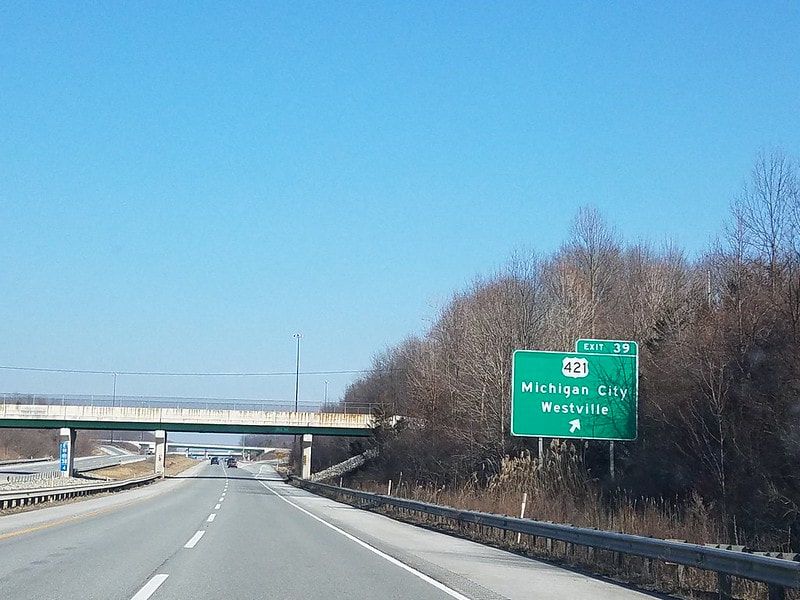 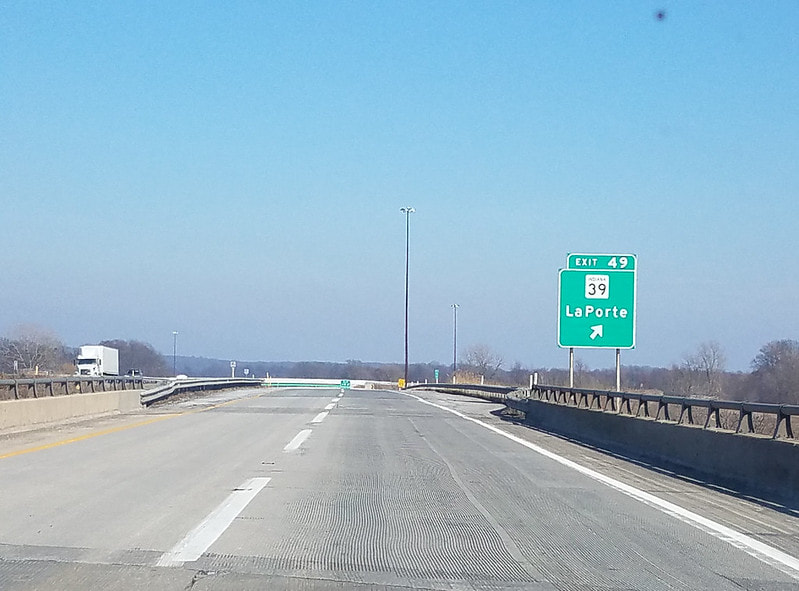 Exit 72 ends a 23-mile drought of exits, leading to US Route 31's freeway bypass around the west side of South Bend; this exit is signed as a way to South Bend, Plymouth, and Niles (in Michigan): 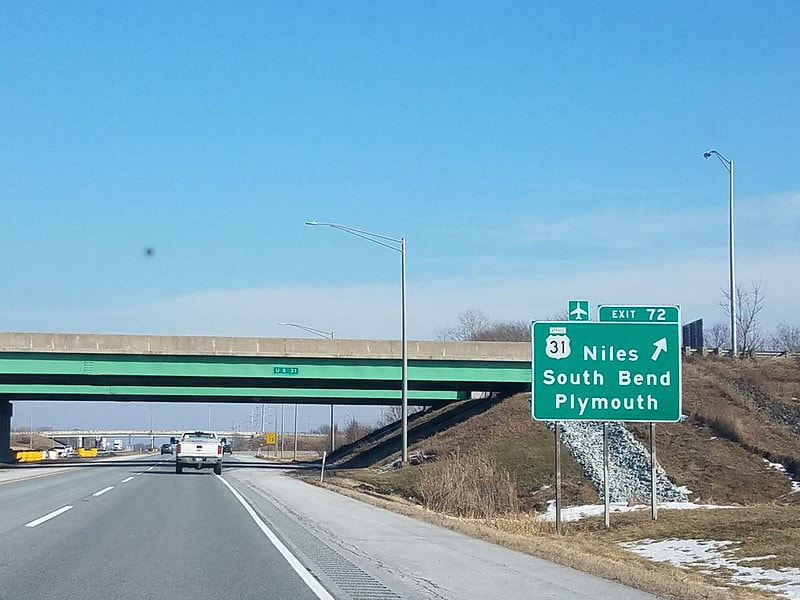 Exit 77 is for Indiana State Route 933 and the Business alignment of US Route 31 in South Bend: 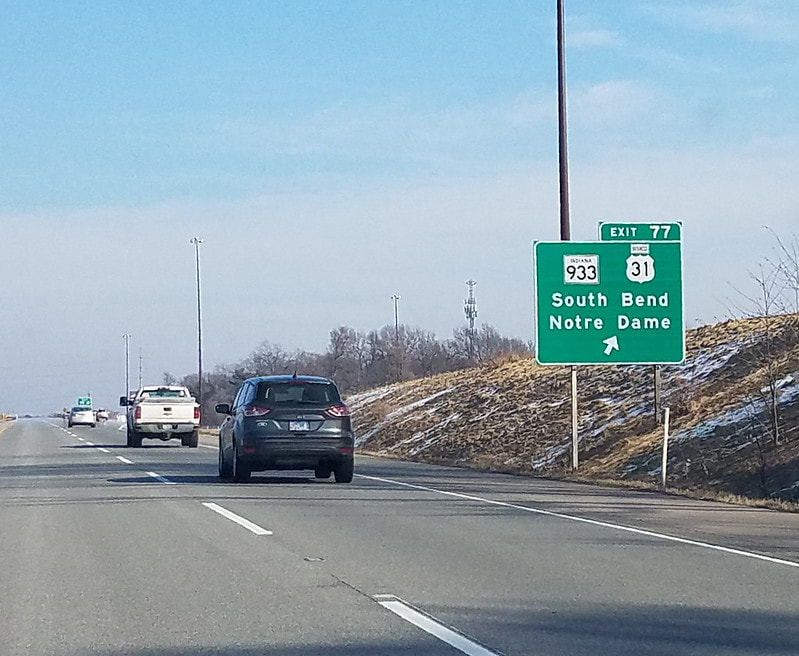 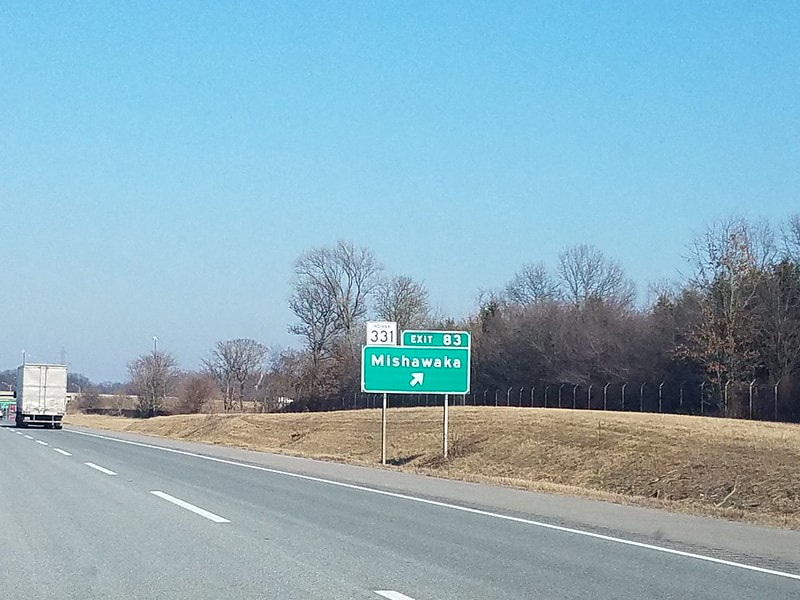 Exit 92 is for Indiana Route 19, which leads into Elkhart: 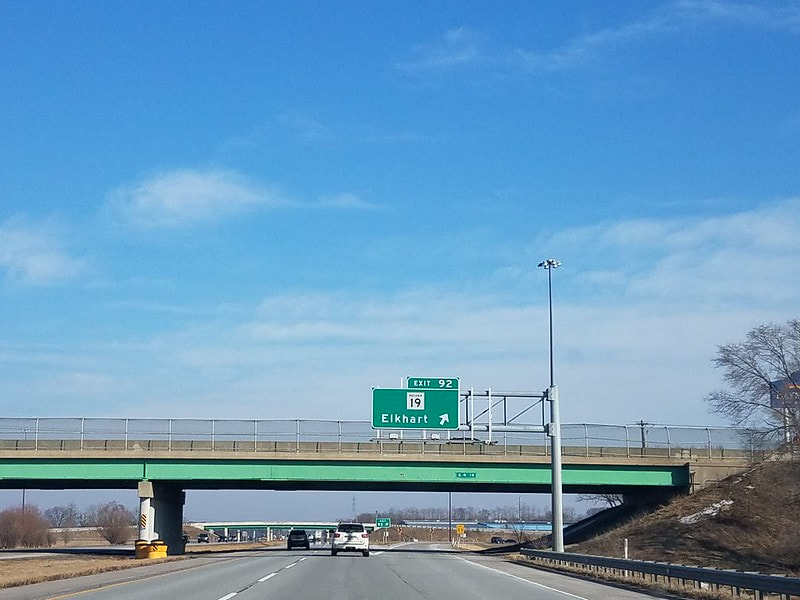 Exit 96 is the "Elkhart East exit", connecting to County Route 17, which used to be part of Indiana State Route 17.  The county road becomes Michigan Route 217 at the state border just a mile to the north, and this is reflected on the exit signage: 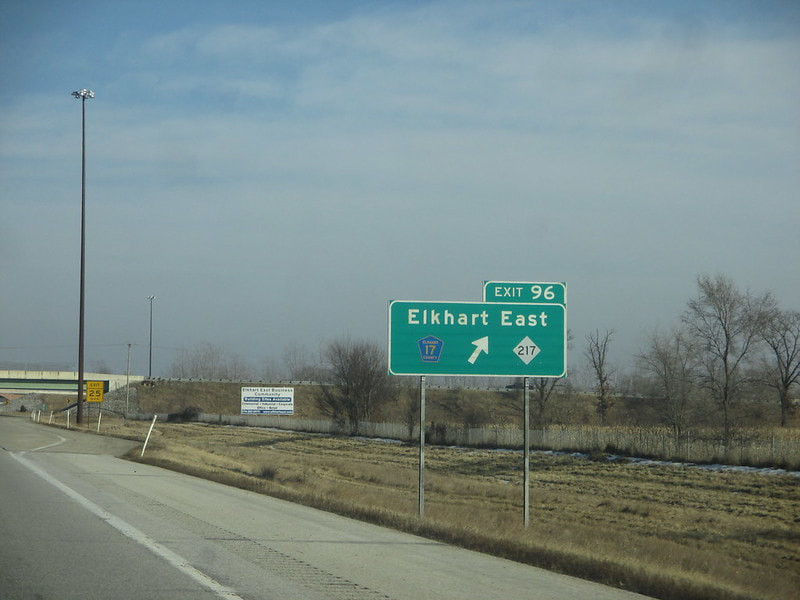 Exit 101 is a trumpet spur, like most of the other exits along the Indiana Toll Road, linking to Indiana Route 15, Bristol, and Goshen: 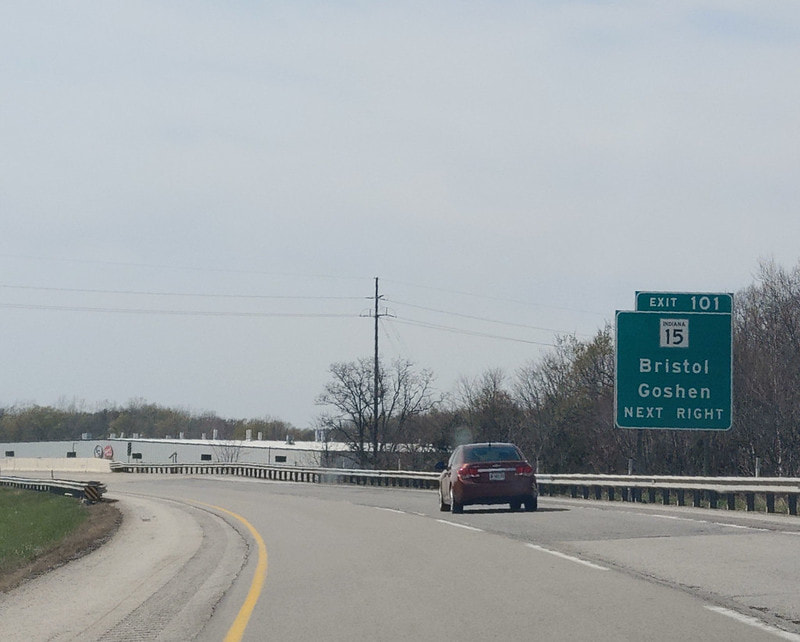 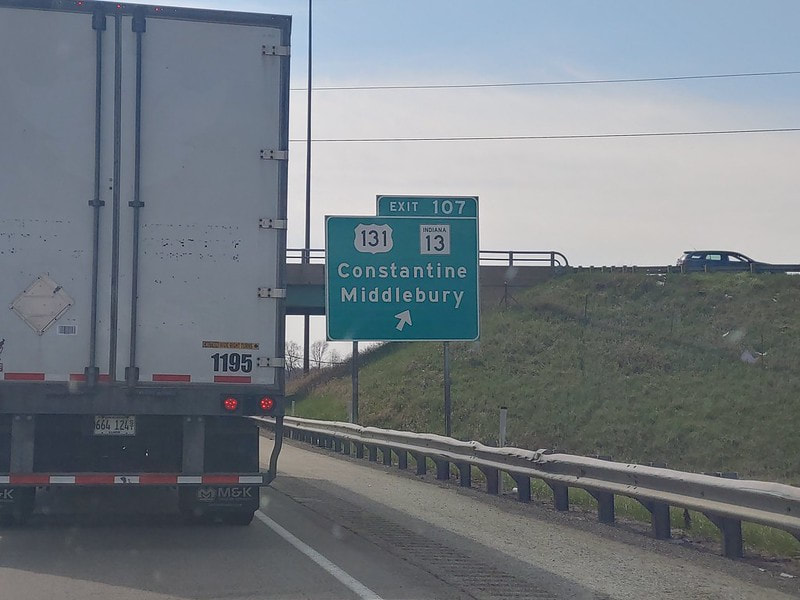 Exit 121 is for Indiana Route 9, signed as the way to Howe and Lagrange in Indiana (though the sizeable town of Sturgis, Michigan, is only a couple of miles north of here)...
Exit 144 appears after another 23-mile drought, and it leads to Interstate 69, a freeway helping travelers to access Lansing, Michigan, and Fort Wayne. A side ramp splits from the offramp here, allowing access to Indiana Route 120, Indiana Route 127, Orland, and Fremont: 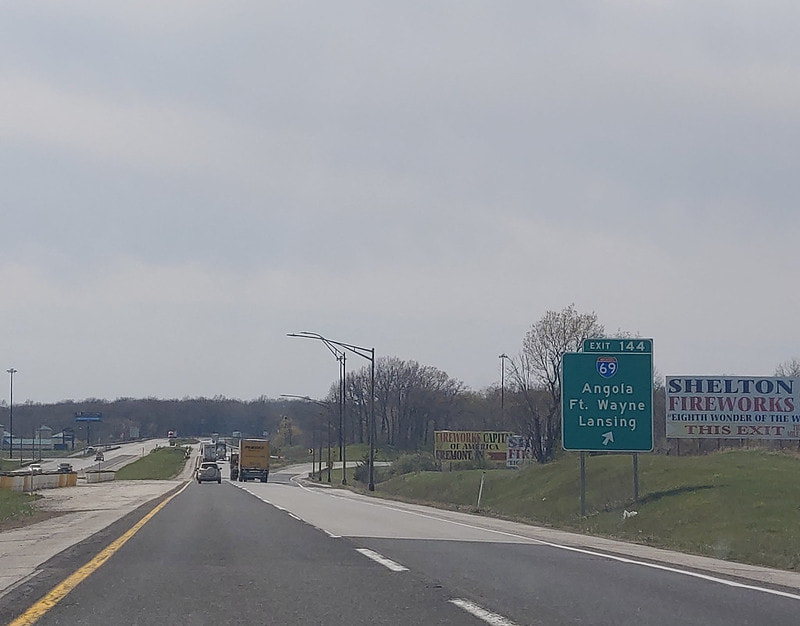 Interstate 90, with Interstate 80 along for the ride, continues east into the state of Ohio after 157 miles in Indiana.  The eastern continuation in Ohio is also tolled, and it's known as the Ohio Turnpike...
Back to the Indiana main page.
Back to the home page.