PAUL ACROSS AMERICA
US Route 72 runs from Memphis to Chattanooga, which are both cities in Tennessee, but it does so in a way that dips south into the northernmost reaches of Mississippi and Alabama. The western end is difficult to pinpoint, because Tennessee is notoriously terrible at signing its US and state routes.  I believe the western end is where Bellevue Boulevard meets Union Avenue in Memphis, Tennessee, where US Route 51 joins US Routes 64, 70, and 79 east and north.  US Route 72 is a fifth route added to the mix, until it turns to run independently on Poplar Avenue.  US Route 72 heads southeast through Collierville to run through extreme northern Mississippi, including the town of Corinth.  US Route 72 continues east through Muscle Shoals, Florence, Athens, and Huntsville in Alabama, loosely following the Tennessee River. The last stretch of US Route 72 cuts northeasterly, still following the Tennessee River, into the Chattanooga area. US Route 72 ends at the corner of Broad and Main Streets in Chattanooga, an intersection also home to the western end of US Route 76.  US Routes 11, 41, and 64 all make their way through this intersection, concurrent with the final few blocks of US Route 72. 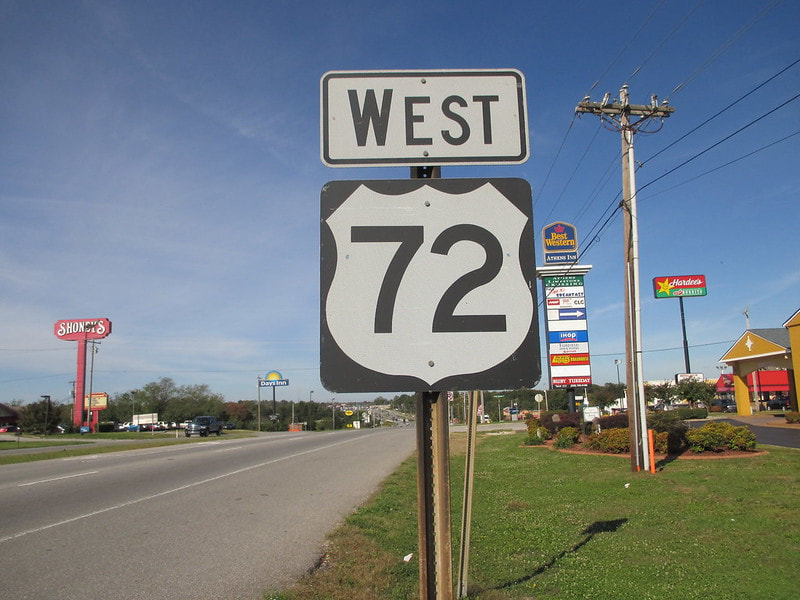 My photo for US Route 72 comes from Athens, Alabama. The trailblazer shown in the photo reassures travelers coming from the Interstate 65 interchange. The photo was taken in October 2014 as I was making my way south to the Gulf Coast for the first time (I have taken three trips to the Gulf Coast so far).  US Route 72's main alignment, shown in this photo, follows the north side of the Tennessee River valley in Alabama, but it also has an alternate alignment along the south side of the river.  These two separate alignments exist between Muscle Shoals and Huntsville.  The eastern portion of alternate US Route 72 is concurrent with Interstate 565.
Back to the nationwide main page.
Back to the home page.