​In Iowa, Interstate 74 only has a short north-south stint in the Quad Cities.  While it's true that Interstate 74 has an even number, indicating an east-west pathing, the highway's westernmost ending consists of a north-south piece in Iowa.  That north-south piece in Iowa begins at Interstate 80 and heads south to cross the Mississippi River.  Interstate 74's bridge in Iowa was recently reconstructed, requiring a construction process that took several years.  But it's open and successfully facilitating traffic between the heart of Bettendorf, Iowa, and the heart of Moline, Illinois.  The southern half of Interstate 74's four-mile length in Iowa also carries US Route 6; as both routes try to proceed easterly into Illinois, they must jog southward here to get across the westerly-flowing Mississippi River.

First of all, though, here is the photo showing where I got my shield image for Interstate 74.  The sign assembly shown below gave me that shield image (the one you see on the menu page), and it comes from the interchange along Interstate 74 where US Route 6 joins the freeway southward.  The interchange is marked as "exit 2", to Kimberly Road and Spruce Hills Drive.  The aperture faces west, positioned just east of the interchange, and the signs in the shot show westbound travelers their options at the upcoming interchange. Technically, the ramp to Interstate 74 west will lead a car north, but that ramp is coming up first, requiring a right turn.  Staying straight onto Kimberly Road will but travelers reading this sign on US Route 6 west.  Making the second left leads to Interstate 74 south (and US Route 6 east), but that just involves going straight through the first intersection, for now.  This photo was taken in February 2016, along a journey west to Omaha. 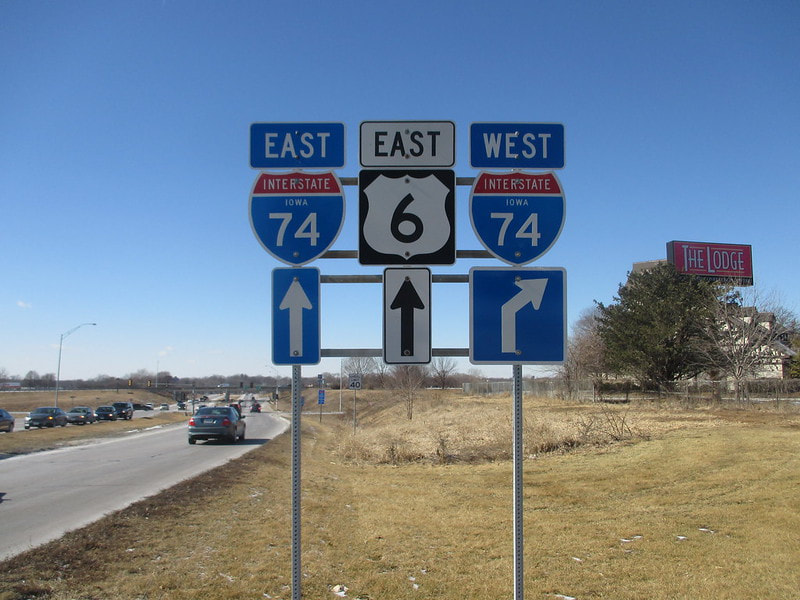