Interstate 74 in Illinois runs from the Quad Cities southeasterly across central Illinois toward Indianapolis, leaving Illinois into Indiana near Danville.  It closely follows the route of US Route 150 throughout its length Illinois, except for the few miles against each state border.  The northwestern end of the somewhat diagonal Interstate 74 occurs about 5 to 6 miles north of the Mississippi River bridge, in Davenport, Iowa. From Davenport, Interstate 74 heads south across the Mississippi River into Moline, carrying US Route 6 along for the ride. Interstate 74 in Illinois runs from the Quad Cities south to Galesburg, then southeasterly through Peoria, Bloomington-Normal, Champaign-Urbana, and Danville, to leave Illinois across the eastern border into Indiana, toward Indianapolis.

Exit numbers are listed in increasing order from west to east, or northwest to southeast in actuality.

Interstate 74 enters Illinois crossing the Mississippi out of Davenport, Iowa, south into Moline, Illinois:
Exit 2 is a ramp down to downtown Moline, connecting with 7th Avenue and Illinois 92:
Exit 3 is for Avenue of the Cities:
Exit 4A is to Illinois 5 westbound, and Illinois 5 is also known as John Deere Road:
Exit 4B is to Illinois 5/John Deere Road eastbound:
Exit 5A is part of a cloverleaf interchange, with the first ramp leading to Interstate 280 west, toward Des Moines:
Exit 5B leads south, as Interstate 74 joins Interstate 280 east, toward Peoria and Chicago. Exit 5B leads to US Route 6 east and the Quad City Airport:
The next exit is a cloverleaf interchange where Interstate 280 ends, and where Interstate 74 and Interstate 80 ricochet off of each other.  Interstate 74 turns from the western leg of the junction to the southern leg, and Interstate 80 turns from the northern leg to the eastern leg of the junction.  Exits are not numbered at this cloverleaf, but the junction occurs at about mile marker 14 along Interstate 74.  The first exit ramp (we'll call it "14A") leads to Interstate 80 west (or north) toward Davenport:
The second exit ramp leads to Interstate 80 east, toward Chicago (we'll call this ramp "14B"):
Interstate 74 is now heading south, independently from any other route, toward Galesburg.  The next exit is exit 24, accessing Illinois 81, a route that runs to Kewanee and Cambridge:
Exit 32 is a fountain interchange to Illinois 17, providing access to Woodhull and Alpha:
Exit 46A is the first half of a cloverleaf interchange in the Galesburg area; this first ramp links to US Route 34 west, toward Monmouth: 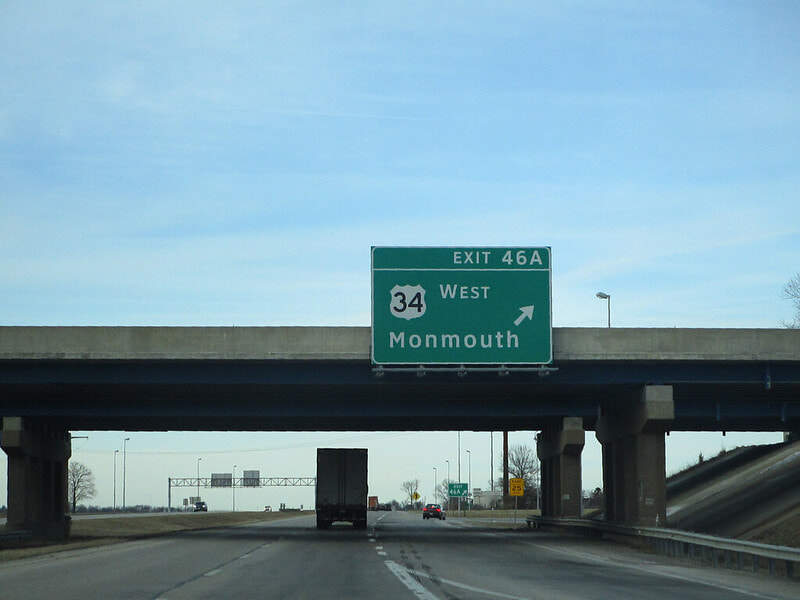 Exit 46B, the second ramp in the cloverleaf, reaches US Route 34 east, toward Kewanee: 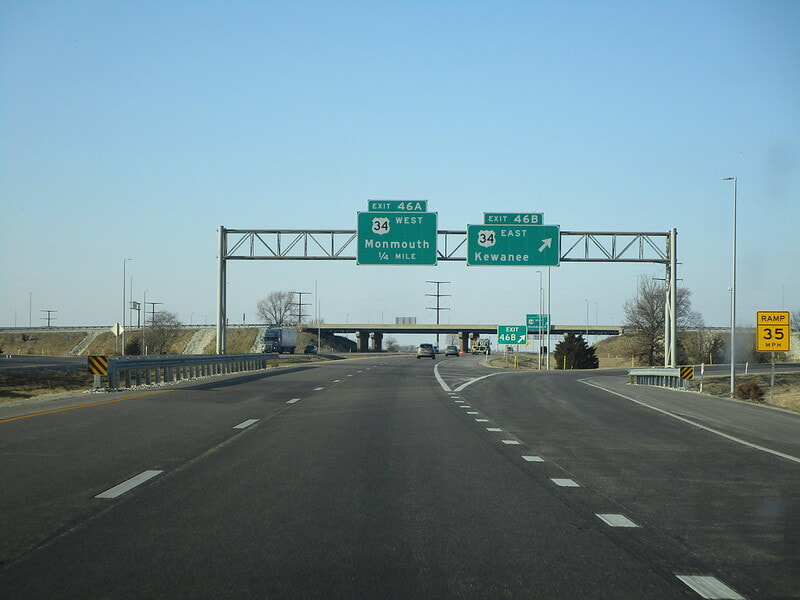 Exit 48A is the first half of a partial cloverleaf to a surface road connecting to Galesburg and East Galesburg: 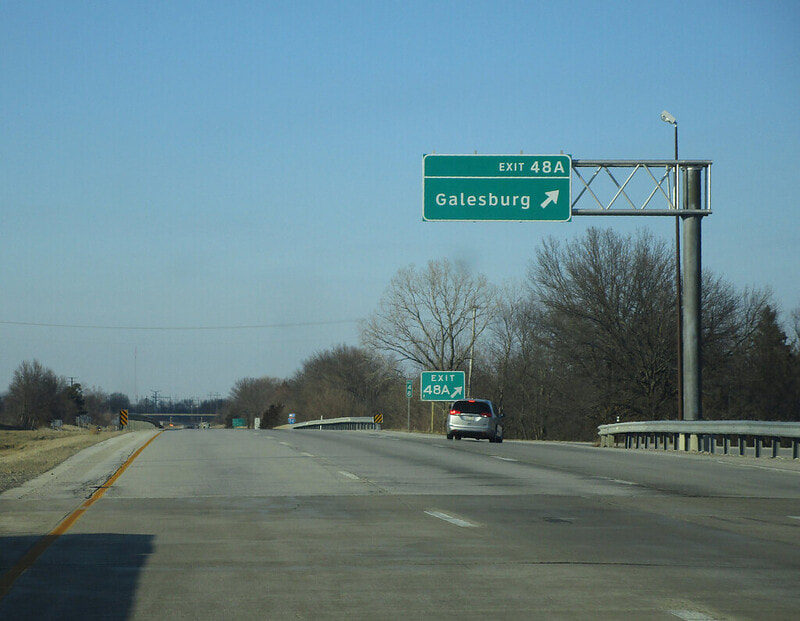 Exit 48B is the second half of the cloverleaf, pointing drivers eastward into East Galesburg (southbound Interstate 74 has only one exit to this surface road, instead of two): 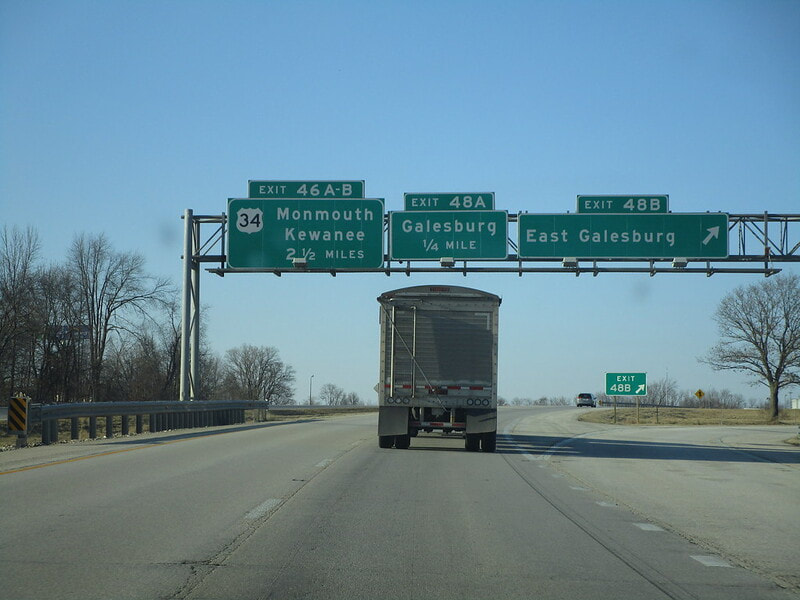 Exit 51, occurring as Interstate 74 bends more east-southeasterly toward Peoria, is to a local road leading to Knoxville: 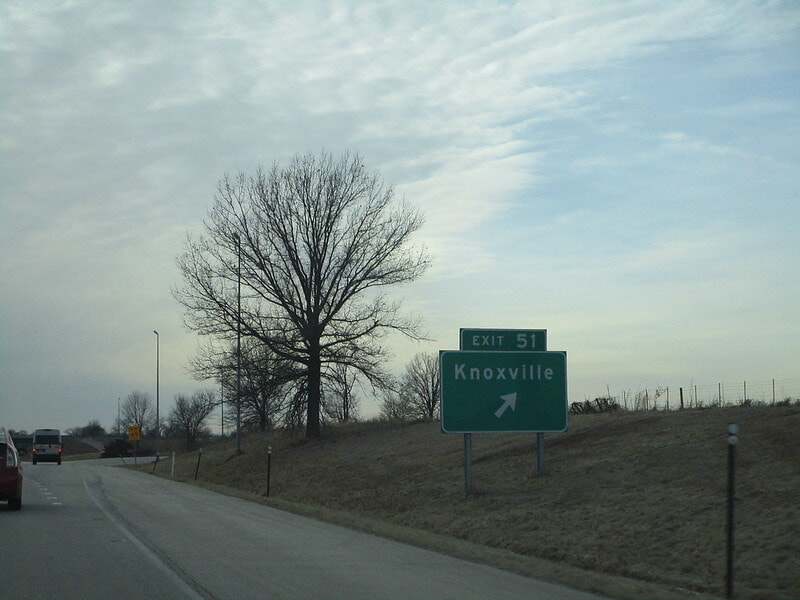 Exit 54 is a half-folded diamond interchange to US Route 150, and the northern beginning of Illinois 97, which leads south toward Lewistown: 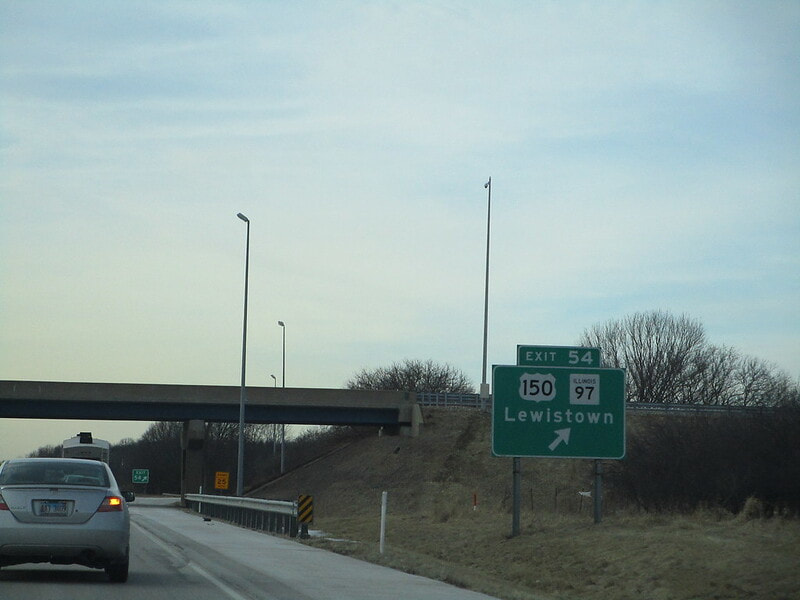 Exit 71 is to a road that indirectly connects to Illinois 78, which runs toward Canton or Kewanee... 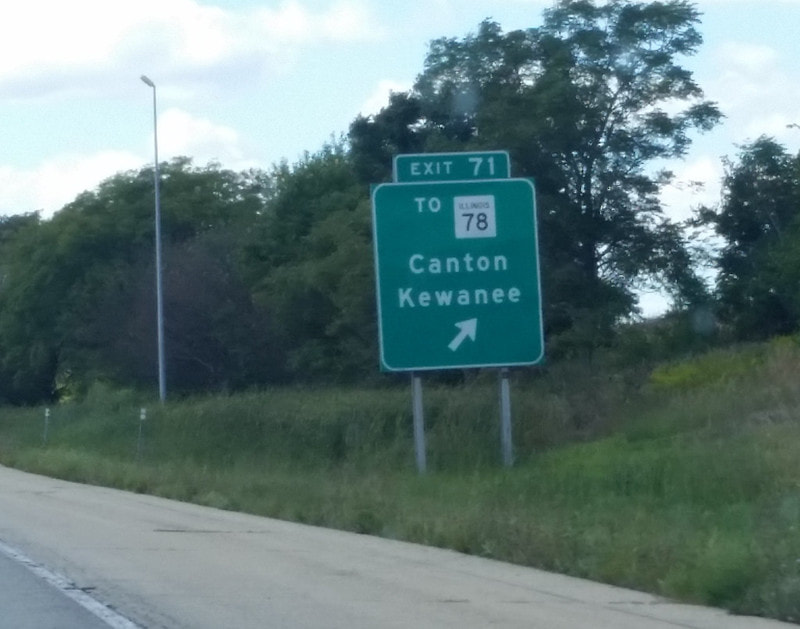 Exit 75 is to a road that can get travelers to Brimfield and Oak Hill: 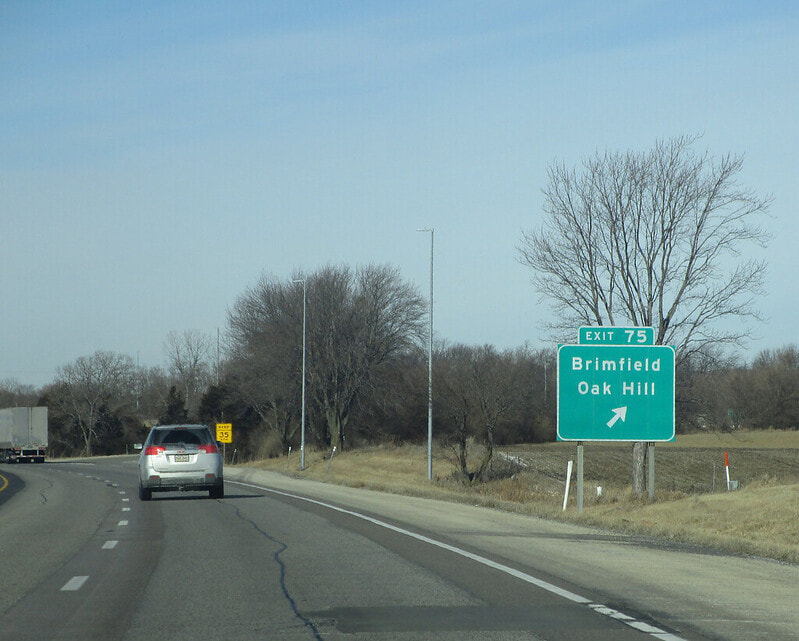 Exit 82 is to Kickapoo-Edwards Road: 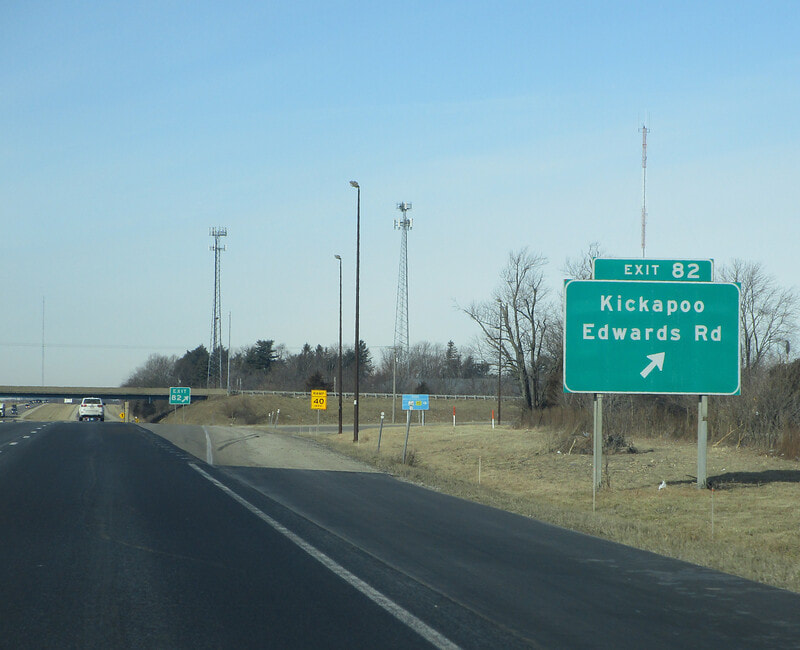 Exit 87A leads to Interstate 474, which wraps around the south side of Peoria; Indianapolis is shown as a control city: 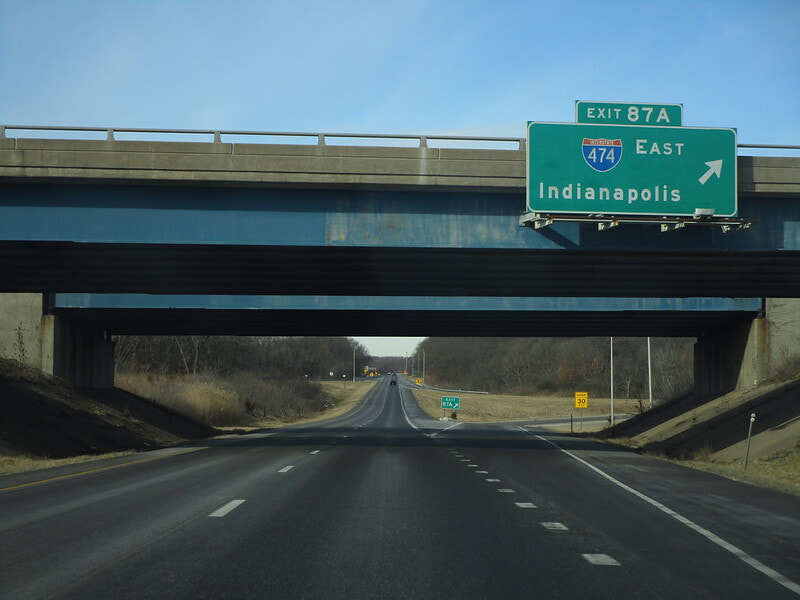 Exit 87B is for Illinois 6, a northern continuation of the Interstate 474 freeway, stretching up toward Chillicothe: 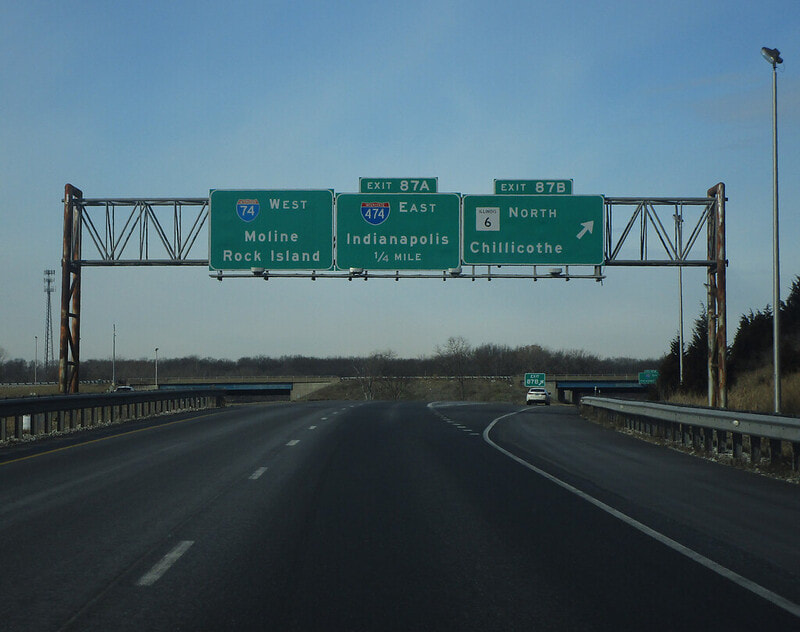 Exit 88 is for Sterling Avenue in Peoria: 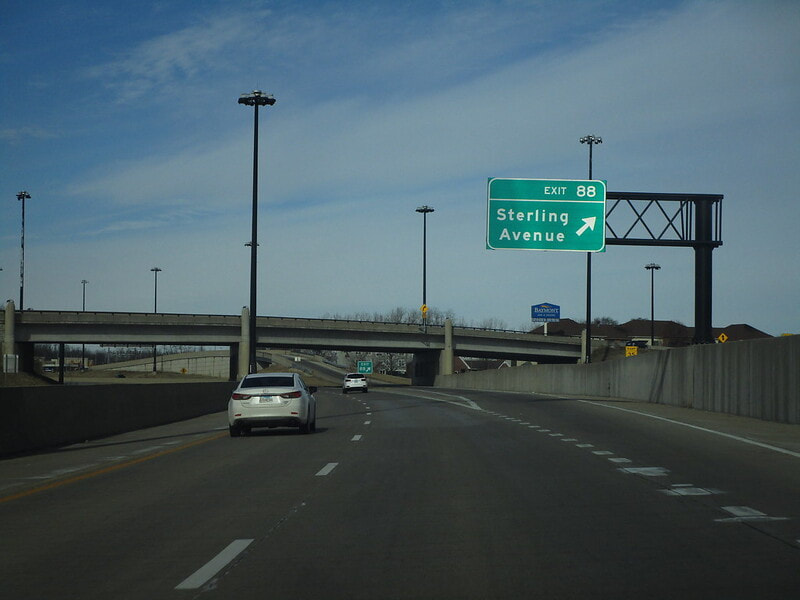 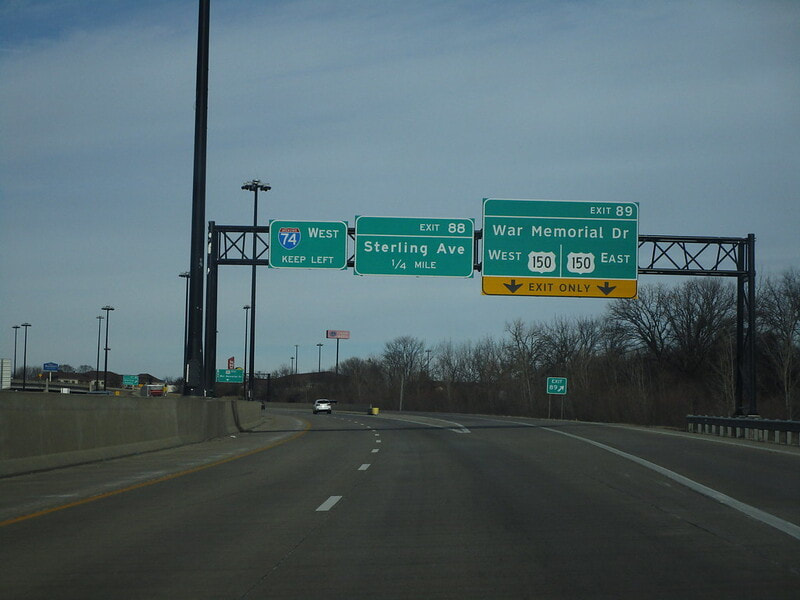 Exit 90 is to Gale Avenue in Peoria: 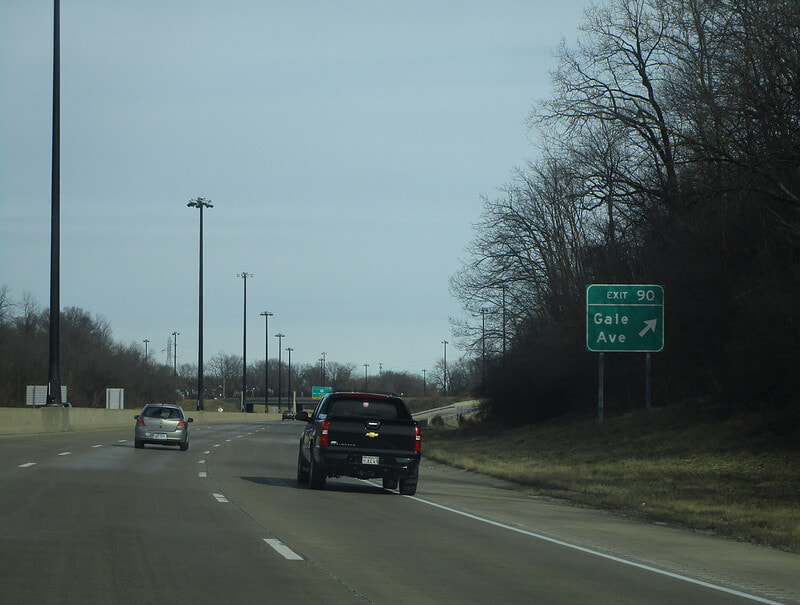 Exit 91 is to University Street in Peoria: 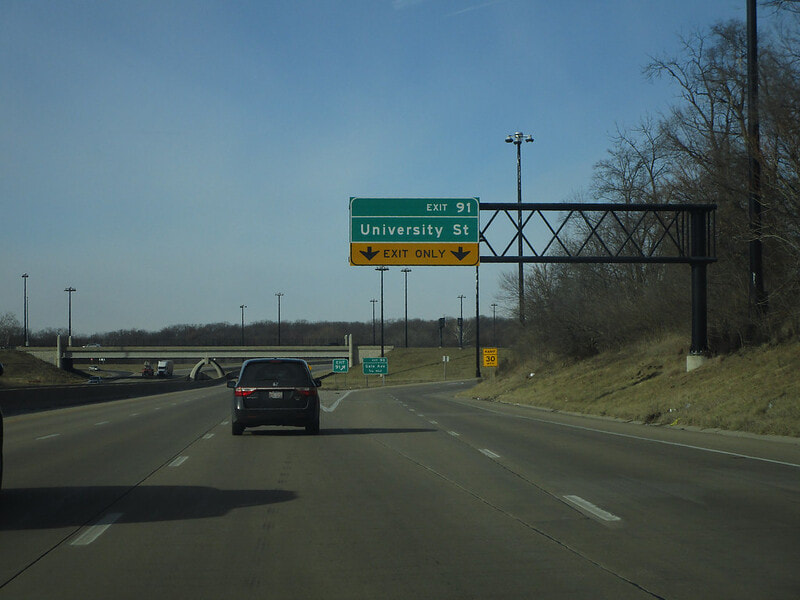 Exit 92A is to Illinois 40 north, which follows Knoxville Avenue: 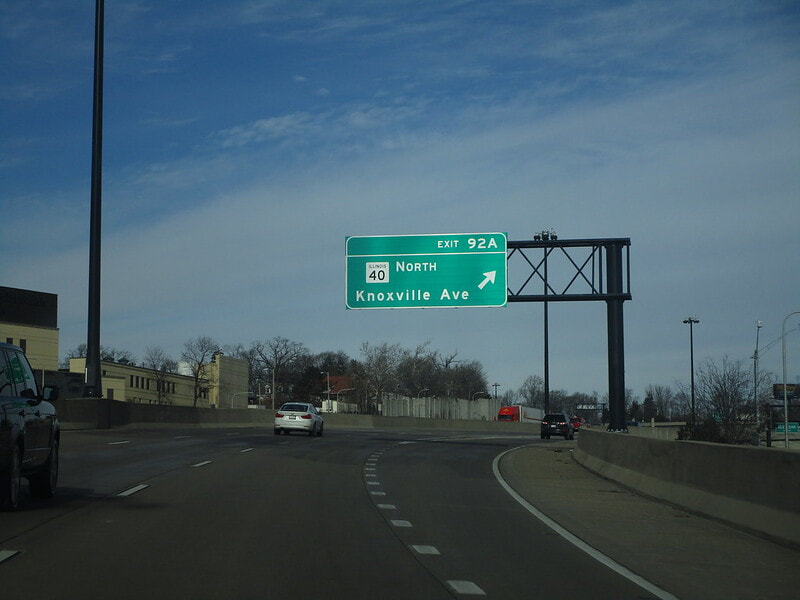 Exit 92B is to Illinois 40 south, which follows Glen Oak Avenue: 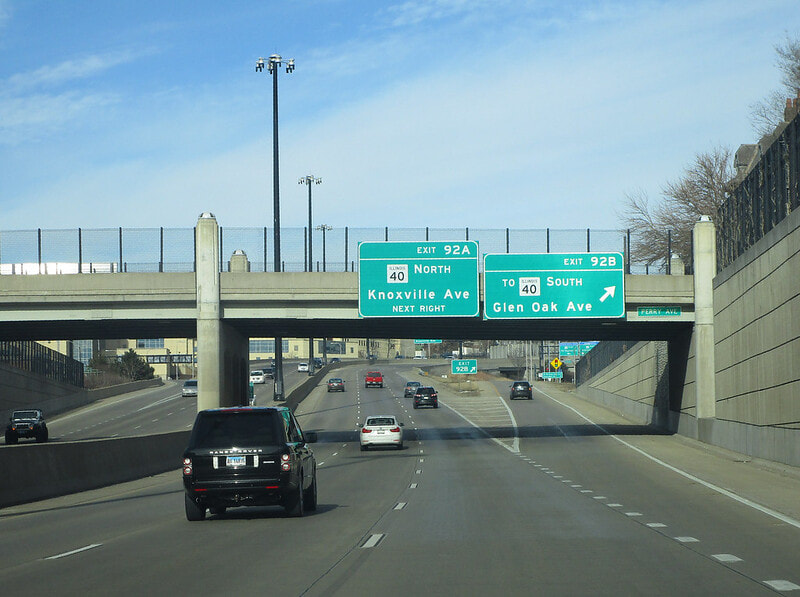 Exit 93 is for Washington Street or Adams Street in downtown Peoria, linking to Illinois 29 north; at this point, Illinois 29 joins Interstate 74 from the north...
Exit 94, in East Peoria on the east side of the Illinois River, is a trumpet interchange to Riverfront Drive and the southern beginning of Illinois 40 north: 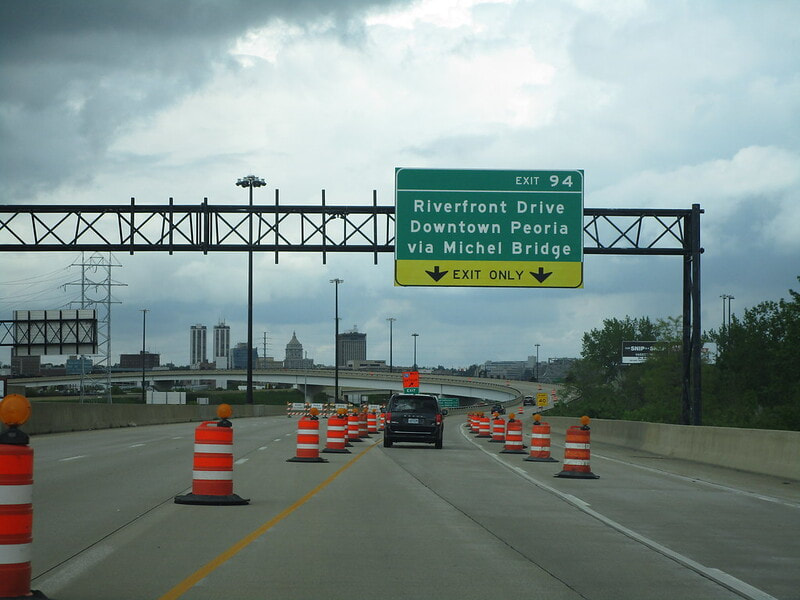 Exit 95A leads to a cluster of routes in East Peoria: US Route 24, US Route 150, Illinois 116, and the southern continuation of Illinois 29 (the exit is listed as 95 westbound, since westbound doesn't have access to exit 95B): 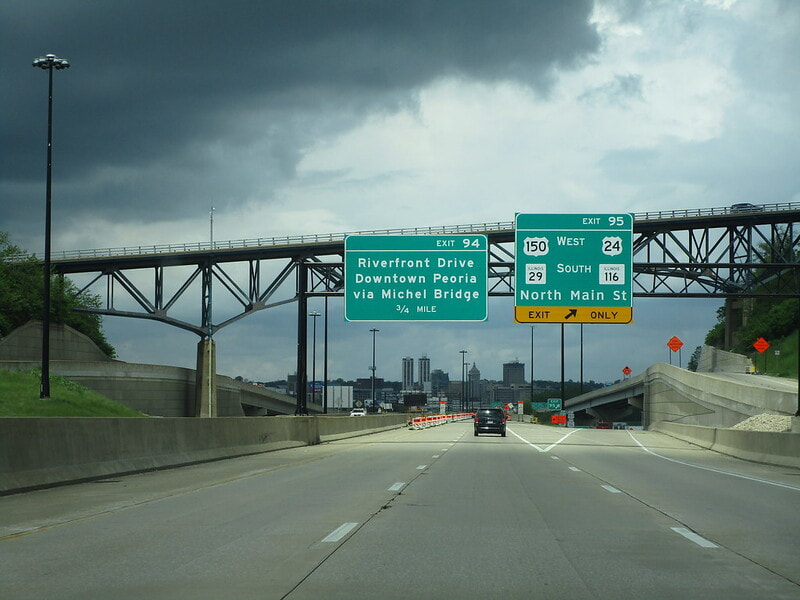 Exit 95B, only accessible from eastbound Interstate 74, transfers to US Route 150 and Illinois 8 east, also known as eastbound on Camp Street: 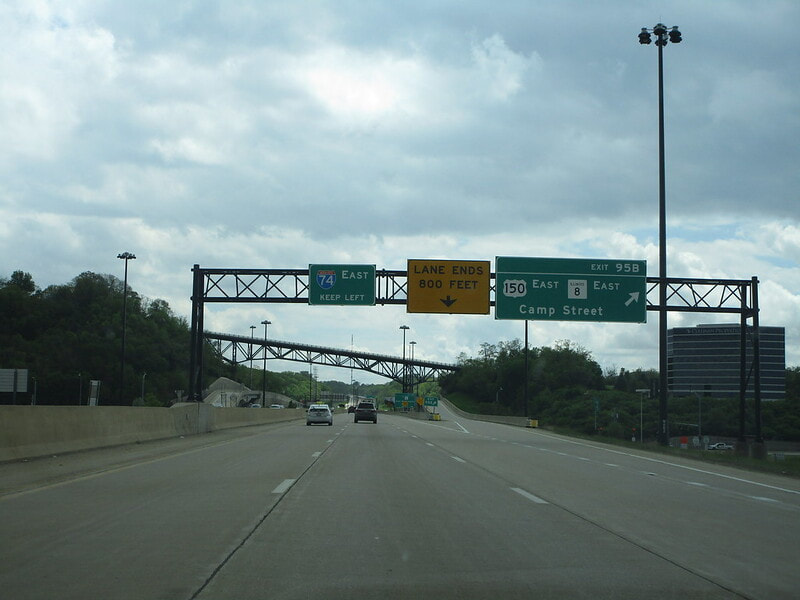 Exit 96 is a fountain interchange to Washington Street in East Peoria: 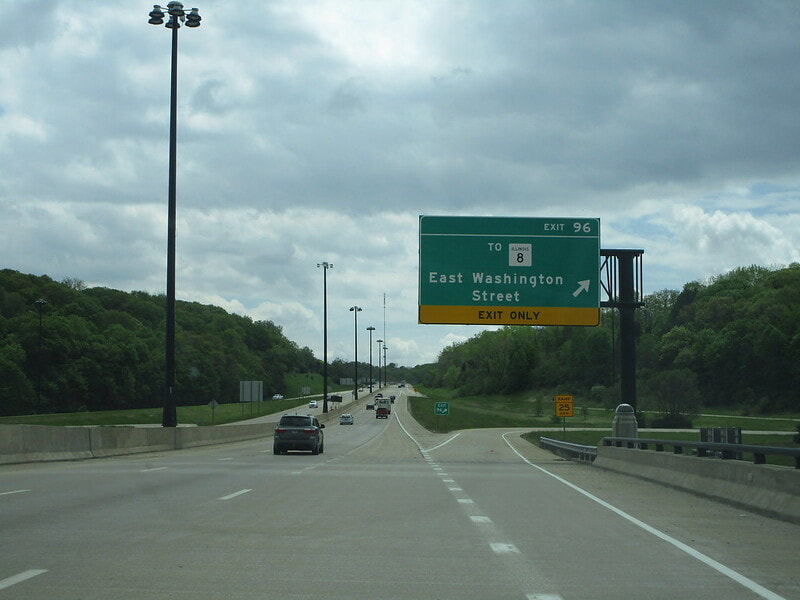 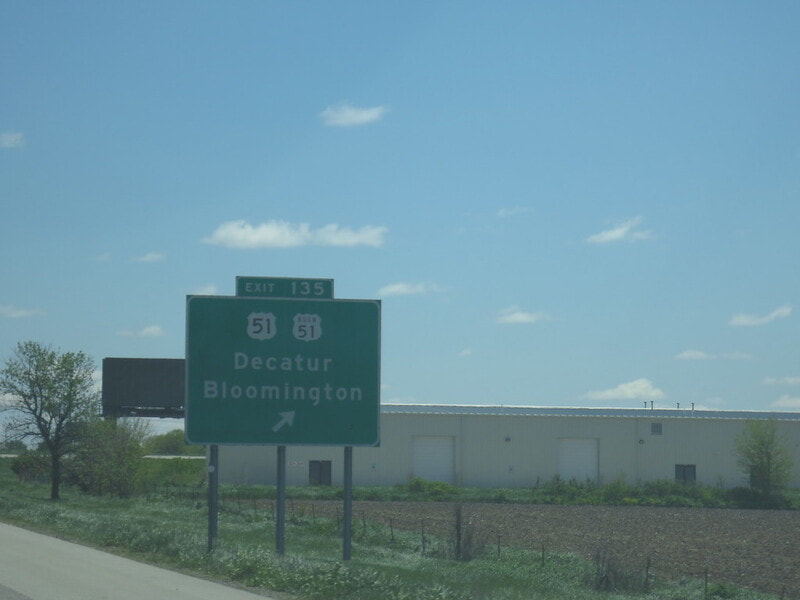 Exit 142 is for a local road leading to the town of Downs:
Exit 149 is for a county road leading to Le Roy (NOT Leroy):
Exit 152 is for US Route 136, signed as a way to reach Heyworth and Rantoul:
Exit 159 is for Illinois 54, providing access to Farmer City:
Exit 166 is the exit for Mansfield, Illinois:
Exit 172 is for Illinois 47, providing a link to Gibson City and Mahomet:
Exit 174 leads to Prairieview Road, in Champaign County:
Exit 179A is the first half of the cloverleaf to Interstate 57 in Champaign; this first ramp leads to Interstate 57 southward toward Memphis: 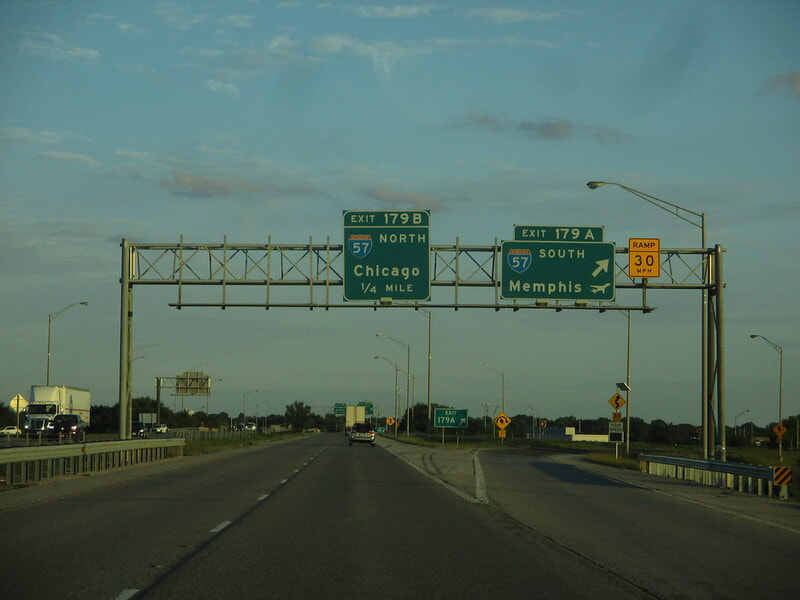 Exit 179B, the latter half of the cloverleaf, leads to Interstate 57 north toward Chicago: 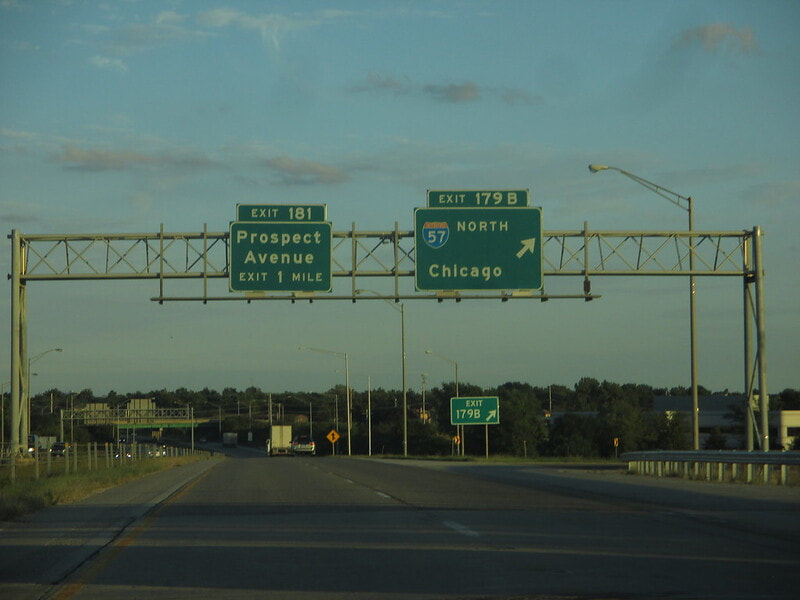 Exit 181 is the first of five interchanges to surface roads in Champaign-Urbana, leading to Prospect Avenue: 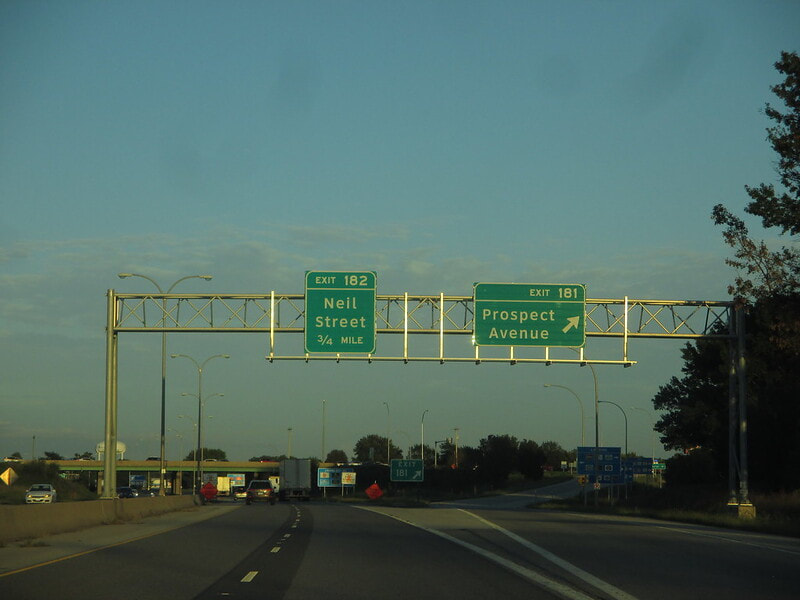 Exit 182 is for Neil Street, which continues south to downtown Champaign:
Exit 183 is for Lincoln Avenue, at a point easterly enough to be considered Urbana:
Exit 184 leads to US Route 45, known as Cunningham Avenue to the south, and providing a link to Rantoul to the north: 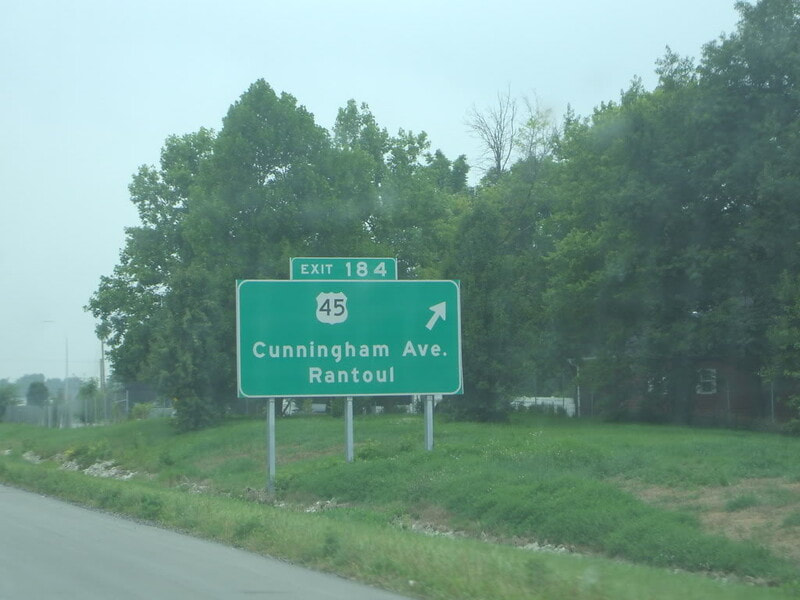 Exit 185 is a trumpet interchange to the northern beginning of Illinois 130, plus University Avenue:
Exit 192 is the exit to the town of St. Joseph, Illinois:
Exit 197 leads to the towns of Ogden and Royal, and it's a useful connection to Illinois 49's southern continuation from US Route 150, which is less than a mile to the south:
Exit 200 is for Illinois 49, with connections to Rankin and Fithian:
Exit 206 is for a local road connecting to Potomac and Oakwood:
Exit 210 in the Danville area links to US Route 150, known as Martin Luther King Drive, at a half-folded diamond interchange:
Exit 214 leads to G Street in Tilton, a town clinging to the southern side of Danville:
Exit 215A is the first half of a cloverleaf leading to Illinois 1, carrying US Route 150 along for the ride as that route dives southward toward Terre Haute; this first exit is to the south on this duplex of routes, heading down Georgetown Road (toward Georgetown, IL):
Exit 215B, the latter half of the cloverleaf, leads to Illinois 1 north (and US Route 150 west) down Gilbert Street into Danville:
Exit 216 is a half-folded diamond interchange to Bowman Avenue and Perrysville Road:
Exit 220, just shy of the Indiana border, is a half-folded diamond for Lynch Road:
Just past mile marker 220, Interstate 74 crosses into Indiana, setting out for Crawfordsville, Indianapolis, and ultimately, Cincinnati.
Back to the Illinois main page.
Back to the home page.