PAUL ACROSS AMERICA
US Route 11 is a long and important highway from the Canadian border near the northeastern corner of Lake Ontario, south and southwest to New Orleans, Louisiana.  The corridors of Interstate 81 and Interstate 59 were modeled after it. US Route 11 passes through Watertown, Syracuse, and Binghamton, in New York, before entering northeastern Pennsylvania.  In the northeastern Pennsylvania city named Scranton, US Route 11 bends southwesterly to Sunbury, where it joins US Route 15 south along the Susquehanna River. In Harrisburg, Pennsylvania, US Route 11 follows alongside Interstate 81 southwesterly, through Hagerstown, Maryland, and Martinsburg, West Virginia.  The route then continues alongside Interstate 81 through western Virginia, with bouts in Winchester, Staunton, Roanoke, Wytheville, and Bristol.  Crossing into Tennessee at Bristol, US Route 11 splits into two alignments labeled "11E" and "11W", which reconvene in Knoxville, Tennessee.  US Route 11 continues southwest to Chattanooga and into Alabama, by way of clipping the northwest corner of Georgia.  It is here that Interstate 59 appears alongside US Route 11, and both routes proceed through the Gadsden area, Birmingham, and Tuscaloosa.  US Route 11 continues alongside Interstate 59 through Meridian and Hattiesburg in Mississippi.  Finally, US Route 11 passes through Slidell, Louisiana on its way to meeting its end on the southeast side of Lake Pontchartrain at US Route 90.  This southern terminus sits just east of New Orleans. 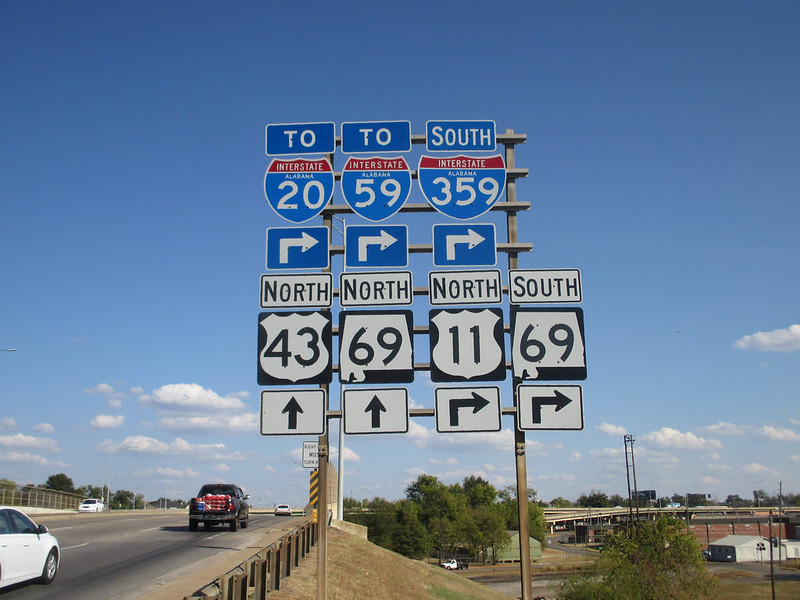 My photo for US Route 11 comes from Tuscaloosa, Alabama, on an east-west street carrying part of US Route 11, concurrent with part of US Route 43. The aperture, and the traffic reading this smorgasbord of signage, faces east, as the road approaches a busy junction in Tuscaloosa. The junction is the northern end of Interstate 359. At that point, US Route 11 turns southerly onto Interstate 359, and US Route 43 turns left, toward the north. This photo was taken in October 2016 as part of my second trip to the Gulf Coast.
Back to the nationwide main page.
Back to the home page.