PAUL ACROSS AMERICA
Interstate 65 runs from Gary, Indiana, south to Mobile, Alabama. It follows alongside US Route 31 from Indianapolis, Indiana south to Montgomery, Alabama, but both ends of this stretch continue outward with a bend to the west, away from US Route 31.  The northern end is at Interstate 90, which follows the Indiana Toll Road, at an interchange in Gary, Indiana, just east of Chicago, Illinois.  For an easy connection to Chicago, jump onto Interstate 90 westbound at this point. From the northern end, Interstate 65 heads southeast to downtown Indianapolis, where it bends more toward the south.  The Interstate leaves Indiana by crossing the Ohio River into downtown Louisville, Kentucky.  Interstate 65 continues south, bending westerly for a bit in southern Kentucky to reach Bowling Green.  The highway proceeds south through Nashville and middle Tennessee, into Alabama.  It flanks Huntsville to the west, but Interstate 565 provides a freeway connection to that city.  Interstate 65 continues south as the primary north-south highway serving Birmingham and Montgomery; at Montgomery, the highway bends southwesterly to Mobile.  The southern terminus is at Interstate 10 on the west side of Mobile, Alabama; Interstate 165 provides a direct freeway spur into downtown Mobile. 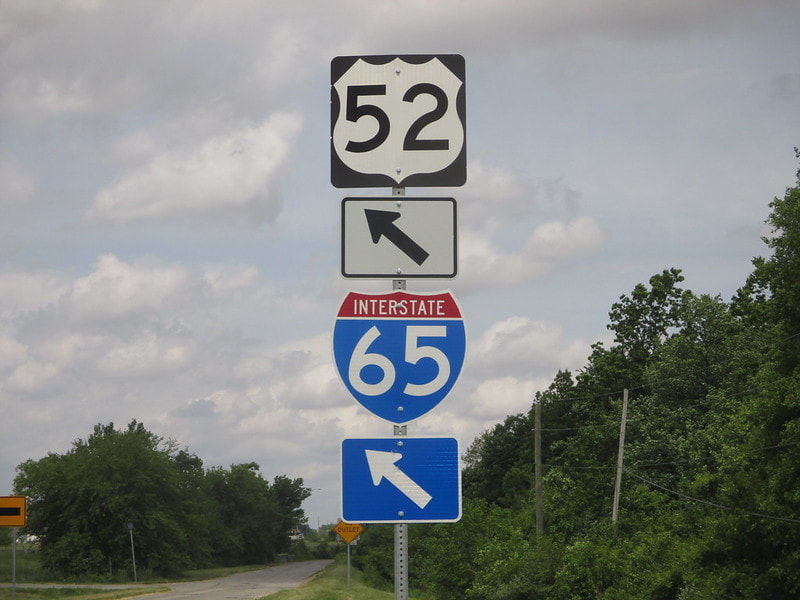 My photo of an Interstate 65 marker comes from Lebanon, Indiana, a town just northwest of Indianapolis. This photo faces southeast down Lafayette Avenue, a street that once carried US Route 52. A ramp here connects to Interstate 65's northbound carriageway, and an exit to the current US Route 52 sits just to the north. This photo was taken in May 2015, as part of a small trip routesnapping Indiana on a state level.
Back to the nationwide main page.
Back to the home page.