Interstate 469 is a 31-mile beltway around Fort Wayne, forming the eastern two-thirds of the circumference around the city.  The remaining third, along the western and northwestern side of Fort Wayne, is covered by Interstate 69; Interstate 469 flanks around the south, east, and northeast side of Fort Wayne.  In typical Indiana fashion, the state routes and US routes passing through the Fort Wayne metropolis are diverted along the freeways encircling the city, with the exception of US Route 27.  Unlike Interstate 465, however, the freeways encircling the Fort Wayne are two separate routes with two separate route numbers.  Nineteen of the fifty miles forming the circumferential beltway belong to Interstate 69 on the west side of town; the remaining miles are Interstate 469. 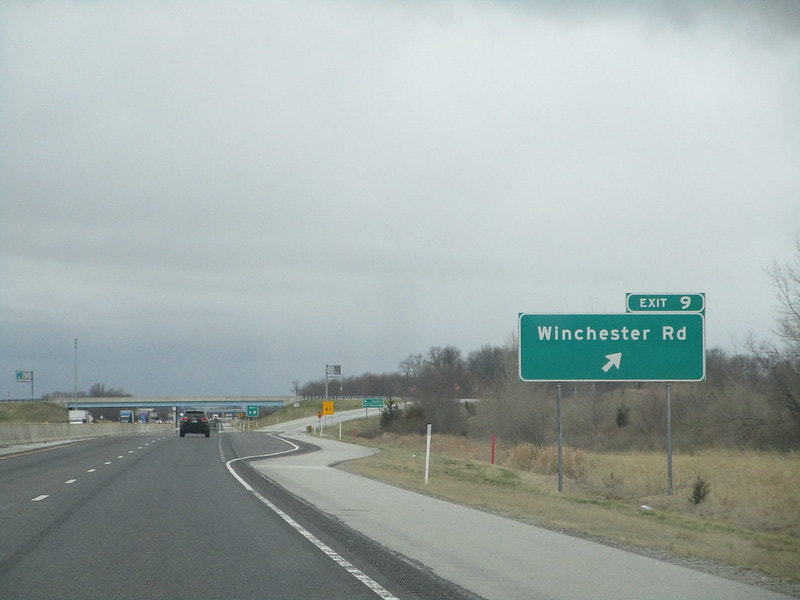 Exit 11 is for US Route 27 and the southern continuation of US Route 33, leading to Fort Wayne and Decatur...
Exit 13 leads to Marion Center Road...
Exit 15 is for Tillman Road...
Exit 17 is a kitty-corner fountain interchange for Minnich Road...
Exit 19A is the first half of an interchange with directional ramps to the roadway carrying US Route 30 east and Indiana Route 930 west.  This first ramp leads to US Route 30 east...
Exit 19B is the second half of the interchange, leading to Indiana Route 930 west, into Fort Wayne.  Northbound Interstate 469 sees a single Exit 19, leading to both routes 30 and 930...
Exit 21 leads to the eastern continuation of US Route 24.  US Routes 30 and 24 both join Interstate 469 around the northeast side of Fort Wayne...
Exit 25 is for a roadway carrying Maysville Road southwest into Fort Wayne, and Indiana Route 37's northeastern leg...
Exit 29 is for Maplecrest Road; southbound has Exits 29A and 29B leading to northbound and southbound, respectively. At this point, Interstate 469 is looping back west around the north side of Fort Wayne...
Exit 31A marks the start of Interstate 469's final interchange at Interstate 69; this first ramp labeled 31A leads to Interstate 69 northbound toward Lansing, Michigan...
Exit 31B leads to Interstate 69 south toward Indianapolis; this exit is used by US Routes 24 and 30 to continue westward...
Exit 31C is an offramp from Interstate 469 leading to Auburn Road; no other access to or from Auburn Road is provided at this interchange...
Back to the Indiana main page.
Back to the home page.