PAUL ACROSS AMERICA
US Route 77 runs from Sioux City, Iowa, to Brownsville, Texas, by way of eastern parts of Nebraska, central Kansas, central Oklahoma, and central Texas.  The northern end is at Interstate 29 in Sioux City, Iowa, just barely north of the Missouri River that separates Iowa from Nebraska. US Route 77 does its own thing in eastern Nebraska and central Kansas, serving as the main north-south highway through Lincoln, Nebraska.  US Route 77 avoids the main cities and corridors in Kansas, but in northern Oklahoma, US Route 77 jumps west to the Interstate 35 corridor.  It follows the Interstate 35 corridor through Oklahoma City into Texas.  US Route 77 follows Interstate 35E through Dallas, continuing onto the reformed Interstate 35 until Waco.  At Waco, Interstate 35 diverts more southwesterly as US Route 77 splits to head south on its own to Victoria.  From Victoria south, US Route 77 stays near the Gulf Coast. In Brownsville, US Route 77 joins US Route 83 south to the Mexican border; the routes end concurrently at the border crossing. 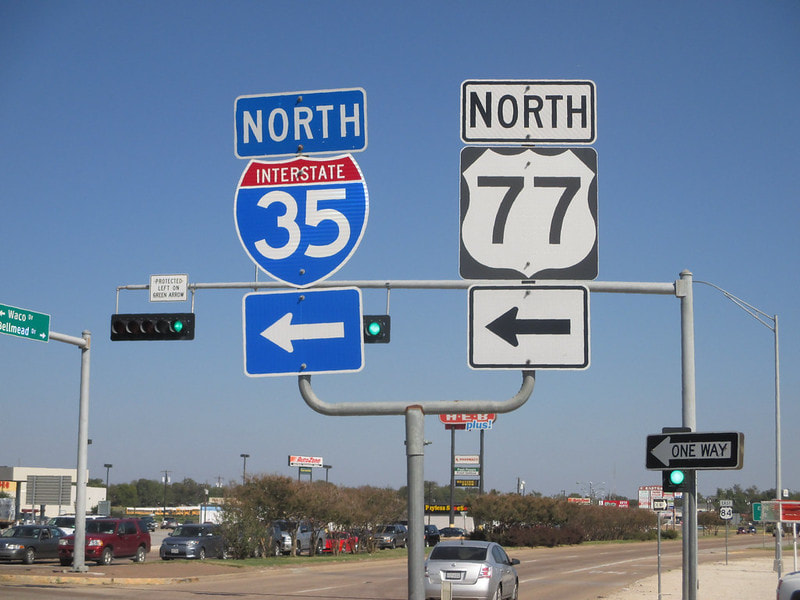 My photo for US Route 77 shows a sign assembly that sits on US Route 84 in Waco, Texas, at the junction with Interstate 35.  This sign assembly faces west to eastbound traffic on US Route 84, showing drivers where to find the onramp to Interstate 35's northbound carriageway, which also carries the northbound direction of US Route 77.  US Route 77 is concurrent with Interstate 35 across Waco, unless, of course, we're talking about the separate business alignment of US Route 77. This photo was taken along my return trip from the Gulf Coast excursion of October 2014.
Back to the nationwide main page.
Back to the home page.