The Gateway Arch, in St. Louis, Missouri, has been a quintessential American landmark since it was first constructed in the 1960's, but it didn't gain the status of national park until 2018. Situated in the downtown of St. Louis, the arch stands 630 feet tall in a green space overlooking the Mississippi River.  The arch wasn't constructed for any practical purpose, as it's a strictly artistic monument dedicated to commemorating the westward expansion of the United States.  The park was a property belonging to the National Park Service before its designation as a national park; previously, it was known as the Jefferson National Expansion Memorial.  The Gateway Arch was named in reference to St. Louis's title as "gateway to the west," owing to the city's status as the origin point of Lewis & Clark's first expedition to explore the western portions of the North American continent.

Part 1: Photos From the Outside

This first shot looks toward the river, showing the entrance to the underground building, which includes a museum and the access to the trams running upward into the arch.  Those seeking a ride up one of the arch's two trams to the top will need to enter these doorways ahead. 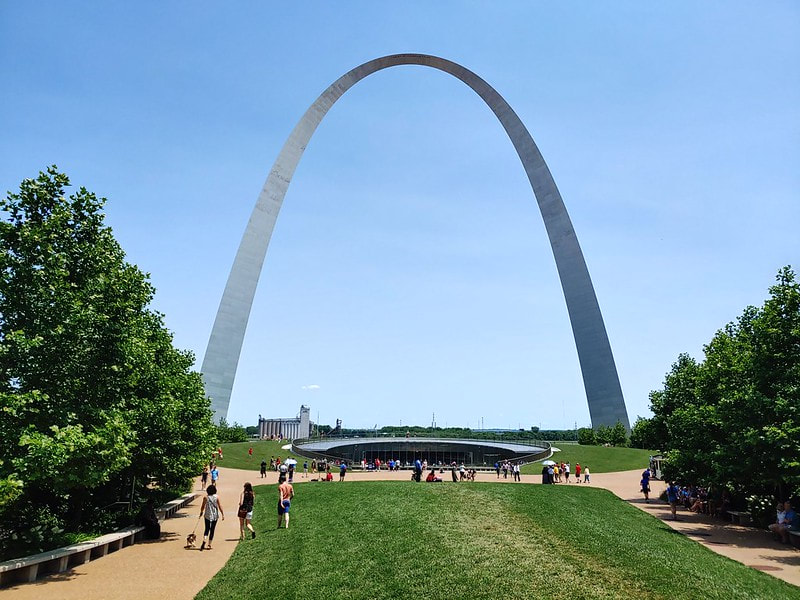 Here is a view of the arch from the same direction, the west, but farther away at a plaza in downtown St. Louis. This view includes the image of the old courthouse, where Dred Scott sued for his freedom in the famous landmark case: 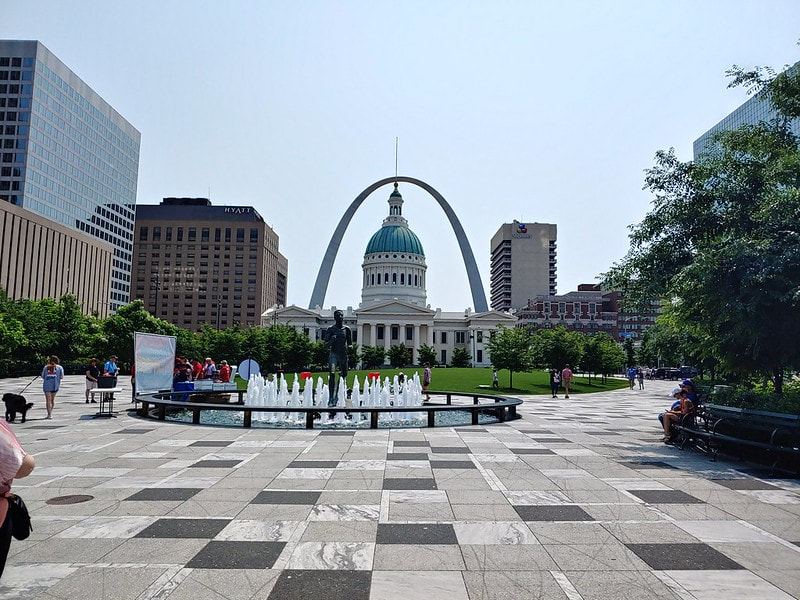 Part 2: Photos On the Way Up

This photo shows something I want everyone to know about: an example tram that sits in the museum for people to test out.  Maybe your mild claustrophobia has you on the fence on whether you want to endure the cramped ride to the top of the arch aboard one of the two trams.  Well, an example tram car sits right outside the restrooms in the northwest corner of the underground museum building, so you can get an idea of what you're in for.  You can even climb inside for a bit, to see if you can imagine yourself tolerating the four-minute ride to the top and the four-minute ride back to the bottom.  The tram car contains five seats arranged in a semicircle, with all passengers' legs pointed inward toward the door. 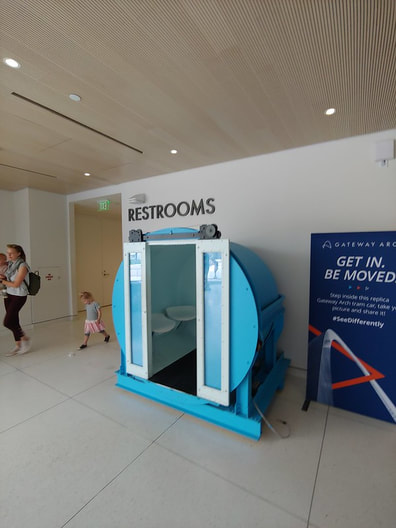 Here is a panel of display screens that might remind you of Jeopardy, or The Ring.  The museum building has these display screens and many other exhibits that chronicle the whole timeline of the Arch's inception, construction, and operation. 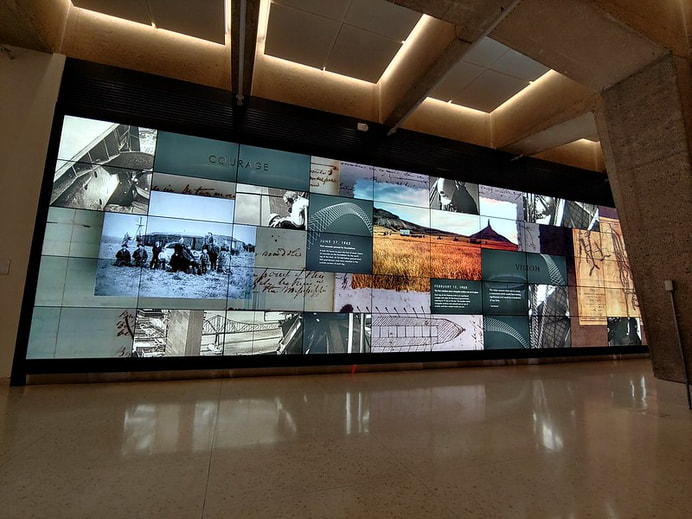 This is the corridor immediately outside the tram.  It's the diagonally-oriented hallway, or maybe more of a staircase, that's the last thing you see before entering the cramped tram cars.  A tour guide will tell you which numbered tram car will be yours to ride to the top.  Well, it will be yours and that of four other people, most likely.

In our case, this was the last thing we saw before getting the announcement that the tram broke down.  We were right in this corridor for boarding the tram cars when we were told to hold off boarding until the tram got repaired.  We stuck around for twenty minutes to see if anything changed, but since it was only day one of our stay in St. Louis, we decided to turn around and try again the next day.  On attempt number two, we did actually get to ride the north tram to the top. 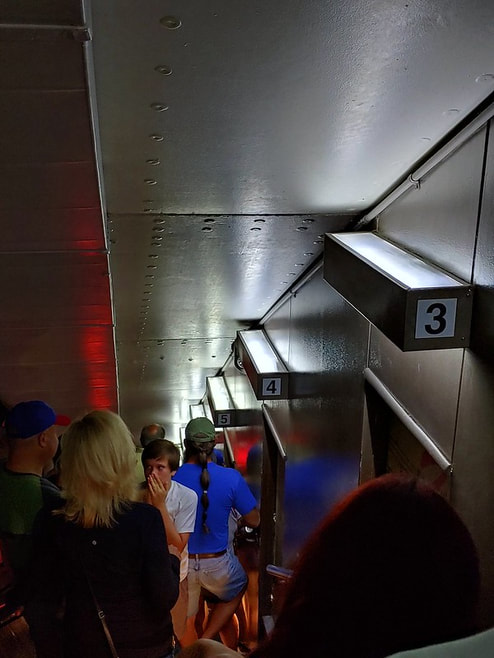 Part 3: Photos From The Top of the Arch

The tiny windows looking out of the elevated viewing area are only slightly noticeable from the outside, but they're the main attraction from the inside!  Every child will plaster themselves against them, so it's hard to nudge your way in and try to look outside.  Here's an example of what it's like in the viewing area: 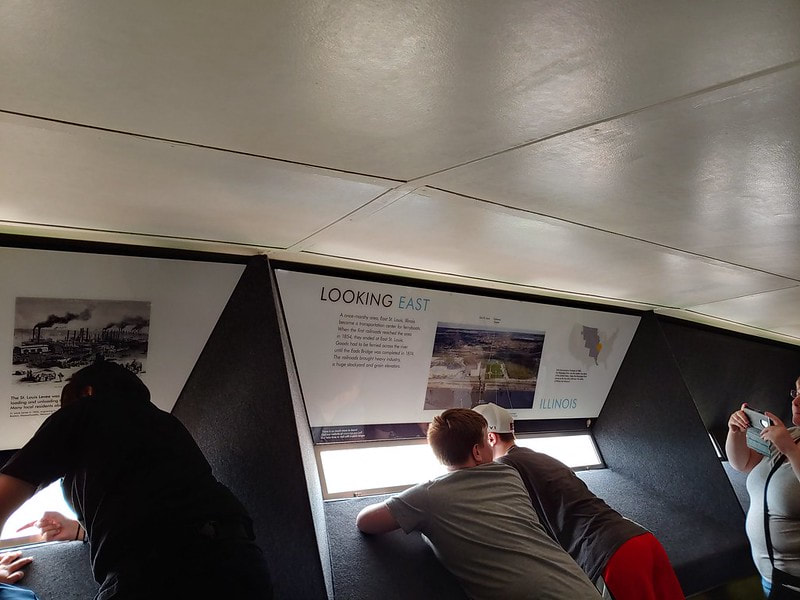 And now, here's a view looking out of the west side of the arch, toward the Old Courthouse and the city of St. Louis: 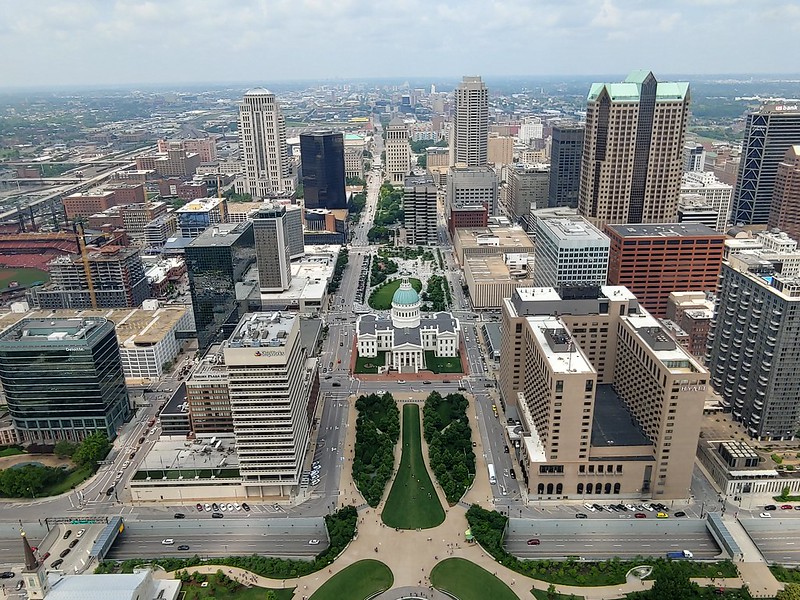 This is what you see looking straight down from the western side of the viewing platform.  The depression with all the concentric circles is the entrance to the underground museum building, which provided access to the arch's trams: 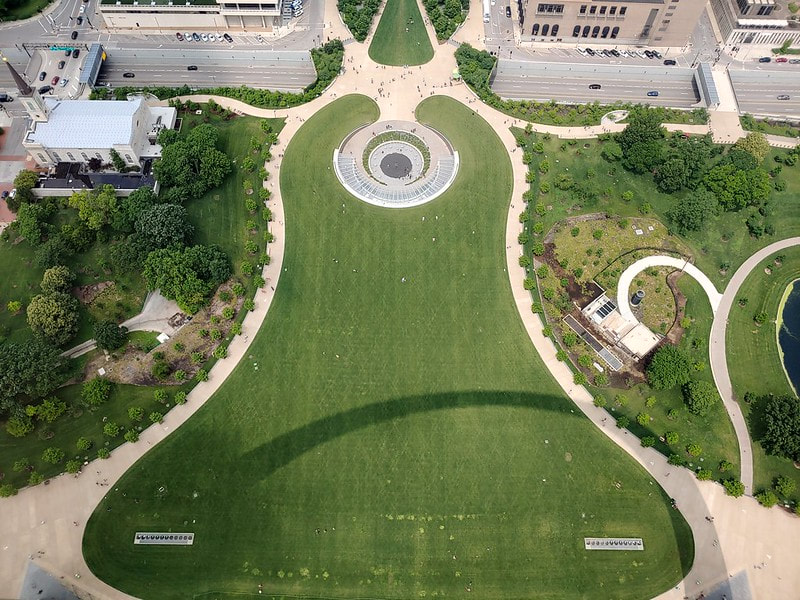