PAUL ACROSS AMERICA
US Route 80 runs east-west from Dallas, Texas, to Tybee Island, which is just beyond Savannah, Georgia to the east.  It cuts east-west across the middles of Georgia, Alabama, and Mississippi, continuing west across northern Louisiana and northeast Texas.  US Route 80 forms a fairly straight corridor from Dallas east to Meridian, Mississippi along the Interstate 20 corridor.  At Meridian, Interstate 20 diverts northwesterly, but US Route 80 continues east to Montgomery, Alabama, and to Macon, Georgia.  From Macon to Savannah in Georgia, US Route 80 follows closely along Interstate 16, nearly to US Route 80's eastern end on Tybee Island.  US Route 80's western extent merges with Interstate 30, ending as the Interstate continues west into Dallas's city center. 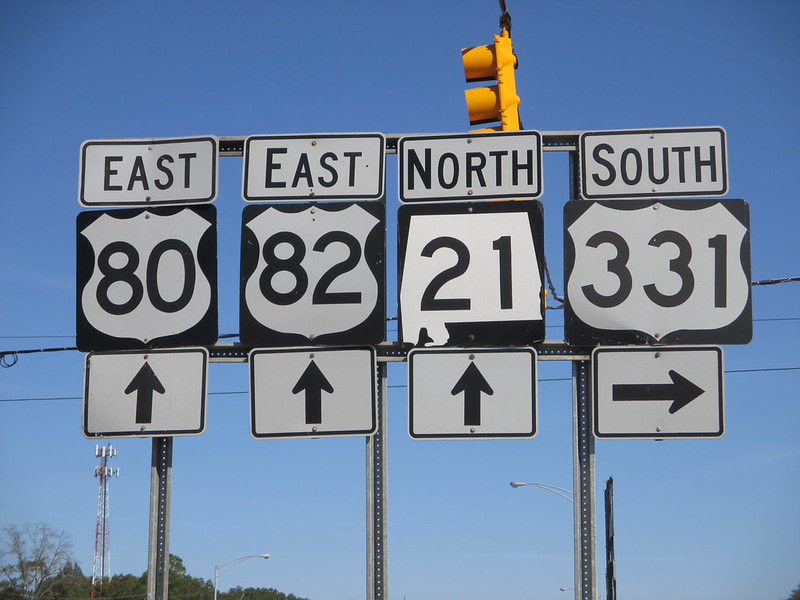 The sign assembly I photographed for US Route 80 stands in Montgomery, Alabama, at the intersection home to the northern end of US Route 331.  The signage faces west toward traffic heading east on the highway carrying both US Routes 80 and 82.  This sign was photographed in October 2014, on the first southbound leg of my first trip to the Gulf Coast.  On that trip, I clinched most of Interstate 65, which lies just to the west of this photo's location.
Back to the nationwide main page.
Return to the home page.