PAUL ACROSS AMERICA
US Route 41 is one of the longest and most happening north-south US routes, running from the northern tip of Michigan to the southern tip of Florida.  It passes through Chicago as the famed Lake Shore Drive, and continues through other relatively important locales, such as: Terre Haute, Indiana; Evansville, Indiana; Clarksville, Tennessee; Nashville, Tennessee; Atlanta, Georgia; the Tampa Bay area in Florida, and the Miami area in Florida.  The town at the northern tip of Michigan's Upper Peninsula is called Copper Harbor, and it's where US Route 41 first appears.  From that northern tip, known as the Keweenaw Peninsula, the highway winds south, east, south, and southwest on a very inefficient route through the rest of Upper Michigan.  (For a more direct route from the northern tip of Michigan straight south to Green Bay, Wisconsin, use US Route 141 instead!)  In Upper Michigan, US Route 41 hits many of the major locales, including Houghton and Marquette.  Alongside Lake Michigan, US Route 41 crosses from Menominee, Michigan, into Marinette, Wisconsin, continuing southwest alongside the bay of Green Bay into the city of Green Bay, Wisconsin.  From Green Bay to Milwaukee, US Route 41 overlaps Interstate 41, bowing a bit west around the west side of Lake Winnebago to reach Appleton, Neenah-Menasha, and Oshkosh along the way to Milwaukee.  US Route 41 overlaps Interstate 94 south to the Illinois border, where it splits to follow the famed Lake Shore Drive through Chicago.  US Route 41 is a major route along the western edge of Indiana until crossing the Ohio River from Evansville, Indiana, into Henderson, Kentucky.  US Route 41 heads almost due-south through Kentucky, with Interstates 69 and 169 forming freeway alternates along its corridor.  Crossing into Tennessee, US Route 41 parallels the southeastward Interstate 24 corridor through Clarksville, Nashville, and Chattanooga.  In Georgia and Florida, US Route 41 parallels the Interstate 75 corridor, passing through Atlanta, Macon, and the Tampa Bay area.  At Naples, Florida, both US Route 41 and Interstate 75 turn easterly across the Everglades; US Route 41's routing takes place on a surface road situated farther south, compared to Interstate 75's routing down Alligator Alley.  Eventually, US Route 41's eastward journey lands on 8th Street in Miami, heading straight east to end at US Route 1 in downtown Miami. 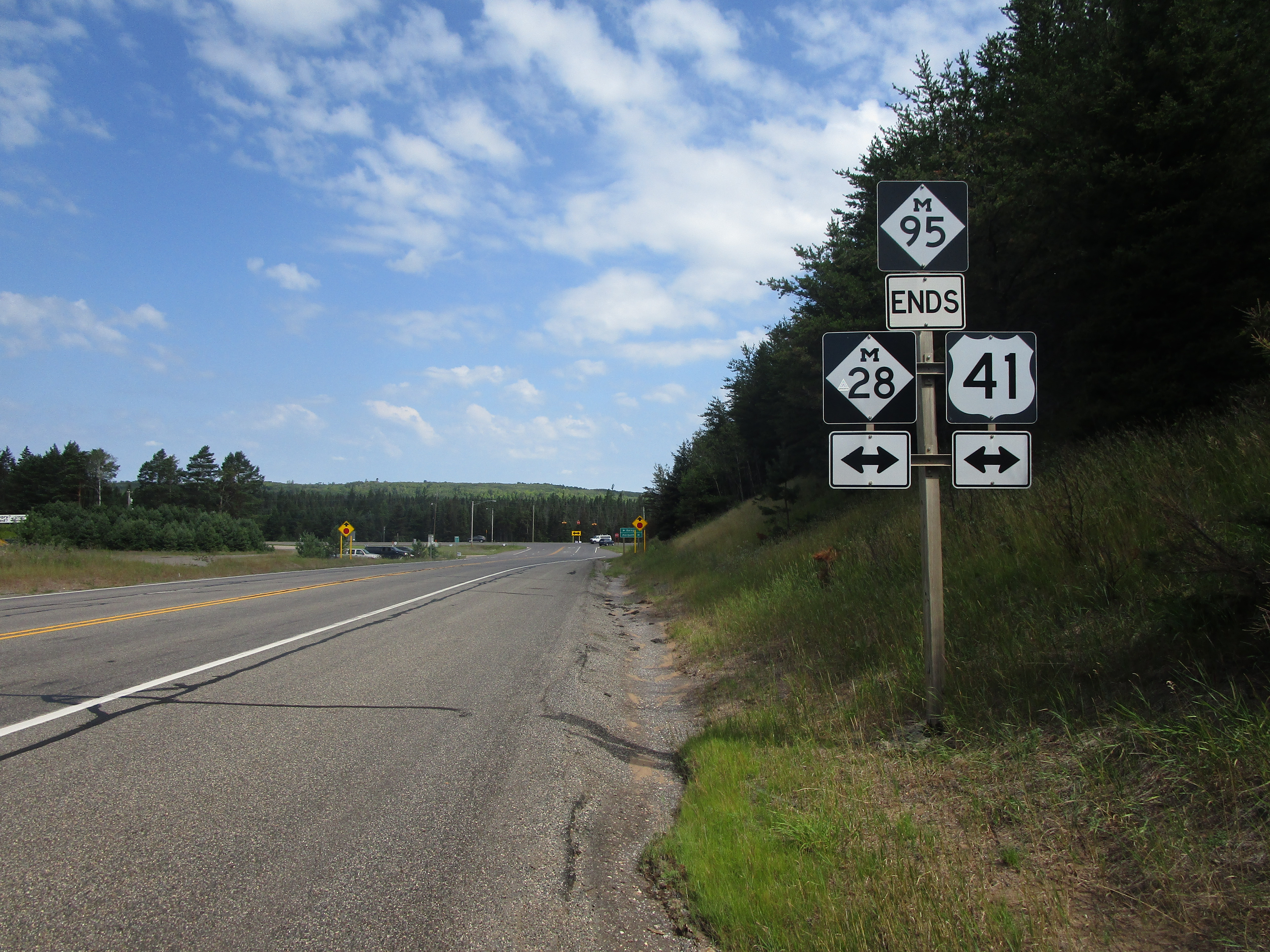 My photo for US Route 41 comes from a rural spot in the Upper Peninsula of Michigan, near the tiny town named "Champion". The junction home to this sign assembly marks the northern end of Michigan State Highway 95. The guide assembly faces south toward northbound travelers on Michigan Highway 95, and it points out that the duplex of US Route 41 and Michigan Highway 28 is reached by turning in either direction. This photo was taken at the end of July, 2022, during a trip around northern Michigan.