US Route 75 runs north-south in the northwestern corner of Iowa, north of Sioux City.  Sioux City is where US Route 75 crosses the Missouri River out of Nebraska and into Iowa, and it does so on the same bridge used by US Route 20 and Interstate 129.  While Interstate 129 ends a fraction of a mile into Iowa, at Interstate 29, US Routes 20 and 75 continue as a freeway that wraps around the southeastern side of Sioux City.  On the east side of town, US Route 20 splits to head east as a surface highway, but US Route 75 continues north-northeasterly as an expressway.  This expressway is the first portion of a complete expressway from Sioux City northeast to Mankato, Minnesota (it also involves Iowa Route 60 and Minnesota Highway 60).  At Le Mars, Iowa, this expressway is taken over by a new designation of Iowa Route 60, sending US Route 75 to split away along a northward two-lane road.  US Route 75 continues north as a rural two-lane road through Sioux Center and Rock Rapids before crossing into the southwestern corner of Minnesota. This border crossing is near the tiny town of Steen, Minnesota. 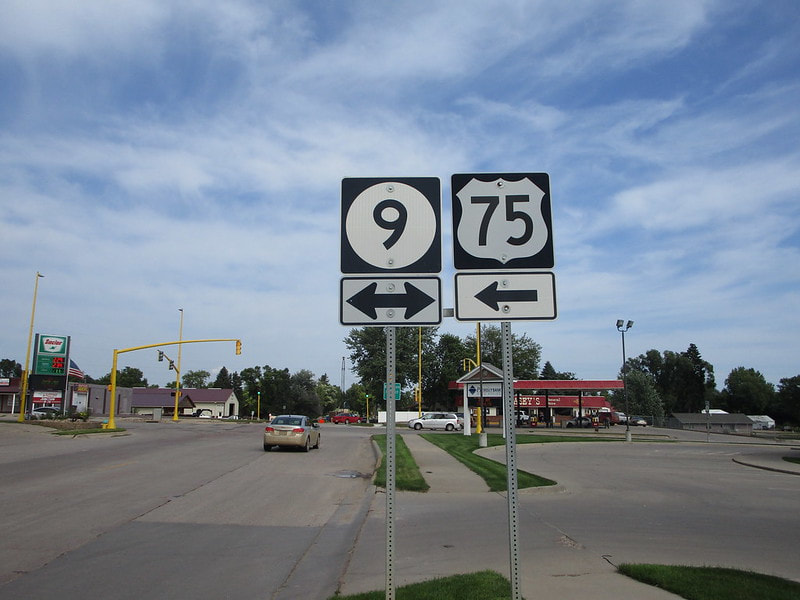 My photo of a US Route 75 sign in Iowa comes from Rock Rapids, where US Route 75's northward progression is interrupted by a westward jog along Iowa Route 9. The guide assembly shown faces south at northbound traffic on US Route 75. I'm not sure why the sign with the arrow left appears on the right, but the sign assembly does effectively list all the options. This photo was taken as I was driving across the northern end of Iowa in September 2019.
Back to the Iowa main page.
Back to the home page.