PAUL ACROSS AMERICA
US Route 1 is the definitive route connecting the important locales along the eastern seaboard. It also clings to the entire eastern edge of Maine, with its northern end in Fort Kent, at the northern tip of the state.  The northern end is a Canadian border crossing in that town; from there, US Route 1 runs south along the eastern border through Presque Isle and Houlton.  It follows a rather indirect route, but it does so to reach the point where the Maine coast meets the New Brunswick coast, and where the Canadian border meets the Atlantic Ocean.  US Route 1 hugs the coast south from Maine, through southeastern New Hampshire to Boston.  At Boston, instead of hugging the coast, it cuts southwest through Providence to Connecticut's coastline on Long Island Sound; Interstate 95 does much the same.  In New York, US Route 1 cuts across the Bronx to join Interstate 95 west across the George Washington Bridge.  It and US Route 9 run together in New Jersey's portion of the New York City metroplex, but it splits southwesterly toward Trenton and Philadelphia.  Past Philadelphia, US Route 1 runs alongside Interstate 95 to Wilmington, Delaware; Baltimore, Maryland; Washington, D.C.; Richmond, Virginia; and Petersburg, Virginia.  US Route 1 turns southwesterly at Petersburg, opting to follow along Interstate 85 instead of Interstate 95. Once in North Carolina, though, US Route 1 heads more southerly toward Raleigh, while Interstate 85 heads more southwesterly to Durham.  Beyond Durham, US Route 1 heads southwesterly through Columbia, South Carolina, to Augusta, Georgia.  Within the state of Georgia, US Route 1 adopts a more north-south trajectory, passing through no other sizeable cities besides Augusta.  US Route 1 adopts more of a southeasterly bent toward Jacksonville, Florida, and then serves the many cities and towns on the shores of the inner Atlantic Coast.  While Florida Route A1A serves the outer coast along Florida's chain of barrier islands on the outside of the Intracoastal Waterway, US Route 1 stays along the west side of the Intracoastal Waterway.  US Route 1 reaches Miami, and continues south even beyond there.  The southernmost length of US Route 1 is a road built on the ocean, connecting the chain of islands known as the Florida Keys.  The far end of US Route 1 sits on Key West. 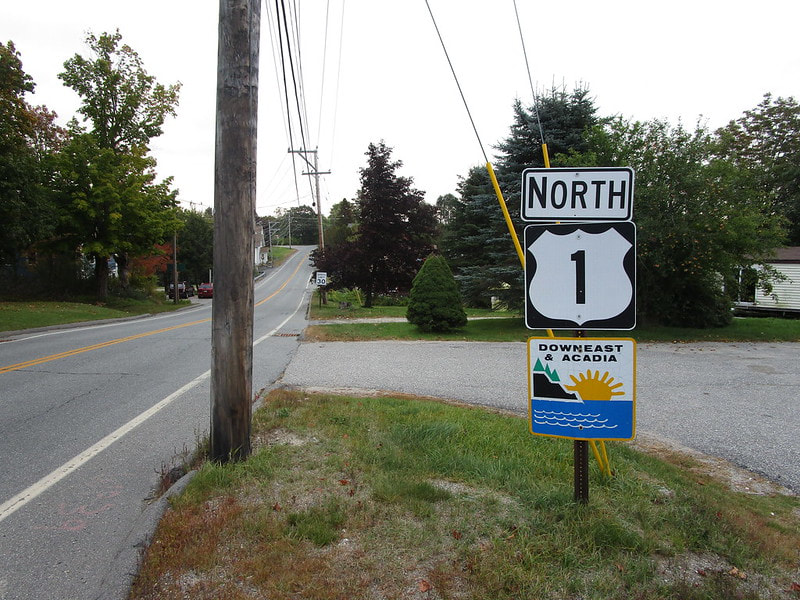 My photo for US Route 1 comes from Harrington, Maine.  The northbound trailblazer shown shows traffic that they are leaving the small town, and its alternate route of US Route 1A, heading north.  I took this photo along the trip to eastern Canada and Maine, in October 2019.
Back to the nationwide main page.
Back to the home page.