PAUL ACROSS AMERICA
Interstate 85 is a diagonally-routed freeway from Montgomery, Alabama, northeast through Atlanta and Charlotte to Petersburg, Virginia, which is just south of Richmond.  I'm pretty sure the east-west distance between the endpoints is more than the north-south distance between the endpoints, but the route was given an odd number and signed as a north-south route anyway.  The southwestern end is at Interstate 65 in Montgomery, Alabama, and from there, Interstate 85 heads east, curving northeasterly as it passes Tuskegee, Alabama.  Interstate 85 continues northeast past Opelika and Auburn to enter Georgia at the middle of that state's western border.  Though it passes well to the north of Columbus, Georgia's third-largest city, a spur route labeled Interstate 185 extends south to serve Columbus directly.  Further into Georgia, Interstate 85 runs northeast through Atlanta, where its segment concurrent with Interstate 75 through downtown hosts more daily traffic than any other Interstate in the country.  Interstate 85 continues northeast beyond Atlanta, passing north of Athens, to enter South Carolina.  Interstate 85 is the most important highway across the Upstate, continuing through Greenville and Spartanburg.  The Upstate is the only part of South Carolina traversed by Interstate 85, though, because right after doing that, it enters southern North Carolina, curving easterly toward Charlotte.  Interstate 85 continues northeast out of Charlotte, joining Interstate 40 east from Greensboro to Durham.  At Durham, Interstate 85 does its own thing again, turning northeasterly to end in Petersburg, Virginia, at an interchange with Interstate 95.  Interstate 95 to the north connects Interstate 85's traffic with the mid-Atlantic and Northeast regions, and Interstate 65 leads traffic from the southwestern end farther southwest to Mobile and the western half of America's Gulf Coast.  Interstate 85 roughly parallels US Route 29 for much of its length south of Greensboro, North Carolina.  From Durham north, it's closer to paralleling US Route 1. 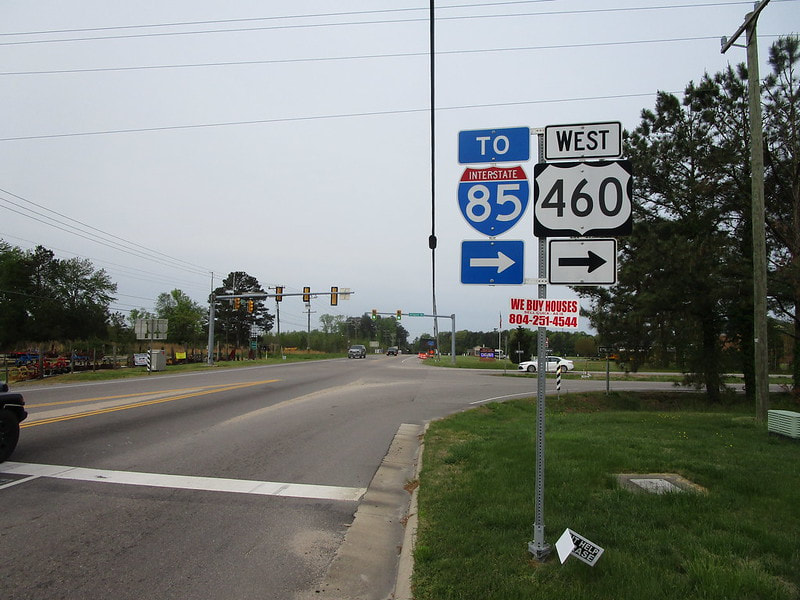 My photo of an Interstate 85 marker comes from the western outskirts of Petersburg, Virginia.  The signage depicted sits at an intersection just southeast of the third interchange downstream from Interstate 85's northeastern end at Interstate 95.  The aperture looks southwesterly down US Route 1, at an intersection where US Route 460 splits from US Route 1, turning right.  The right turn will put traffic onto US Route 460 west, and that traffic will immediately encounter an interchange with Interstate 85, as indicated by the guide marker depicted.  The signage faces northeast.  This photo was taken along part of the Virginia trip, in April 2021.
Back to the nationwide main page.
Back to the home page.