PAUL ACROSS AMERICA
Interstate 24 is a diagonal route, running northwest from Chattanooga, Tennessee, to a point in southern Illinois on the way to St. Louis, Missouri.  The southeastern endpoint is east of downtown Chattanooga, at Interstate 75.  From there, Interstate 24 runs west through downtown, dipping ever so slightly southward into Georgia thereafter.  It spawns the northern beginning of Interstate 59 south of the Georgia line, before correcting and coming back north into Tennessee.  As it does, the northwesterly angle the route keeps hold, and Interstate 24 runs northwest to Nashville and beyond.  Near Clarksville, Tennessee, northwest of Nashville, Interstate 24 nudges northward into Kentucky, where it continues its northwesterly pathing.  Once it reaches Paducah, it heads north across the Ohio River into Illinois. After less than forty miles in Illinois, Interstate 24 ends near the small town of Goreville, Illinois, at an interchange with Interstate 57.  Most traffic oriented northwestward on Interstate 24 will use Interstate 57 north to Interstate 64 west, to access the St. Louis area and its highway connections.  Signage is provided in the field to guide traffic from Interstate 24 to St. Louis, and vice versa. 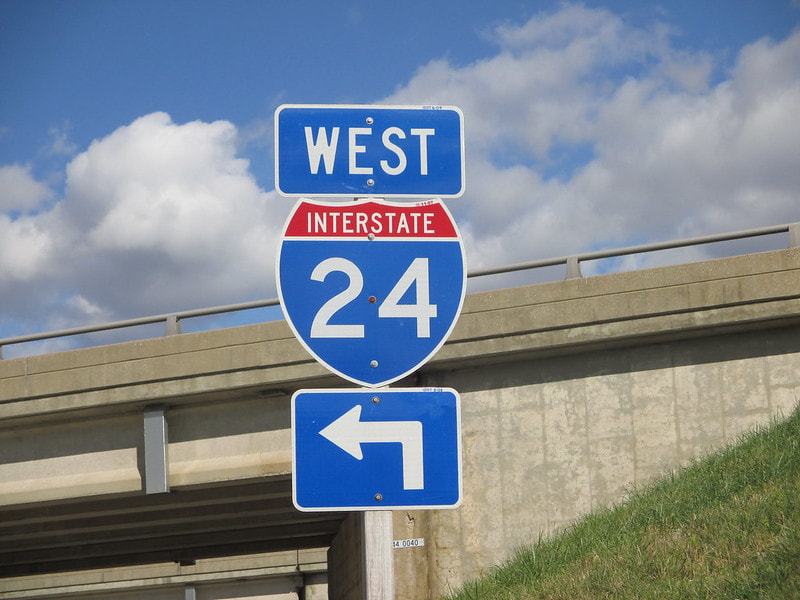 My photo of an Interstate 24 marker comes from the stretch of US Route 45 heading north out of Vienna, Illinois (pronounced "VYE-en-na").  Interstate 24 has a standard diamond interchange here; the guide marker shown faces south, positioned just south of the overpass carrying the Interstate above US Route 45.  It notifies northbound travelers on US Route 45 that the left turn onto Interstate 24's westbound onramp is coming up soon.  This photo was taken before I cared about including more context in my route marker photos for aesthetic purposes; it comes from the early part of my first trip to the Gulf Coast in October 2014.
Back to the nationwide main page.
Back to the home page,