Illinois Route 336 is Illinois's newest rural expressway, built to connect Macomb to Quincy.  One of the main reasons given for building this sparsely-traveled highway is that, while many regions of Illinois are connected to some kind of expressway or freeway, this section of western Illinois lacked any kind of high-profile highway connection. This led political thinktanks to dub this section of Illinois, "Forgottonia."  Long-range plans for Illinois 336 aim to extend it farther east until it connects to Peoria, specifically the Peoria Airport interchange along Interstate 474.

​To try and direct more traffic onto Illinois 336, the governments of Missouri and Illinois enacted Illinois Route 110 and Missouri Route 110, alternately known as the so-called "Chicago-Kansas City Expressway".  This Route 110 is nothing more than an overlaid highway designation for a suggested route between Chicago and Kansas City, using already-existing highways.  This suggested route is little-known, and those who do know about it almost certainly ignore it, as mapping services are much more likely to suggest the routings of I-80 to I-35 via Des Moines, or I-55 to I-70 via St. Louis.  Drivers generally will not deviate from the quicker routing suggestions provided by mapping services, to instead opt for the somewhat more convoluted routing of Route 110.  This leads those knowledgeable of the highway network to largely consider Route 110 a folly; at the very least, it is a futile attempt to help retroactively justify the construction of Illinois 336.  (I don't mention Illinois Route 110 on this site other than right here, because it's not an independent route; it's a futile attempt to highlight a specific path between two cities that almost nobody will use, and a futile way to retroactively justify the potentially dubious construction of a new highway.)

Our journey along Illinois 336 will start as Interstate 172 ends near Quincy, pointing us toward the north and east; our journey will end on the north side of Macomb, where Illinois 336 currently ends....for now.

Illinois 336 begins as Interstate 172 ends.  The northern end of the I-172 freeway, just northeast of Quincy, transitions to a rural expressway, a style of highway more common in the Plains States to the west than in Illinois.  Rural expressways are designed to have at-grade intersections with minor roads to provide access to farmers and rural residents, whereas a truly limited-access freeway wouldn't allow anyone this kind of direct access without a separate frontage road.  Rural expressways still have interchanges with other primary highways; often, the list of highways connected by interchange rather than an at-grade intersection is the same list of connecting highways maintained by the state DOT. 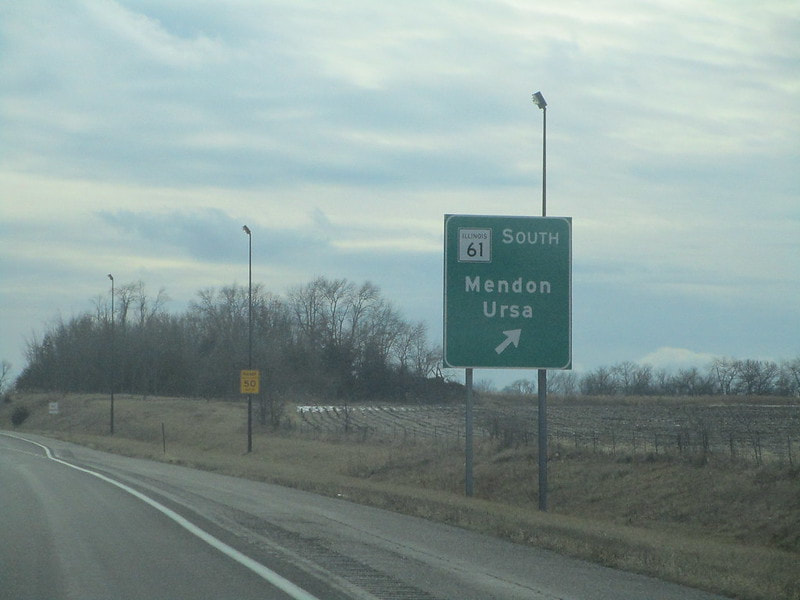 At another interchange, Illinois 61 departs from Illinois 336 to continue east...
Just west of Bowen, Illinois 94 approaches from the southeast and joins Illinois 336 northward: 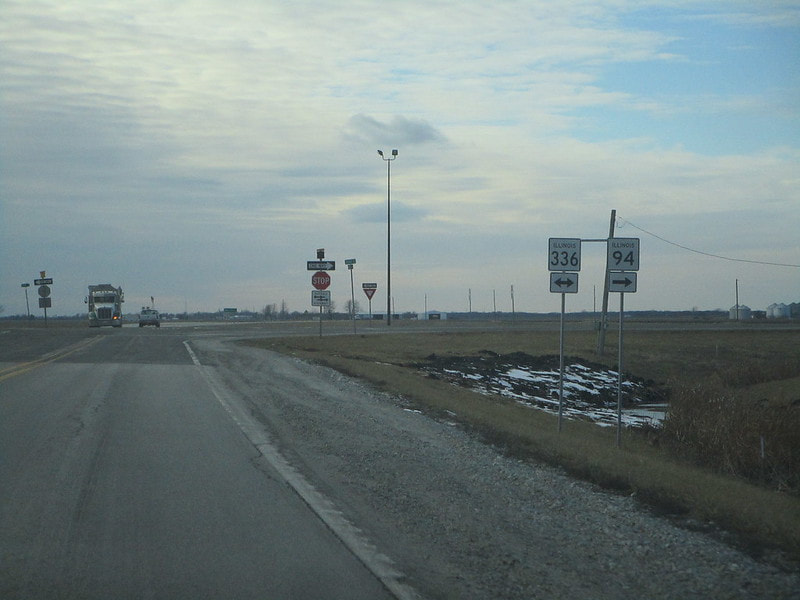 Between Bowen and Carthage, Illinois 94 and Illinois 336 run concurrently: 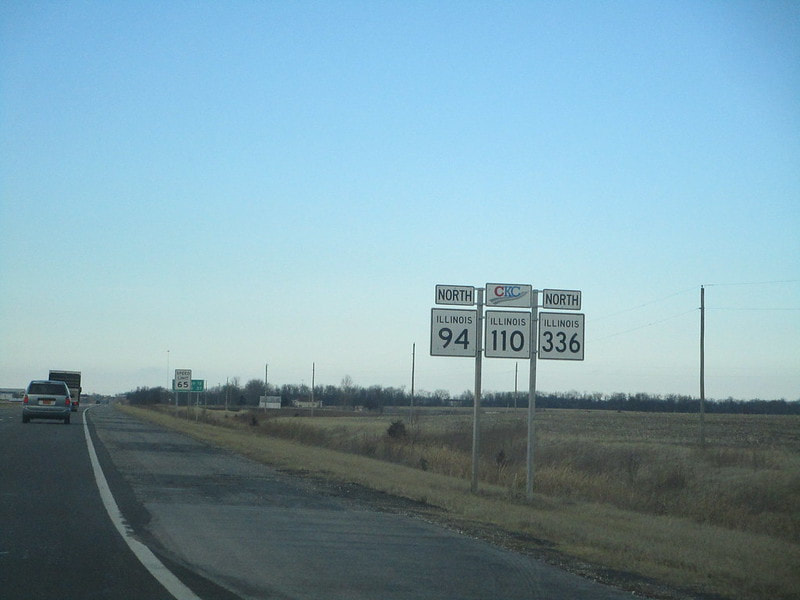 At Carthage, an interchange sends Illinois 94 continuing to the west, but US Route 136 comes from the west and joins Illinois 336 as it turns easterly.  This forms a rare phenomenon where three distinct duplexes meet at one point: 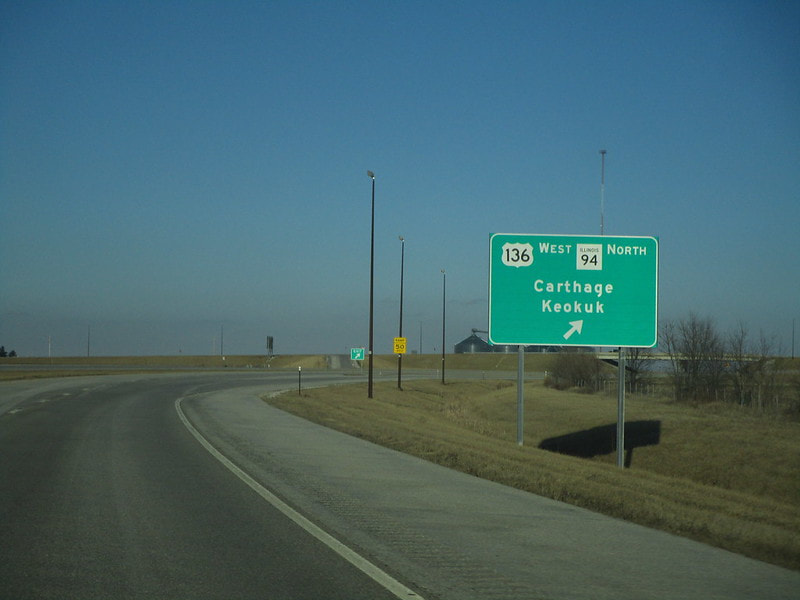 Illinois 336 and US Route 136 now run east-west concurrently, having traded one concurrency for another: 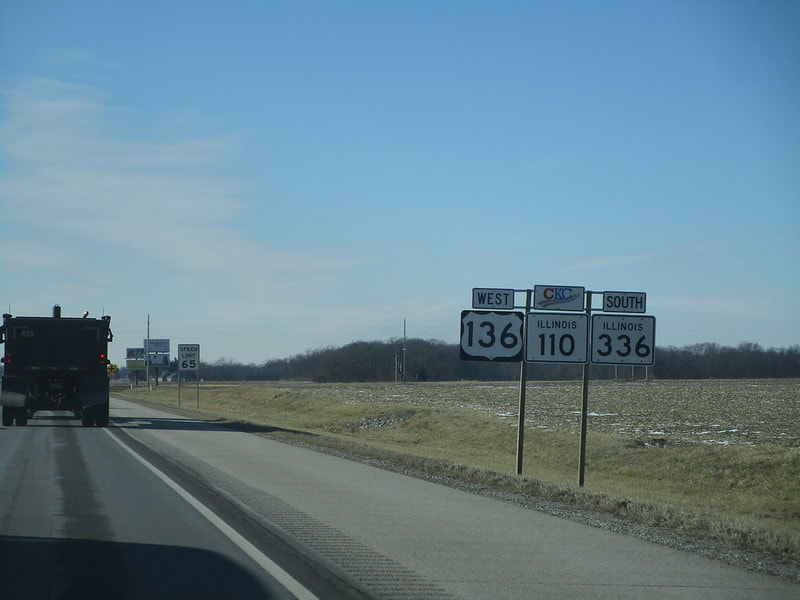 Illinois 61 already joined us and departed us once before, but now it meets its north end along Illinois 336: 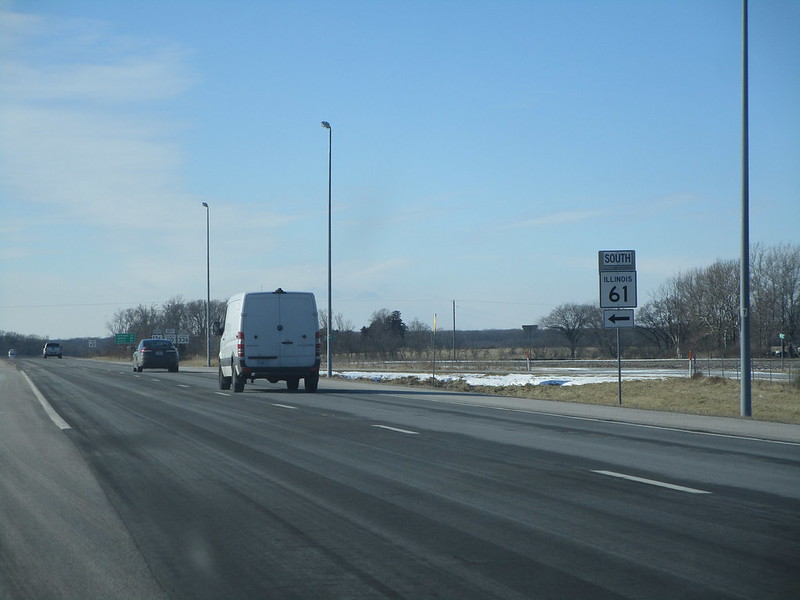 Near the Illinois town of Tennessee, US Route 136 departs to the northeast as a local road: 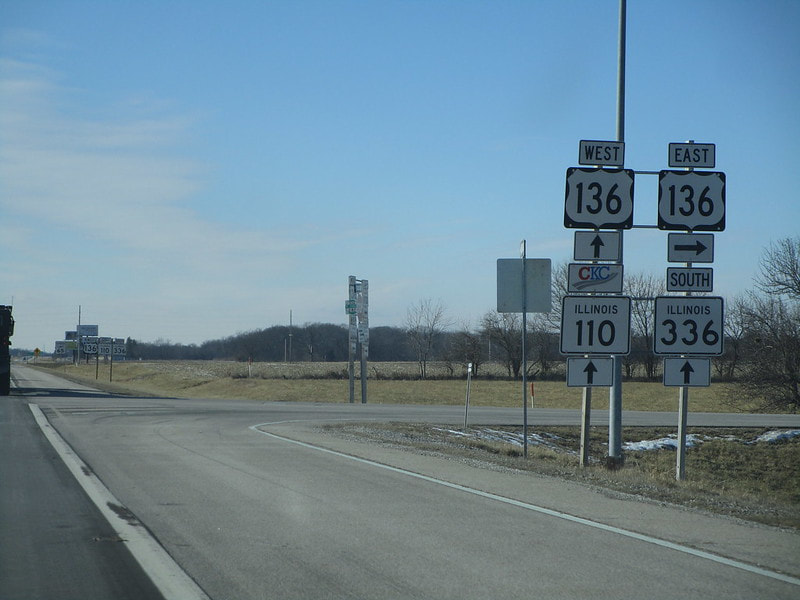 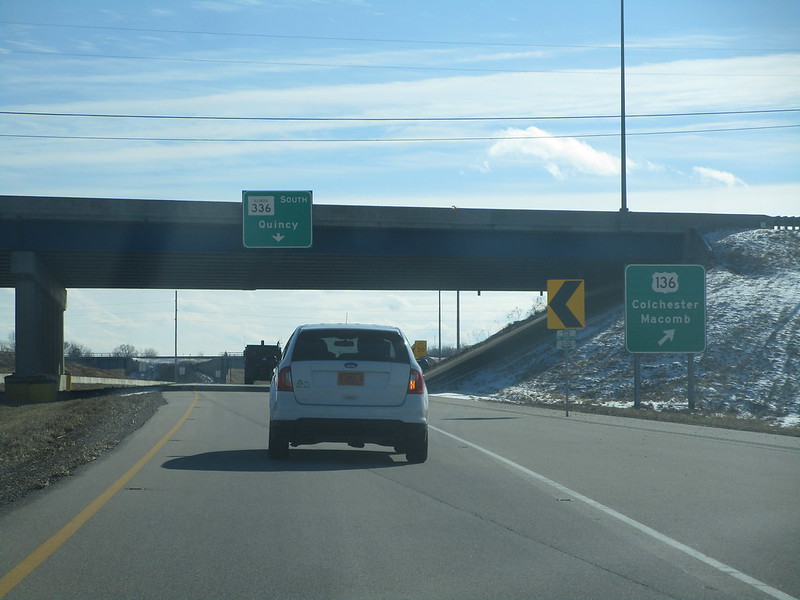 Then, Illinois 336 continues as a two-lane highway until it meets its current end, on the north side of Macomb at US Route 67.  (If you're wondering, Illinois 110 continues north on US67 to US34 east to I-74 north to I-80 north to I-88 east to I-290 east into Chicago.  If it sounds a bit convoluted, you aren't the only one who thinks so! The route to Kansas City involves US36 and I-35.) The sign shown below is on US Route 67 northbound. 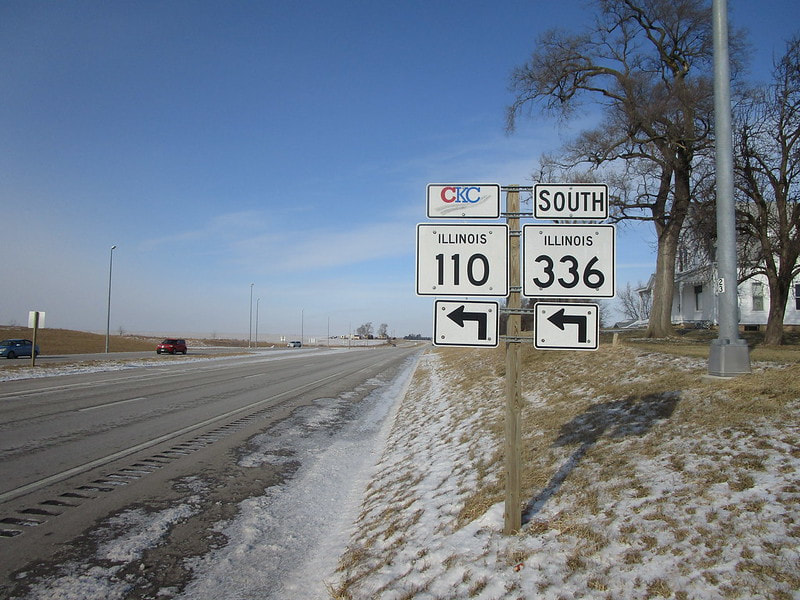