PAUL ACROSS AMERICA
US Route 136 runs from Indianapolis west across western Indiana, central Illinois, northernmost Missouri, and southern Nebraska.  The eastern start is along the western leg of Interstate 465, on the west side of Indianapolis, right next to the interchange where Interstate 74 joins 465 from the west.  US Route 136 runs westerly along Interstate 74 in western Indiana, but once it crosses into Illinois, it jumps north from Danville to a new westbound alignment.  US Route 136 is one of the straightest, most boring routes in Illinois, but then it reaches the Mississippi River.  US Route 136 crosses into Keokuk, a town at the southern tip of Iowa, before immediately getting out of Iowa and crossing the full width of northernmost Missouri.  US Route 136 reaches southern Nebraska by crossing the Missouri River out of Missouri, connecting to various points in Nebraska's southern reaches. The western end is near the small town of Edison, Nebraska, at US Route 6 and US Route 34 (duplexed).  Aside from the eastern end at Indianapolis, US Route 136 is remarkable for avoiding all major cities and even minor cities. 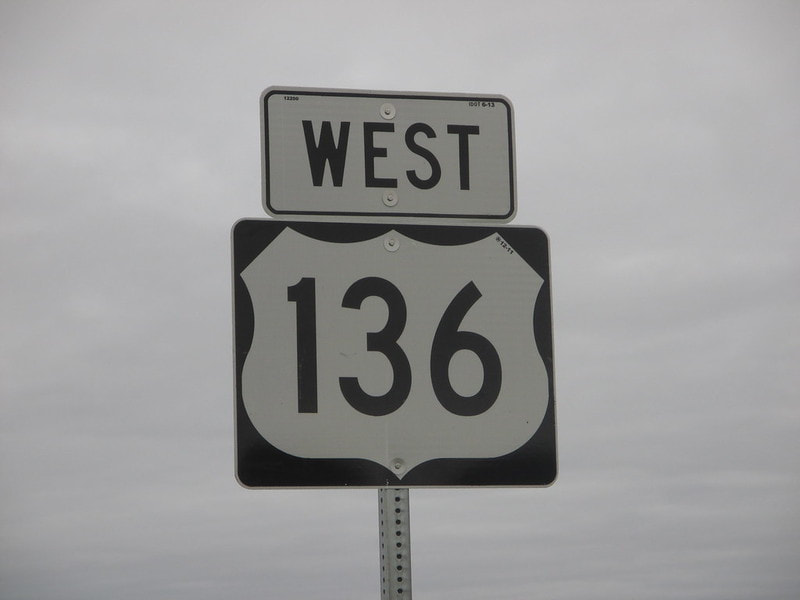 My photo for US Route 136 is the westbound trailblazer reassuring drivers coming from the Interstate 57 interchange in Rantoul, Illinois.  This was one of the first photos taken as part of the first trip to the Gulf Coast in October 2014.  Since the lighting was poor, I'll probably replace this photo during an upcoming trip around the Midwest region.  (You can also tell this is one of my earlier photos because I'm way too close to the subject matter, and there's no other context visible.)
Back to the nationwide main page.
Back to the home page.