PAUL ACROSS AMERICA
US Route 65 runs north-south through central Iowa, central Missouri, north-central Arkansas, southeastern Arkansas, and northeastern Louisiana.  The northern end is barely north of the Minnesota/Iowa state line, in Albert Lea, Minnesota, at Interstate 35.  That northernmost segment of US Route 65 is concurrent with US Route 69, and both routes end at the same interchange with Interstate 35, which sits just south of Interstate 90.  US Route 65 stays east of Interstate 35 in Iowa and Missouri, poking a little westward to connect with Des Moines.  In Missouri, US Route 65 is the main north-south highway through Springfield and Branson.  When it reaches Arkansas, US Route 65 turns a little southeast to descend into Little Rock.  The southeasterly bent continues into southeastern Arkansas, where US Route 65 begins following the western bank of the Mississippi River south into Louisiana.  US Route 65 ends in eastern Louisiana, at US Route 425, across the river from Natchez, Mississippi.  The Natchez area is home to US Route 61 and US Route 84, plus two more US highway endpoints for US Routes 98 and 425. 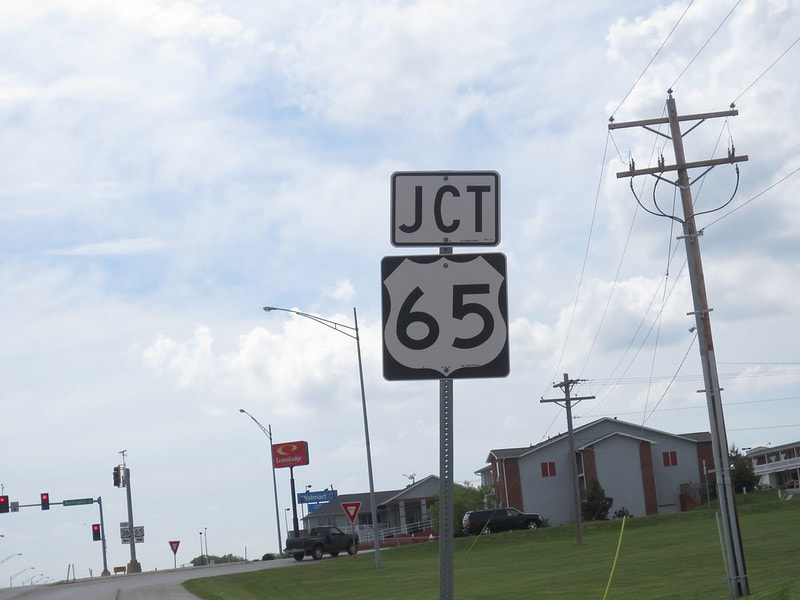 My photo for US Route 65 is a junction marker on US Route 36's business alignment in Chillicothe, Missouri.  The signpost faces east, just east of US Route 65. The angle of the photo is strange because the signpost is leaning.  This photo was taken in May 2014 as part of my first nationwide sign excursion to the St. Joseph, Missouri area, though I might replace this photo with a better one in the future.
Back to the nationwide main page.
Back to the home page.