PAUL ACROSS AMERICA
Interstate 55 connects Chicago, St. Louis, Memphis, and southern Louisiana, ending just west of New Orleans. The northern start is a stack interchange with Lake Shore Drive, which carries the US Route 41 designation, in Chicago. About a mile to the west, Interstate 55 reaches its first junction with other Interstates, namely Interstate 90 and Interstate 94.  The southwestern trajectory of Interstate 55 across Illinois replaces the path once taken by the famed US Route 66, connecting to Bloomington-Normal and Springfield on the way to St. Louis, Missouri.  St. Louis is where Interstate 55 crosses the Mississippi River for the first time (spoilers), entering the state of Missouri.  Beyond St. Louis, Interstate 55 flanks the Mississippi River to the west, across southeastern Missouri and northeastern Arkansas.  The highway cuts east over the Mississippi River again, so it can reach Memphis, Tennessee.  It turns back southerly in Memphis again, so it can move into Mississippi.  Interstate 55 runs alongside US Route 51, and the corridor shared by the two routes forms a backbone down the middle of Mississippi.  After passing through Jackson, Mississippi, Interstate 55 heads through the southern part of the state into southern Louisiana.  It crosses Interstate 12 at Hammond, and then it rides on a long bridge over the swamps along Lake Pontchartrain for its final stretch.  This final stretch ends at Interstate 10, at a point twenty miles west of New Orleans; this is just outside of La Place, Louisiana. 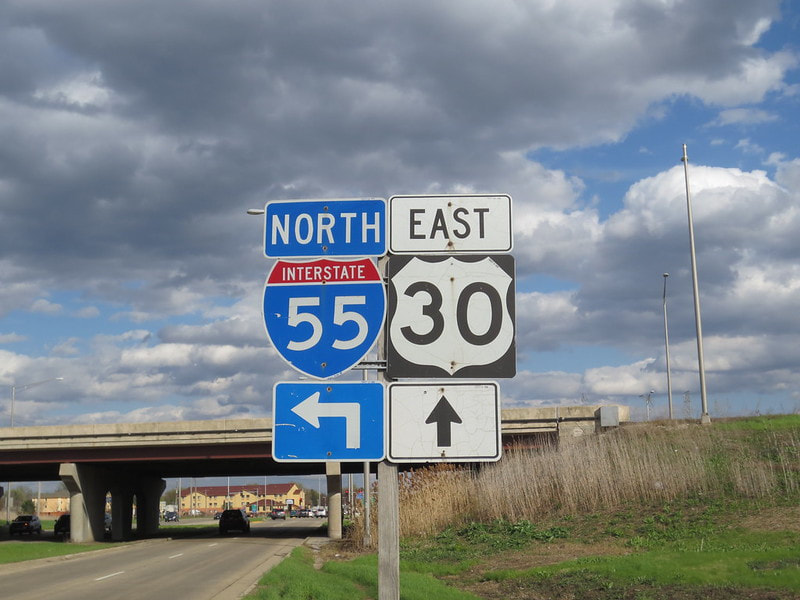 My photo of an Interstate 55 marker comes from the Interstate's junction with US Route 30 in Plainfield, Illinois.  At this junction, Interstate 55 runs northeast-southwest, and US Route 30 runs southeast into the photo. The sign faces northwest to show traffic that the turn onto Interstate 55 north is coming up soon.  This photo was taken in May 2014, as I was just thinking about starting a nationwide sign collection.
Back to the nationwide main page.
Back to the home page.