PAUL ACROSS AMERICA
US Route 56 runs from Kansas City, Missouri, west and southwest to Interstate 25 in northeastern New Mexico. is a meaningful route to the state of Kansas, but not really to any others.  The eastern end of US Route 56 is at US Route 71 on the south side of Kansas City, Missouri.  From there, the highway runs west through some suburban areas in Kansas before joining Interstate 35 for a considerable distance; for this reason, I'm not sure why the section described so far can't be a different route designation altogether.  In any case, US Route 56 follows Interstate 35 out of the Kansas City metroplex and starts doing its own thing, heading west and southwest across rural Kansas.  US Route 56 leaves Kansas out the southwest corner of the state into the western tip of the Oklahoma panhandle, cutting southwesterly through Boise City, Oklahoma.  From Boise City onward, US Route 412 runs concurrently with US Route 56, and the two routes end together at Interstate 25 in Springer, New Mexico. 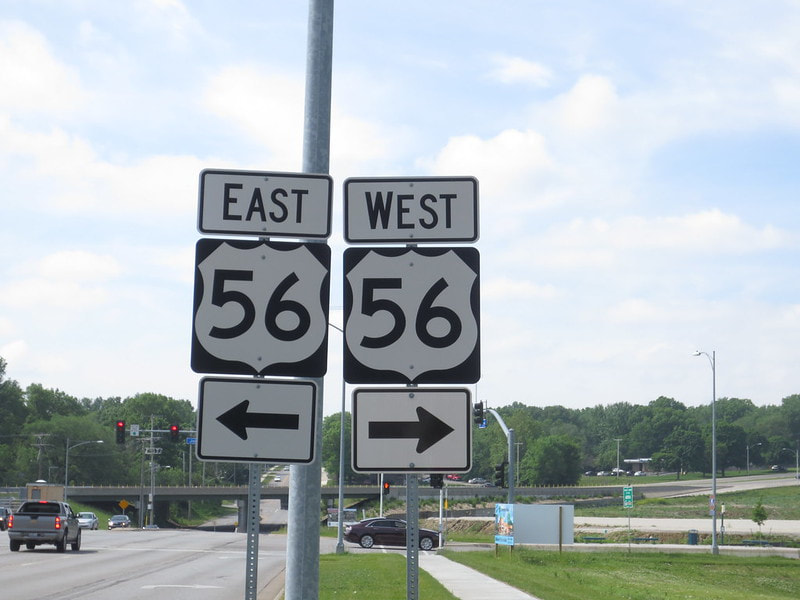 My photo for US Route 56 shows a pair of guide markers facing north on Roe Avenue, where Mission, Kansas, meets Roeland Park, Kansas. As the main road in the area passes under US Route 56, depicted above, the guide markers direct drivers seeking to access US Route 56 onto some side streets that serve as "ramps".  Getting a photo of US Route 56 was the objective of a detour I took during my St. Joseph, Missouri trip in May 2014.  This photo from that month might be the only US Route or Interstate photo from the state of Kansas that decade. Roe Avenue, pictured, becomes a piece of US Route 69 farther north.
Back to the nationwide main page.
Back to the home page.