PAUL ACROSS AMERICA
US Route 30 is a coast-to-coast highway from Astoria, Oregon, to Atlantic City, New Jersey.  In Oregon, it runs along the Columbia River forming the northern border of the state, passing through Portland, where it joins Interstate 84 east into Idaho.  In Idaho, US Route 30 continues along Interstate 84 through Boise, and along Interstate 86 to Pocatello.  From Pocatello, US Route 30 zigzags eastward and southward to join the Interstate 80 corridor through southern Wyoming.  In Nebraska, US Route 30 splits to become its own surface road, but that surface road is within a few miles of Interstate 80 all the way to Grand Island.  At Grand Island, US Route 30 heads northeast around the north side of the Omaha area, to form the next major east-west highway in Iowa north of Interstate 80.  US Route 30 is the major east-west highway through Ames and Cedar Rapids.  It crosses into Illinois at Clinton, Iowa, and though it passes through Aurora and Joliet, it dodges the heart of the Chicago area to pass into Indiana.  US Route 30 stays south of Interstate 80 in Indiana and Ohio, running somewhat toward the north end of those states.  It passes through Fort Wayne, Indiana, and Canton, Ohio, but manages to stay south of the other major cities.  US Route 30 leaves Ohio by crossing the Ohio River into the very northern tip of West Virginia.  US Route 30 finishes its journey by crossing southern Pennsylvania, ramming through downtown Philadelphia, and situating itself in downtown Atlantic City, New Jersey. 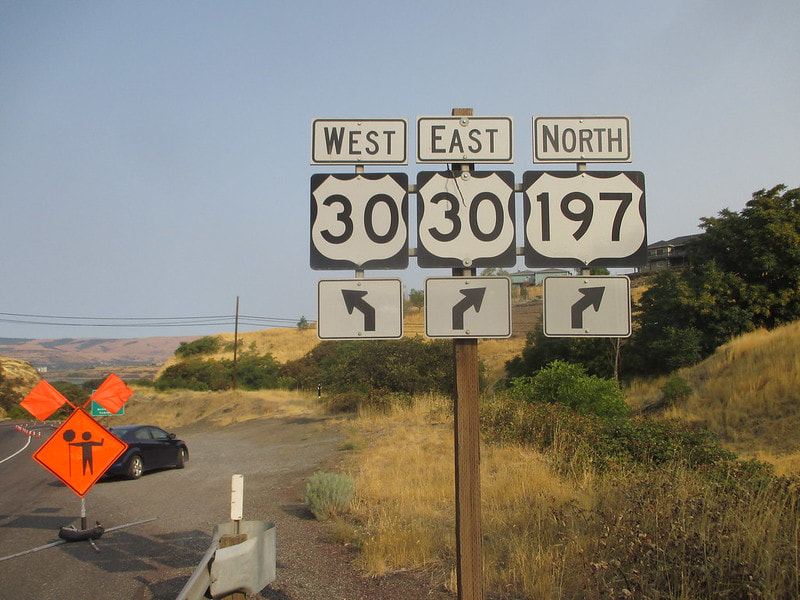 My photo for US Route 30 comes from The Dalles, Oregon.  The signage depicted faces southeast down US Route 197, and it communicates to northbound travelers how to access US Route 30 or stay on US Route 197.  US Route 30 comes from a city street exiting The Dalles from the west, and turns north on US Route 197 at the intersection explained by the signage depicted.  That turn onto US Route 197 is to make the quick jaunt north to join Interstate 84 east.  Anyway, this photo was the same photo I used for my US Route 197 shield image, and I took it embarking on the return trip from Astoria, Oregon, in August, 2018.  (I could have taken a photo of US Route 30 at various locations within 50 miles of my house, but I decided to get a cooler photo from Oregon instead.)
Back to the nationwide main page.
Back to the home page.