PAUL ACROSS AMERICA
US Route 199 is fairly short for a US highway, running from US Route 101 in the northwest corner of California, northeastward into Oregon.  The other end of US Route 199 is at Interstate 5 in Grants Pass, Oregon, in the southwest portion of that state.  There aren't many ways to reach the Pacific Coast from Interstate 5 in this region, given the highly mountainous terrain.  Interstate 5 follows a corridor in northern California, Oregon, and Washington, that once was served by the surface highway called US Route 99.  Because of the advent of Interstate 5 along the same route, US Route 99 was deleted.  But the branch of US Route 99 named US Route 199 still lives on to this day (US Route 299 also existed, but that's now California State Highway 299).  On a personal note, US Route 199 is the only US Route I've clinched twice, as I needed to use it to get between Medford, Oregon's airport, and Redwood National and State Parks.  Fire damage closed a portion of California 299 I planned to use to get from Redwood National Park to Lassen Volcanic National Park, so I had to detour back on US Route 199 to get back east to the Interstate 5 corridor. 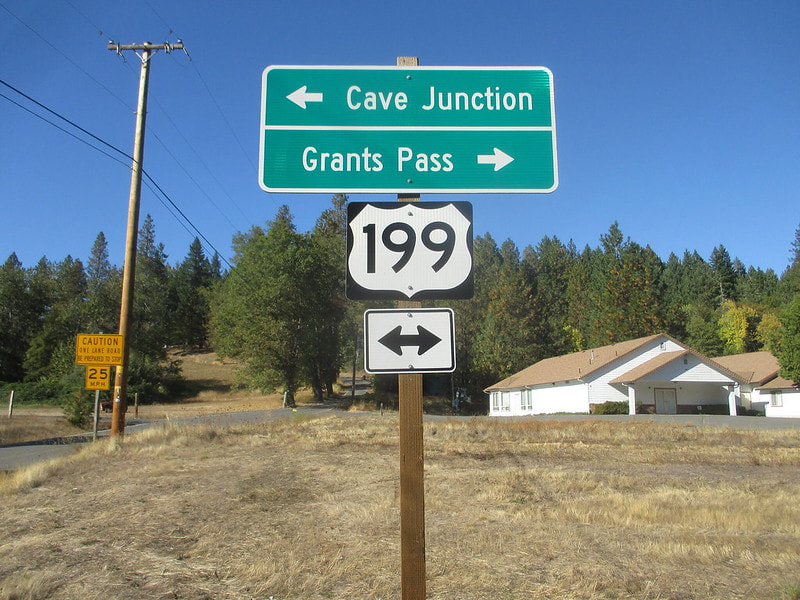 My photo for US Route 199 is at a side road in the outskirts of Grants Pass, Oregon.  Assemblies like this face traffic across US Route 199 waiting at stop signs on various crossroads in the area.  This one faced south, and southward-facing signage has more favorable lighting for photos in the northern hemisphere (the sun is south of us).  The photo was taken in October 2017 at the beginning of a trip to Redwood, Crater Lake, and Lassen Volcanic National Parks, after just landing at Medford's airport.
Back to the nationwide main page.
Back to the home page.