PAUL ACROSS AMERICA
US Route 412 is an east-west route from Columbia, Tennessee, west to northeastern New Mexico.  It's an important east-west in northern Oklahoma, including Tulsa and the state's panhandle, and in northern Arkansas.  It provides an important crossing of the Mississippi River, connecting the Missouri bootheel to northwestern Tennessee (Interstate 155 is also designated along this crossing).  The western end in Springer, New Mexico, is at Interstate 25, and US Route 412 is concurrent with US Route 56 for all of its length in New Mexico.  Conversely, the eastern end at Interstate 65 sits just east of Columbia, Tennessee, halfway between Nashville and the Tennessee/Alabama border.  US Route 412 is one of three US highways with anomalous numbers in the 400's, with no connection to the routes numbered 400 less than them.  It spends all of its distance west of Guymon, Oklahoma, duplexed with US Route 56 or US Route 64, and it spends half of its distance in Arkansas duplexed with US Route 62, leading some to question why this was even signed in the first place.  Still, it serves an important role as the main east-west highway reaching Tulsa, and from Interstate 35 east to Interstate 49 in Springdale, Arkansas, it's either a freeway or at least an expressway. 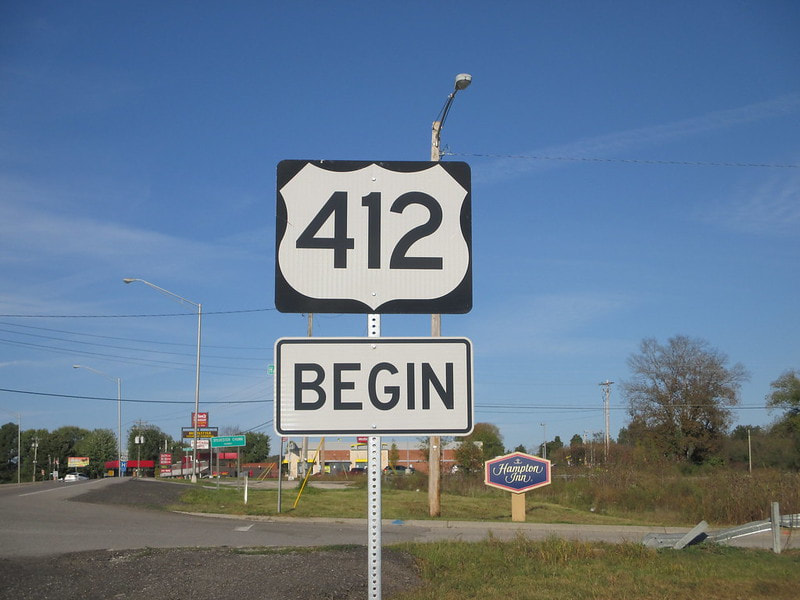 My photo for US Route 412 was taken during my October 2014 trip to the Gulf Coast.  The sign assembly depicted sits at the eastern beginning of US Route 412 at Interstate 65 near Columbia, Tennessee; it's a begin marker!  You don't see these too frequently!  I stayed at one of the hotels at this junction, and started my morning by taking this picture.  Signs facing east are best photographed with the aperture facing west, and signs with the aperture facing west have the best lighting when the sun is to the east. You'll find me taking more photos of signs facing east in the morning, and you'll see me taking more photos of signs facing west toward evening.