PAUL ACROSS AMERICA
Interstate 69 has long connected Indianapolis, Indiana, to points to the northwest, like Fort Wayne and Lansing, ending in Port Huron, Michigan.  The future of Interstate 69 is much more extraordinary, as an extension is planned all the way to the Mexican border in southern Texas.  For now, the northern end of Interstate 69 is shared with the eastern end of Interstate 94, at the bridge crossing between Port Huron, Michigan, and Sarnia, Ontario.  This international bridge crossing is by the southern tip of Lake Huron.  The first section of Interstate 69 runs west through Flint to Lansing, Michigan, where it turns southerly into northeastern Indiana.  The Interstate then becomes the only major freeway passing through the Fort Wayne area.  The longstanding stretch of Interstate 69 ends on the northeast side of Indianapolis at Interstate 465.  Indiana's DOT is currently working on constructing Interstate 69's southwestern extension to the part of US Route 41 connecting Evansville, Indiana, to Henderson, Kentucky.  The southern two-thirds of the Indiana extension are complete, but the section just south of Indianapolis is still in development.  The Kentucky portion of Interstate 69 is mostly completed, extending from Henderson southwest to Fulton.  The portion in western Tennessee hasn't been built, but it will follow the current US Route 51 corridor to Memphis.  A small east-west segment in the northwest corner of Mississippi is completed.  From there, it will continue southwest across Arkansas, northern Louisiana, and eastern Texas.  Interstate 69 is signed along a short northeast-southwest segment of freeway across the Houston area, concurrent with US Route 59.  Interstate 69 will continue southwest from Houston to the Mexican border, at one, two, or three possible places (decisions still need to be made). 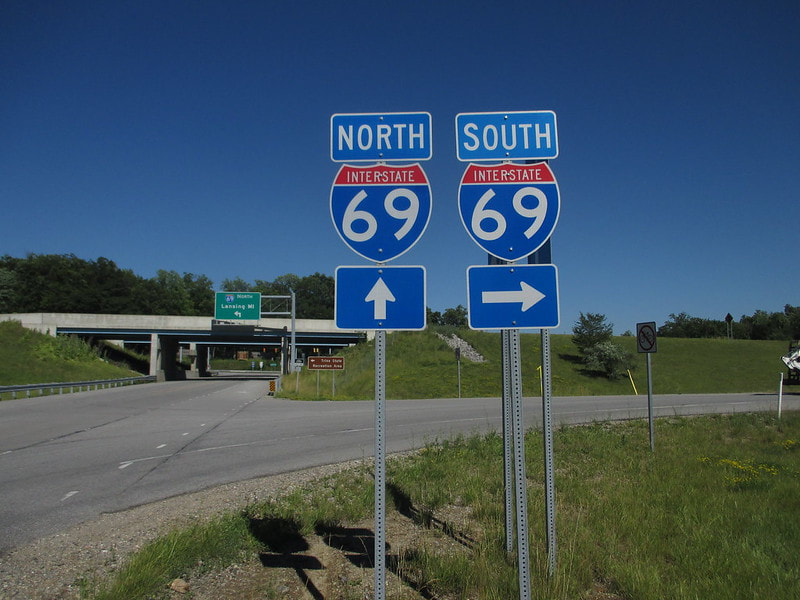 My photo of an Interstate 69 marker comes from the first interchange south of the Indiana Toll Road (Interstates 80 and 90), with Indiana Routes 127 and 727 in northeastern Indiana. The guide markers depicted face west along the road carrying Indiana Route 127, showing eastbound traffic where the onramps are.  The aperture faces east, and Interstate 69 runs north-south. This photo comes from June 2016, while I was routesnapping Indiana on a state level.
Back to the nationwide main page.
Back to the home page.