PAUL ACROSS AMERICA
US Route 159 is a short alternate route to US Route 59, zigzagging through rural areas to the west and north of St. Joseph, Missouri.  The overall route is shaped like a backward question mark, minus the dot.  In Nortonville, Kansas, US Route 59 turns from a northerly path to a northeasterly one, so it can more directly serve St. Joseph, Missouri.  At that point, US Route 159 heads north to Hiawatha, Kansas, and Falls City, Nebraska.  At Falls City, Nebraska, in that state's southeastern corner, US Route 159 turns easterly to cross into Missouri.  It ends at another portion of US Route 59 near Interstate 29, north of St. Joseph, near a town called Mound City, Missouri. 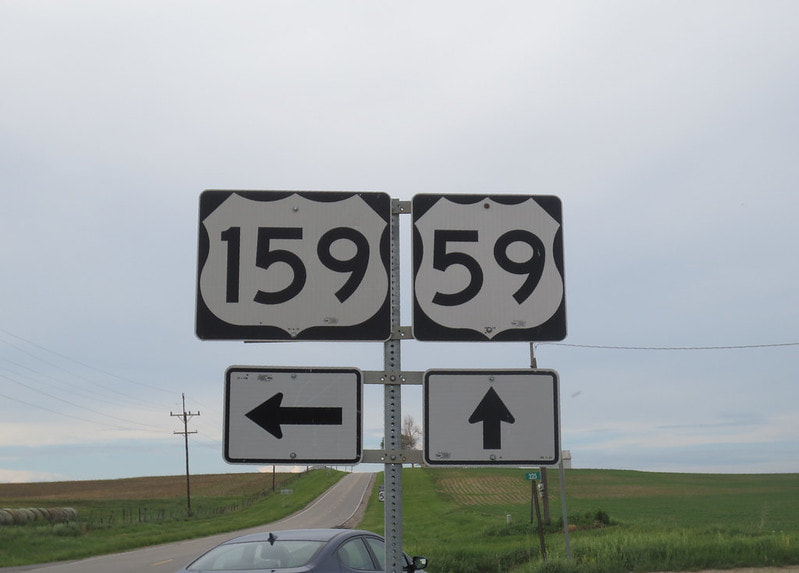 My photo from US Route 159 comes from its northeastern end at US Route 59, near Mound City, Missouri.  This sign assembly in the northwest corner of Missouri faces south, and it can be reached easily via a quick detour from Interstate 29.  My older pictures tend to be the ones where the signage takes up nearly the entire frame; this photo was taken in May 2014 as part of my first trip dedicated to my national sign collection.  That trip was the one to the St. Joseph area.
Back to the nationwide main page.
Back to the home page.