PAUL ACROSS AMERICA
US Route 29 is somewhat of a diagonal route from the Baltimore area southwest to Pensacola, Florida.  The northern end is near Ellicott City, Maryland, at an interchange with Interstate 70; this is just west of Baltimore.  US Route 29 heads southwest from here through the heart of Washington, D.C., to become an important route through Virginia.  In Virginia, it passes through Warrenton, Culpeper, Charlottesville, Lynchburg, and Danville, where it crosses into North Carolina.  US Route 29 continues south to Greensboro, North Carolina, where Interstate 85 starts following alongside it to Charlotte and the Upstate of South Carolina.  As US Route 29 heads southwest out of South Carolina, it dips south of Interstate 85 to connect to Athens, Georgia, but it joins US Route 78 west so it can get back to the Interstate 85 corridor in Atlanta.  It runs alongside Interstate 85 from Atlanta to Tuskegee, Alabama, where it dives southerly to south-central Alabama and the western end of the Florida panhandle.  The southern end is at US Route 90 and US Route 98 in downtown Pensacola, Florida.  The southernmost portion in Alabama and Florida is what gives US Route 29 its number (diagonal routes' numbers can only hope to represent a portion of its routing). 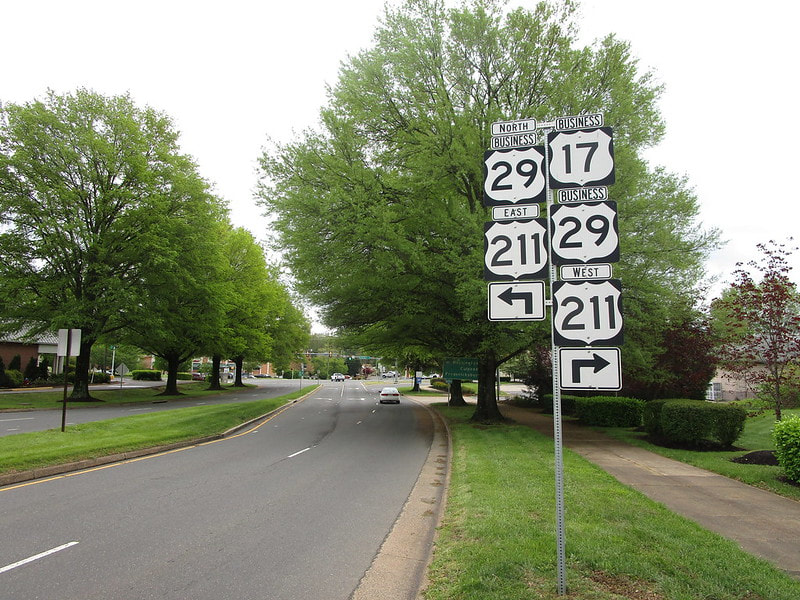 My photo for US Route 29 comes from Warrenton, Virginia.  Expressway bypasses have been constructed for the US Routes around Warrenton, but the former routes into town still exist and are maintained as business routes.  The signage depicted shows an assembly pointing north toward southbound traffic on Business US Route 17. The signage explains the options drivers have as they approach US Route 211, which also carries US Route 29's business alignment.  Many of the route marker assemblies in Warrenton are obscenely tiny, but this one was appropriately sized.  I took this photo as part of the Virginia trip in April, 2021.
Back to the nationwide main page.
Back to the home page.