PAUL ACROSS AMERICA
Two separate highways in the United States are labeled as "US Route 2".  This page covers the longer, western route, in the Upper Midwest and mountainous northwestern states.  For the other US Route 2 through New England, click here.

The western US Route 2 runs across the northern portions of Michigan, Wisconsin, Minnesota, North Dakota, Montana, Idaho, and Washington.  Having the lowest even whole number in existence, it had better be a northerly route!  (I suppose we could have numbered it "US Route 0", which might be a good idea now that I think about it...)  The eastern end of US Route 2 is at Interstate 75 in St. Ignace, Michigan, at the northern approach to the Mackinac Bridge. From there, US Route 2 runs west across the entire Upper Peninsula of Michigan, tending toward the southern end of the Peninsula.  US Route 2 flirts with Wisconsin near Iron Mountain, crossing in and out of the state briefly.  Then, at Hayward, Wisconsin, US Route 2 really enters the state.  US Route 2 stays somewhat near the shoreline of Lake Superior in far northern Wisconsin, crossing from Superior, Wisconsin, into Duluth, Minnesota.  The route crosses northern Minnesota to enter North Dakota at Grand Forks.  US Route 2 then spans the with of northern Montana, a much greater feat than its spanning of northern Idaho, which only takes 80 miles, even with its indirect routing.  Crossing from Idaho into Washington, US Route 2 dives south to Spokane.  In Spokane, US Route 2 turns westerly to stay north of Interstate 90, which curves southwesterly from Spokane for a bit.  US Route 2 crosses the rest of Washington State paralleling Interstate 90 to the north.  The western end is in Everett, at Interstate 5. 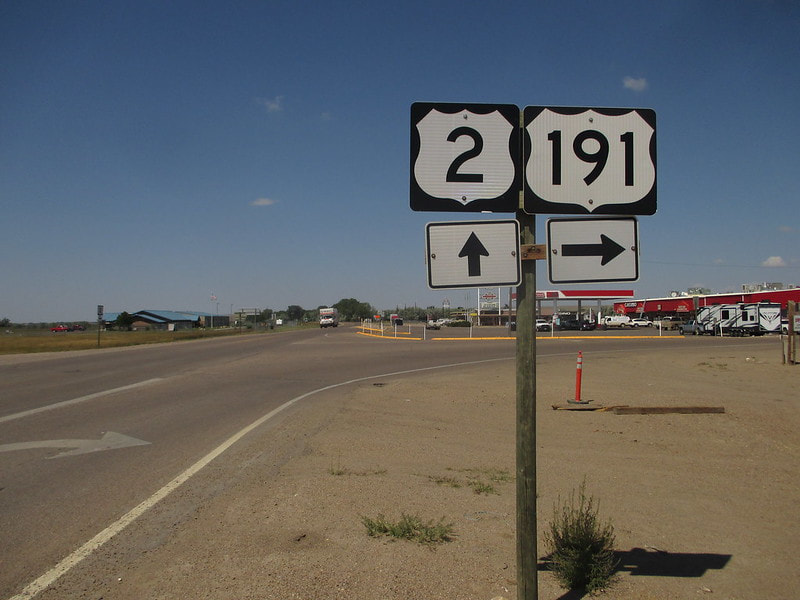 My photo of the western iteration of US Route 2 comes from Malta, Montana.  I drove the stretch of US Route 2 from Wolf Point to Columbia Falls in Montana, as part of the westward leg of the August 2018 trip to the Pacific Ocean, by way of Glacier National Park.  It was a long journey, taking up most of the daylight hours on that summer day.  The sign assembly depicted faces east, at the western end of the short concurrency shared by US Route 2 and US Route 191.  At the junction in the photo, US Route 191 turns northerly toward the Canadian border, while US Route 2 presses onward toward the west.
Back to the nationwide main page.
Back to the home page.